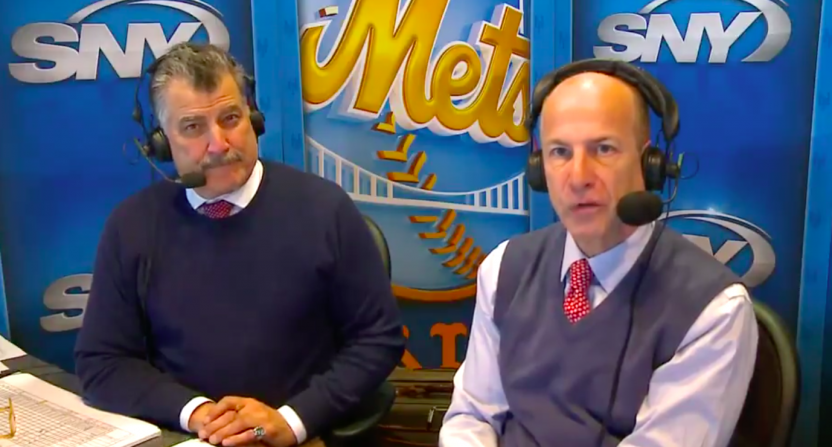 The announcer’s jinx is one of the foremost elements of sports broadcasting. Whenever an announcer mentions a notable streak or an occurrence that is sure to happen, the exact opposite occurs. Think about an announcer that highlights a player’s consecutive free throw streak. What happens the very next free throw? It’s a brick. Or a field goal kicker that may have made all their attempts from a certain yardage during the season—the ultimate kiss of death. And that’s even before you get to all the discussion about if and how announcers should mention in-progress no-hitter bids.

But usually when we talk about the announcer’s jinx, it’s when a player has something bad happen to them. In this case, though, the shoe is on the other foot.

During tonight’s Mets-Nationals game, Mets’ analyst Keith Hernandez (seen above with play-by-play announcer Gary Cohen during an April game) remarked that young Nationals phenom Juan Soto was “not a home run hitter” in spite of some fairly impressive numbers thus far in his career (22 home runs in 116 games in his MLB debut last year, five in 37 games this year heading into Tuesday night). What did Soto do in the very same at-bat? He didn’t just hit a home run, he launched one beyond the second deck at Citi Field.

This is particularly funny for the Nats’ official Twitter account making light of the Mets’ announcer’s jinx. Now that we can see the announcer’s jinx sometimes carries over to actually benefit players, perhaps we’ll see broadcasters around sports trying to use this new strategy to their team’s advantage.