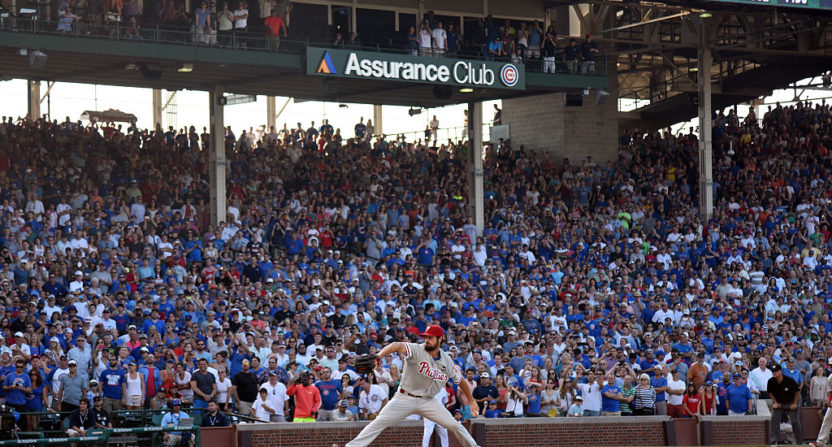 Five innings into the Nationals’ June 21 game against the Marlins, Washington ace Max Scherzer induced Miami shortstop JT Riddle to one-hop to second to close another hitless frame. As Scherzer walked off the mound, MASN play-by-play announcer Bob Carpenter declared that the pitcher was “untouched,” and color commentator F.P. Santangelo suggested vaguely that viewers remain in the “same seats.”

Over the next three innings, Carpenter and Santangelo hinted that Scherzer was having a noteworthy afternoon but stopped short of revealing exactly what was happening. Only after A.J. Ellis singled in the eighth inning on a comebacker off Scherzer’s glove did Carpenter use the words on everyone’s mind: “no-hitter.”

For as long as announcers have called baseball games, they’ve faced a choice in how to handle a no-no. They can either bluntly declare that there’s history in progress, or they can dance around the subject in homage to the on-field tradition of keeping the words “no-hitter” as far away from the pitcher as possible.

Awful Announcing recently asked both fans and broadcasters their opinions on how best to call a no-no and found some fierce opinions on both sides of the divide.

Dave Sims, who has called two perfect games and two other no-hitters as the television voice of the Seattle Mariners, believes strongly in alerting the viewer to the history in progress.

“I’m not beholden to some dugout jinx or perceived jinx,” Sims told Awful Announcing. “That tradition has nothing to do with me. I’m a broadcaster, I’m a story-teller, and you’ve got to let people know what the hell is going on.”

But, as any internet-enabled broadcaster who’s said the word “no-hitter” on air knows, there’s a cost to telling fans what they’re watching, and it comes in the form of Twitter replies. Inevitably, a loud segment of viewers will interpret any potential jinx as a traitorous attack on their team’s pitcher and let the offending broadcast know about it online.

Cubs play-by-play man Len Kasper is one of the most vocal skeptics of the no-hitter jinx and also the broadcaster most often accused of propagating said poxes. Kasper heard from hordes of angry fans when he supposedly jinxed a Jake Arrieta no-no in 2014 and then again when he cursed a Jon Lester attempt the following season.

“I feel like we’ve lost our way, somewhere along the line, where fans think we have some sort of mystical control over what happens,” Kasper, who has called three MLB no-hitters, told Awful Announcing.

But backlash from fans has not dramatically changed how Kasper describes no-nos.

“I don’t feel like from an announcer’s standpoint that we have the luxury of not telling people what’s going on,” he said. “I would never want someone to turn the game and say, ‘Oh, it’s 6-0, must not be very exciting,’ and turn the game off and find out later, ‘What, I just missed a no-hitter?’ So I do feel like telling the viewer what they’re watching is very important.”

Both Kasper and Sims point out that legendary Dodgers play-by-play man Vin Scully called 20 no-hitters and three perfect games, without ever bowing to the fear of a jinx. They can also list other great broadcasters, from Jack Brickhouse to Marty Brennaman, who have shared that approach, thereby proving, in their minds, that jinxes are nothing but folly.

But while most Major League broadcast teams seem to side with Kasper and Sims, there are certainly some dissenters.

Angels play-by-play voice Victor Rojas, whose father Cookie played and managed in the Majors, avoids talk of no-hitters as they develop, in deference to player superstitions. And although he has been criticized for failing to inform viewers, he stands by his decision to honor the jinx.

Just Wednesday night, Rojas got a chance to test his no-hitter muscles, when Angels pitcher Alex Meyer blanked the Nationals through 5 2/3 innings. Rojas noted after the fourth that Washington had gone, “12 up, 12 down,” and he signed off the fifth by saying, “One base-runner, the two-out walk. That is all Alex Meyer has allowed tonight.” Though he didn’t explicitly mention the no-no until it was over, any fan paying even cursory attention would have picked up on the hints or noticed the graphics displaying Meyer’s hitless stat line. Rojas seemed to successfully avoid a “jinx” without keeping the facts of the game from viewers.

Of the broadcasters interviewed for this story, the most adamantly anti-superstitious was, surprisingly, someone who once threw a no-hitter himself. Al Leiter pitched parts of 19 seasons in the Major Leagues, winning two World Series, reaching two All-Star Games and throwing the first no-no in Marlins team history, May 11, 1996 against the Rockies. Leiter, now an MLB Network analyst who also calls Yankee games for YES Network, says he believed in jinxes during his playing career but struggles to see how they could ever reach the broadcast booth.

“I think it’s ridiculous,” Leiter told Awful Announcing. “Having thrown a no-hitter, I don’t believe in a jinx from somebody who is far away that’s not in earshot of the action. I find it comical, amusing or silly.”

Leiter, well-versed in baseball’s famous unwritten rules, says talking about a no-hitter is taboo only when the pitcher can hear you.

“If we’re broadcasting a game from the dugout, and the guy who’s throwing the no-hitter is sitting next to you, then I would be mindful of it,” he said. “Because now my comment could actually affect his stress level, actually affect him thinking about it. But if you’re not in earshot, he doesn’t know what people are saying and not saying.”

Leiter’s perspective seems to represent that of most players. Kasper, Sims, and Leiter all say they’ve never received a complaint from an active player or manager about their willingness to “jinx” a no-no on air.

Given that players don’t seem to care, the most compelling argument for avoiding no-hitter talk has to do with the fans. By adhering to a superstition that’s sacred among players, broadcasters invite viewers into the hallowed world of baseball tradition, allowing them to feel that they have an effect on the games they care deeply about. In theory, at least, that might be appealing to the folks watching at home.

But what do fans actually want? We posed that question on Twitter and found a substantial, if not overwhelming, preference for broadcasters who tell viewers what they’re seeing.

Gathering public opinion for a story. When your team's pitcher is throwing a no-hitter, do you want the broadcasters to…

People who believe in jinxes, we were told, are “morons,” “gullible fools,” “superstitious freaks” and “pretty silly.”

But it also became clear that some fans appreciate the mysticism of the no-hitter jinx. They enjoy the superstition even if they know it is a bit irrational.

I just think baseball's dumb superstitions are fun. This is like hopping the foul line or wearing lucky cleats etc. Stupid but I like it

I actually know it's not a jinx; I just like the tradition.

I don't really believe in jinxes … okay, I sorta do! Ha.

In the end, there’s room for compromise. Even Kasper, the face of the broadcaster jinx, is sensitive to fans who don’t want him to say that magic words. He says he tries not to be gratuitous with his “no-hitter” mentions, out of respect for those annoyed by them. In exchange, he asks fans to understand why he feels obligated to explain what’s going on.

“I think most people are criticizing with a wink and a nod,” Kasper said. “I have a hard time believing someone’s actually angry that me, saying it means that it won’t happen.”

Still, Kasper admits it can be frustrating to be blamed for something so clearly out of his control, and Sims knows the feeling as well. He remembers one time in 2010 when he announced that Mariners starter Doug Fister had a no-hitter through six innings, only to watch Fister serve up a single on the very next pitch. The outrage from fans came quickly, but Sims had a simple and persuasive retort at the ready: “It’s not my fault he threw a pitch right down the middle and it got smoked.”