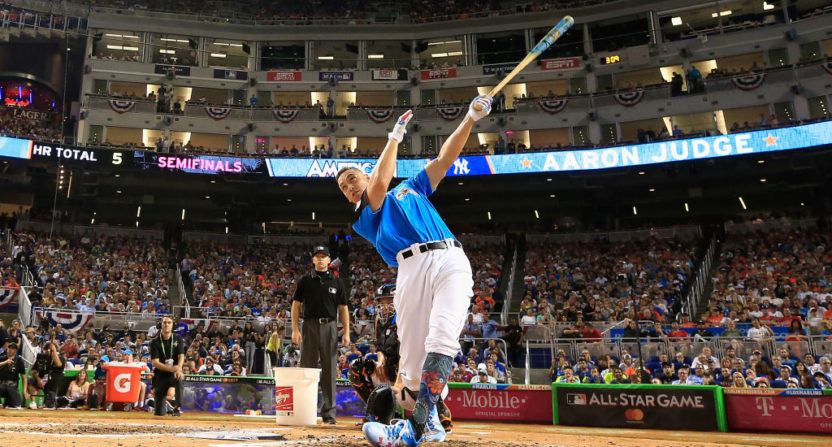 While the 2018 MLB Home Run Derby produced a thrilling finish (and a controversy), it didn’t bring in a lot of viewers for ESPN. As per Richard Deitsch of The Athletic, this year’s edition (won by Nationals’ star Bryce Harper) saw a massive year-over-year drop. Deitsch suggests that Yankees’ star (and defending champion; he’s seen above during the 2017 contest) Aaron Judge’s absence played a role, as did improved ratings for political news and analysis shows:https://twitter.com/richarddeitsch/status/1019323838557929472Political news may have played a role there, but the absence of Judge is also notable. New York remains the largest U.S. media market with an estimated 7,074,750 million TV households for the 2017-18 season, and while not all of those are baseball fans of any variety or Yankees’ fans in particular, there’s a significant portion of Yankees’ fans there (which helps speak to the remarkable $4 billion-plus valuation of Fox’s 80 percent stake in YES).And yes, the No. 2 and No. 3 markets (Los Angeles and Chicago, with 5,318,630 and 3,299,720 TV households respectively) were represented in these contestants, but even combining those numbers gives you around 8.6 million, so each of those markets individually is nowhere near New York. Meanwhile, last year saw two Yankees’ players (Judge and Gary Sanchez), plus a Dodger (Cody Bellinger), and then a variety of others. And Judge sitting out the Derby this year may have particularly hurt.Beyond markets, Judge was a tremendous storyline last year, hitting a MLB-high 30 home runs as a rookie heading into the all-star break. It seemed that every night saw another ludicrous Judge home run. And that created a lot of interest about his participation in the Home Run Derby, and he delivered, posting a total of 47 home runs. That included shots of 501, 504, 507 and 513 feet, and the latter two are the longest home runs ever tracked by Statcast under any circumstances. And Judge started off the Derby in great form, blasting 23 first-round home runs to edge the Miami Marlins’ Justin Bour. That helped create social media buzz around what he was doing and helped get people to tune in and stick around, important for a broadcast’s TV average.At any rate, this is a disappointing drop for the Home Run Derby, and MLB and ESPN presumably aren’t thrilled about that. But this is still a solid evening cable audience, much better than anything ESPN’s normally getting in July. And while there may be some questions about the Derby going forward, especially with its rules and with legalized betting and integrity enforcement now a discussion point, the event won’t be going away any time soon, at least not while it’s still drawing over five million viewers. But MLB and ESPN might want to pull some strings to see if they can get at least one Yankees’ star to participate next year…[Richard Deitsch on Twitter]