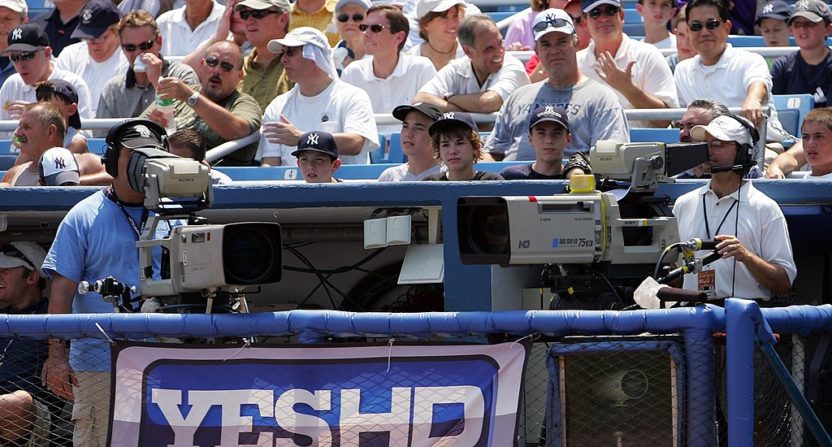 A key part of the Disney and Comcast offers for Fox assets is about the company’s 22 regional sports networks, and YES is the most prominent and most-watched of those. Well, it turns out that YES might not be included in the sale at all. According to Bloomberg’s Scott Soshnick, the New York Yankees (technically, Yankee Global Enterprises, but that’s the Yankees’ parent corporation) which sold 49 percent of the network to Fox (well, technically to NewsCorp, but it was then transferred to Fox) back in November 2012, and an additional 31 percent in January 2014; they still own the remaining 20 percent) have the contractual right to buy YES back in the event of a sale, and they’re contemplating doing just that:

The New York Yankees are considering buying back the YES Network, according to a person familiar with the matter.

The Yankees ceded control of the regional sports network four years ago to Rupert Murdoch’s 21st Century Fox Inc., which increased its stake to 80 percent from 49 percent. That agreement included a clause that gives the baseball team the right to buy back the network in the event Fox puts it up for sale, said the person, who asked to be anonymous because the deal terms are private.

…Its deal with Fox calls for the team to pay fair-market value to buy back the sports network, according to the person.

“It would be worth $4 billion or more by now, based on the success of the Yankees and the fact that it’s in the nation’s No. 1 market,” industry consultant Lee Berke said. “It’s not dropping in value. It’s only increasing.”

That’s a massive chunk of money, but the Yankees certainly have it. However, it’s worth pondering if that kind of a reversal really makes sense for them. When Fox bought its initial 49 percent and then its subsequent 31 percent, YES was valued at around $3.8 billion, so if the fair-market valuation is really $4 billion or higher, they’d be losing some money on the deal. But even more importantly, it would be a strategic reversal; the Yankees didn’t sell part of YES because they needed cash, they did so because it made sense at the time to partner with a media company that had broadcasting experience, assets, other programming, and carriage negotiation leverage. And they would still have that with a sale of Fox’s YES interest to either Disney or Comcast.

Of course, YES is a big enough fish (especially with the Yankee game ratings they’ve been pulling recently) that it could potentially do okay on its own. Even a Yankees-owned-and-run YES would attract broadcast talent, and a lot of cable and satellite operators would still want it. But there would probably be less leverage in those negotiations, as it could no longer be sold to distributors as part of a package deal with other RSNs or national sports networks, and there would be other challenges on the broadcast side for a regional sports network going it alone. (Let’s ask the Pac-12 Networks about how great it is to be independently owned and operated, instead of partnered with Fox or ESPN like the Big Ten Network and the SEC Network.) And YES has already faced some carriage disputes even under the Fox umbrella, including a 2015 one with Comcast. That might get worse as an independent.

There are some regional networks that go it alone, of course, including in-market competitor MSG and nearby NESN. And YES could certainly succeed at a level comparable to those two networks. But there are also plenty of advantages to being part of a larger group of RSNs such as the ones owned by Fox and NBC/Comcast, or even the smaller groups owned by AT&T and Spectrum. And that’s presumably part of why the Yankees sold Fox an interest in YES in the first place. It would be quite the reversal for them to decide four years later that they want to go it alone again, and to spend a higher price to do so, but maybe their views on the landscape have changed. At any rate, this would be a fascinating move if it does happen, and it would take a major piece out of a Fox deal with either Disney or Comcast.