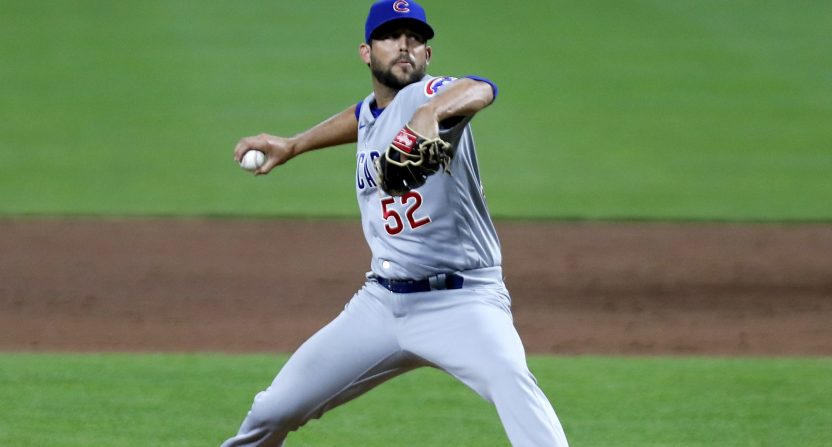 The results of the 2020 National League MVP voting were revealed on Thursday night, with Atlanta Braves first baseman Freddie Freeman winning the award convincingly after receiving 28 first-place votes. The voting results were pretty understandable across the board, except for one 10th-place vote that left everybody bewildered.

Rick Hummel of the St. Louis Post-Dispatch used his 10th-place vote on… Chicago Cubs reliever Ryan Tepera. The Cubs’ right-hander had a 3.92 ERA, 3.34 FIP, and 31 strikeouts over 20 2/3 innings in 2020. A fine season from a middle reliever, but good enough to be anywhere close to the MVP mix? Uh, no.

So, this vote made absolutely zero sense- likely even to Tepera.

Well, Hummel — who was inducted into the Baseball Hall of Fame as the winner of the 2007 J. G. Taylor Spink Award — says that the vote was an “accident,” and says “there’s no way [he] would have voted for [Tepera].”

Hummel told NBC Sports Chicago that he meant to use his 10th-place vote on Washington Nationals shortstop Trea Turner (who finished seventh in MVP voting).

“I’m sure the Tepera family is delighted, but there’s no way I would have voted for him. It was an accident,” said Hummel, whose 10th-place vote for Tepera was easily the shock of the National League MVP voting results released Thursday night that revealed a 1-2 finish for Freddie Freeman and Mookie Betts.

“I fully intended to vote for Trea Turner [10th]. In fact, I remember wrestling with putting two guys in from a last place team,” added Hummel, who had Turner’s Nationals teammate Juan Soto eighth on his ballot.

After being alerted of his Tepera vote, Hummel went back to try and figure out what he did wrong. Hummel believes that he clicked the wrong name on a drop-down menu that featured Tepera’s name just three spots above Turner’s on the electronic voting system.

Hummel, who retraced his steps Thursday night, discovered that Tepera’s name is just three spots above Turner’s on the drop-down menu of eligible players voters were able to use to fill our their ballots. He said the only explanation he can surmise is that he mistakenly clicked the wrong name in the window and then didn’t look closely enough at the confirmation email showing his votes.

Ah, the complications of technology. At least this didn’t happen for a vote that could’ve decided the MVP.

Instead, it just means that Tepera will forever be 18th in 2020 NL MVP voting, even if by accident.