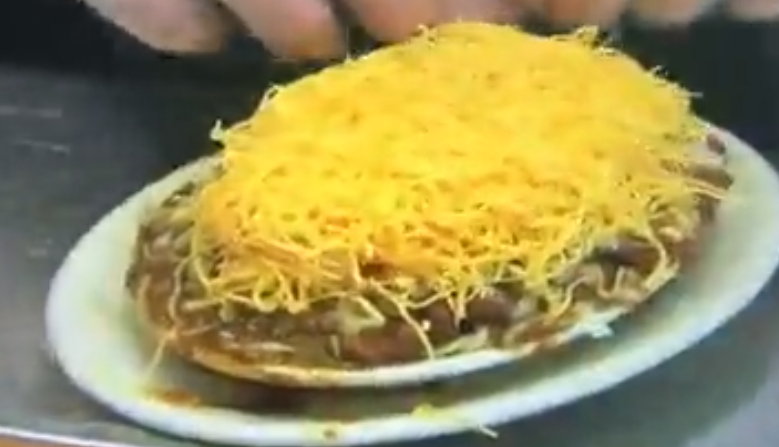 The Mets have had a hell of a few days.

After losing that game, the Mets continued their road trip, heading to Cincinnati for a three-game set. As the Mets were in the middle of a 15-11 victory at the Great American Small Park, SNY cut to a standard “visiting team shot of local food preparation” interstitial. As they’re in Cincinnati, that meant Skyline Chili, and SNY broadcaster Gary Cohen was very much not there for it.

Gary Cohen going IN on skyline chili is all time. pic.twitter.com/ZFCSvbNBzo

“This is the local delicacy known as Skyline Chili. The five-way with the spaghetti and the beans and the cheese. First the disgusting chili gravy. After the onions comes the cheese, and that’s what makes it the five-way. There’s the cheese; they put like ten tons of shredded cheese on there. And this is supposed to be food that you actually eat.”

“I would recommend [it]; you need to try everything once, okay? What doesn’t kill you makes you stronger. Try it once, and then you’ll never eat it again.”

Listen, Cohen isn’t wrong. I have eaten a LOT of shitty food and enjoyed plenty of it over the years. Anyone who knows me, including and especially all prior romantic partners, would likely scoff at the idea of me dispensing any kind of food criticism or elitism. Having said that: it looks awful! Cohen’s criticism is on point throughout.

I’m not telling anyone to like or not like anything. If you love it, either objectively or because it has personal, regional meaning to you: that’s great! But having said all of that…no. Nope. No thanks. All of that looks bad, and placed together it looks like industrial epoxy, and I can only imagine it would have the same effect on my digestive tract.

Most of all, though, this is the kind of moment that really makes a local baseball broadcast. They have to fill 150ish games per year (excluding national broadcasts), and without freedom to be human beings from time to time, it would be horrible for viewers and booths alike. Trolling the opposition at the same time is just a bonus.