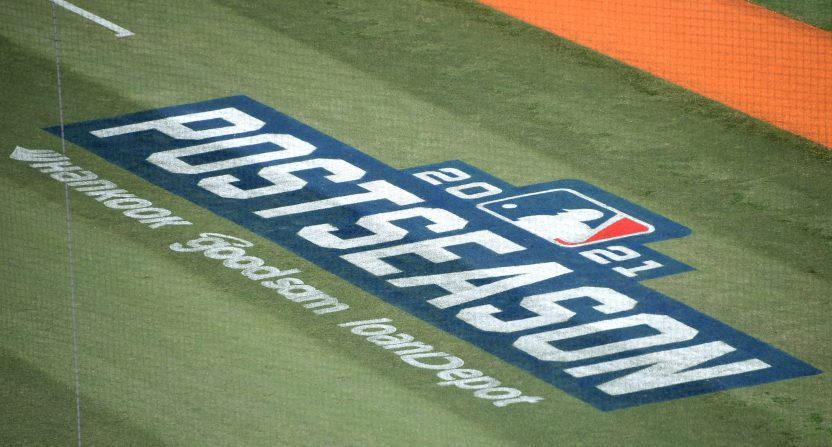 Major League Baseball and the MLBPA agreed to a new collective bargaining agreement on Thursday, and one of the points agreed to was the expansion of the league’s playoffs. 12 teams, up from ten, will compete each year.

re: new 12-team playoff format. The top two division winners get byes. Players proposed No. 1 seed enjoy a reseed advantage after wild-card round. MLB rejected it.

Wild-card round is best-of-3. No ghosts.

Additionally, the Game 163 tiebreaker will bite the dust.

Some details emerging on how the expanded playoffs will work:

* No more Game 163 tiebreakers. All playoff spots will be determined through NFL-type tiebreaker formulas.

So, why is ESPN a winner? Because all of those extra Wild Card games will be on their networks, as part of the company’s new MLB deal announced last year. Here’s a blurb from that article.

As for the postseason, ESPN will have the rights to exclusively broadcast all MLB Wild Card Series starting in 2022, if that format is revived. If the current Wild Card format remains in place, ESPN will exclusively carry one of the two Wild Card Games, and it will gain eight additional regular-season games.

Based on that quote, ESPN will go from one Wild Card game to as many as 12. For context, Fox maxes out at eight Division Series games (with two going to MLB Network) and Turner has a max of ten Division Series games. There’s also the weird potential for ESPN to air more playoff games than Turner over a full Postseason in the event of three sweeps in Turner’s three series and ESPN’s four Wild Card series going to the three game max.

Here’s how the Postseason would have looked in 2021 if the new format existed.

Back in 2020, Wild Card series viewership didn’t light the world on fire, but there were eight series rather than four, and six of those eight matchups ended in two game sweeps. The two decisive Game 3s did quite well, and with the eight teams playing in the Wild Card series going forward being (theoretically) more evenly matched, the series should be more exciting and tighter

The expanded playoffs will cost ESPN $100 million as part of the company’s new TV deal with MLB, but that’s a price they were clearly willing to pay.