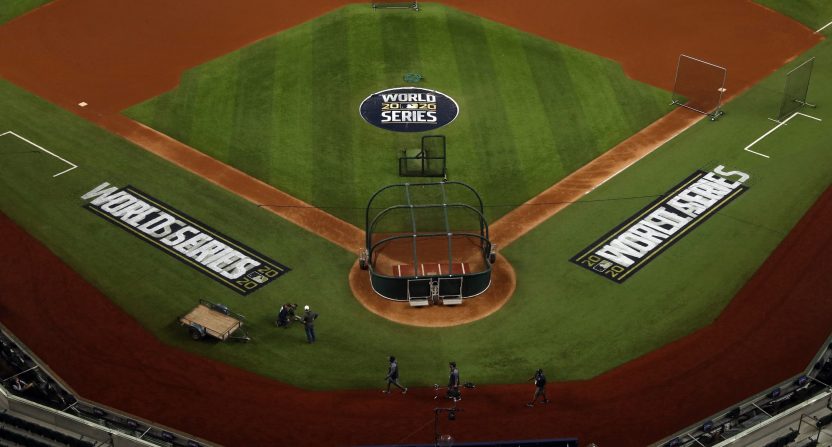 Now that the 2020 MLB Postseason is over, I can stop pretending there’s a chance MLB’s broadcasters will enjoy what they’re watching.

The analysis on television (and online) by ex-players employed by networks has largely been horrible.

This isn’t even a new phenomenon: two years ago, I begged MLB’s analysts to at least pretend to like baseball.

Throughout the Division Series, League Championship Series, and World Series, John Smoltz has spent the bulk of Fox’s MLB broadcasts whining and bitching about everything related to the modern game, from shifts to pitcher usage to the catch-all of “analytics.” Smoltz has complained so much that if you didn’t know he was a former player, you’d wonder why someone who absolutely hated the product on the field in front of them.

In the studio for Fox during the later rounds of the playoffs, Alex Rodriguez has also gone in on analytics, but doing it so ham-fistedly that it’s tough to take him seriously (and don’t even get me started on his over the top, choreographed reaction to the end of Game 4).

MLB Network isn’t exempt, either – Smoltz called one of their two games and played the hits, while the duo of Jim Kaat and Buck Showalter called the network’s other game and did not cover themselves in glory. Hell, at one point, they were waxing poetic about *the pitchout*! It was stunning.

Turner and ESPN did much better jobs at tuning down the negativity, though their games reached far fewer people than Fox’s. For TBS, Brian Anderson and Don Orsillo kept the broadcasts light and focused, and analysts Jeff Francoeur and Ron Darling didn’t spend every other breath pining for the old days and the return of the sacrifice bunt and stolen base. Over on ESPN, Rodriguez’s broadcasts were as rough as they’ve always been, but I felt much better about the other analysts: Chipper Jones, Jessica Mendoza, Eduardo Perez, and (perhaps surprisingly) Rick Sutcliffe. All worked quite well with their partners and broke down their games without falling back on tired (and/or false) tropes.

ESPN also rolled out a whiparound show called Squeeze Play during two Wild Card days of the round, and it was the antithesis of the analysis we would see during the later rounds of the playoffs. Host Jason Benetti and analysts Mike Petriello and Kyle Peterson kept it loose and informative, balancing the chaos of several games at once with coherent analysis (despite Petriello and Peterson coming from vastly different backgrounds in terms of their baseball history). A show like this is completely unnecessary from the Division Series on, when you’re lucky to get two games overlapping, but for the four to eight game a day Wild Card round, it was perfect, especially if you didn’t have a rooting interest in any of the games.

The studio shows for Turner and Fox were a mixed bag. Turner’s new crew of Curtis Granderson, Pedro Martinez, and Jimmy Rollins was fine, though unremarkable. Granderson needs far more reps, but showed promise, and Rollins is improving, but still finding his way. Martinez is one of the better MLB analysts on TV today, and his performance throughout the AL playoffs on TBS did nothing to damper that notion. Fox’s studio coverage has always felt like a showcase for Rodriguez, who dominated too many segments and didn’t add much of anything to the conversation. David Ortiz doesn’t bring much aside from a big personality to the table, and Frank Thomas is still something of an enigma to me. I don’t mind watching him on TV, but I can’t remember one thing of note he’s ever said. The best analyst of the bunch is probably Dontrelle Willis, who was relegated to something of a backup role during Fox’s studio coverage.

Fox did show some promise down the line. Adam Amin and Joe Davis each called an NLDS matchup, and both did great (despite Davis having to work with Smoltz). Amin’s trio with AJ Pierzynski and Adam Wainwright (whose broadcasting experience was next to nil at this point) was informative, entertaining, and forward-thinking, and if Wainwright decides to call it a career, he’ll have no shortage of suitors in the broadcasting world if he decides to go that route.

MLB coverage on its TV partners isn’t doomed, however. There are plenty of strong analysts getting airtime, like Jones, Martinez, Perez, Pierzynski, and Sutcliffe. They’re not uber nerds. They haven’t built the foundation of their analysis around advanced metrics and the new way of playing baseball. But they’re not adverse or outright hostile towards numbers, and instead exhibit curiosity and provide further context to what a modern player, manager, or front office may be thinking. I’d much rather hear a conversation about why a player changed his swing than a pithy comment about exit velocity or launch angle, with zero follow-up and a lengthy silence until the next action on the field.

This Postseason really showed me which analysts baseball needs more of, and which analysts the sport needs fewer of. To be clear, I don’t need every analyst to be able to compute a player’s wOBA in their head. I just don’t want analysts to hear an advanced stat like wOBA mentioned and then go on an extended screed about how analytics are ruining baseball, unlike the days where all you needed was batting average and RBI. The sport has moved on and is smarter now. So should its analysts.