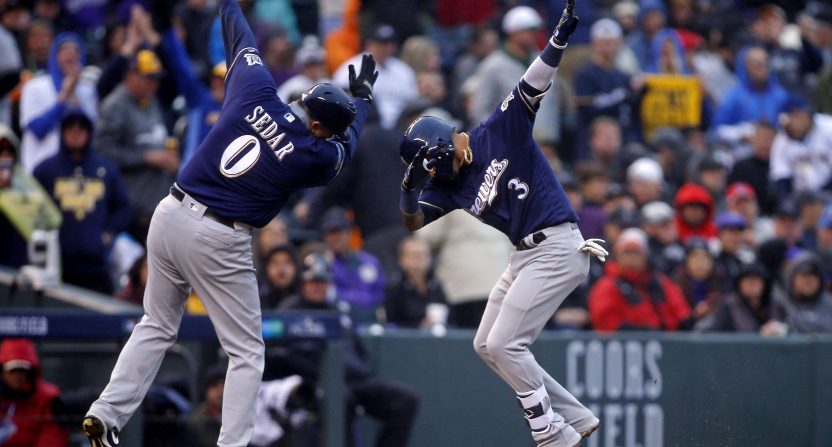 Major League Baseball has had a strong couple of Postseasons over the last couple of years, with especially 2016 and 2017 going down in history and creating moments that will be etched into the minds of fans for lifetimes. This year, we haven’t gotten many of those moments through the first week-plus of the Postseason. The Brewers got a walk-off win in Game 1 of the NLDS, and shut out the Rockies for the rest of the series en route to a sweep. Ronald Acuna became the youngest player to hit a grand slam in Postseason history, but the Braves scored just three runs in the 15 innings after that, falling in four to the Dodgers. Brock Holt hit for the cycle, but the Red Sox won 16-1. The Astros so thoroughly shitkicked the Indians that I can’t tell you one thing that happened in the series.

And because we haven’t gotten those moments (yet, hopefully), I’ve noticed something when listening to the announcers calling the games this Postseason. Quite frankly, it seems like a fair bit of them actually dislike baseball.

On the surface, this is probably somewhat ridiculous to say. “Dislike baseball? That’s crazy! This is their job! They dedicate so much time during the spring, summer, and fall to baseball! How can they *dislike* baseball?”

Simple: they complain about what’s going on directly in front of them and pine for the good ol’ days.

Ron Darling is one offender. During Boston’s 16-1 shellacking of the Yankees in Game 3 of their ALDS matchup, Darling got pissy about the “unwritten rules of the game” when Andrew Benintendi stole a base in the fifth inning with the Red Sox winning 10-1. He also got upset in the seventh inning when Benintendi (him again!) dared to swing the bat in the seventh inning on a 3-0 count. In an attempt to save his own bacon, Darling claimed to “love” MLB’s “let the kids play” ad campaign, but this was something completely different. Okay, cool.

John Smoltz is another offender. He’s hit on nearly every anti-stat cliche in a four game series, which blows my mind, because I swear that he used to be the best analyst on TV maybe a year or two ago. In the Braves-Dodgers series, which he called Game 1 with Bob Costas (more on him in a little bit) and Games 2-4 with Joe Davis, Smoltz has managed to complain (numerous times) about the shift, stolen bases (or the lack thereof), and pitchouts, to name just three topics. I honestly don’t think one person in the world other than John Smoltz really gives a shit that there are fewer pitchouts across baseball in 2018.

Bob Costas is, unsurprisingly, another offender. As he usually does, Costas spent his two playoff broadcasts this season (Game 1 of Braves-Dodgers with Smoltz, Game 3 of Rockies-Brewers with Jim Kaat, who was crotchety as usual) complaining, waxing poetic about the good ol’ days, and, in an exciting new twist, mispronouncing a number of player names. Mispronouncing names is particularly egregious in my opinion, because it shows a lack of preparation in addition to a lack of respect.

Alex Rodriguez also had a bad Postseason in the booth for ESPN during their one playoff game, complaining about rules and being part of a broadcast less compelling that the Statcast-focused broadcast on ESPN2.

I’d be remiss if I didn’t mention the broadcasting highlights from this year’s Postseason, namely the play by play trio of Brian Anderson, Joe Davis, and Don Orsillo. All three have been, at worst, perfectly fine at calling the action in front of them and not editorializing (which Costas has made his signature over the last decade or so). Not coincidentally, all are regular play by play broadcasters for MLB teams, so they know what they’re doing. Unfortunately, in the cases of Anderson and Davis, their analysts are putting them in less than ideal positions with their takes.

A handful of broadcasters in this year’s Postseason really haven’t generated much chatter. Dennis Eckersley, working with Orsillo on the Astros-Indians series, has been fine, saying nothing too memorable, but also not making me facepalm. The trio of Kenny Albert, David Cone, and AJ Pierzynski, who called the first two Brewers-Rockies games in Milwaukee, also didn’t create much of a reaction. Albert’s a pro and just fine, Cone works very well with Michael Kay on YES, and Pierzynski is still getting his feet wet as a broadcaster.

To the LCS and World Series broadcasters, Brian Anderson and Ron Darling (ALCS) and Joe Buck and John Smoltz (NLCS, World Series), I beg you: please don’t spend the broadcasts telling me why baseball today sucks compared to baseball ten, twenty, thirty years ago. Please don’t sit in the booth and criticize concepts that you clearly don’t understand. Please don’t bitch and moan about decorum and unwritten rules and class when a player *dares* to show emotion or try to win the game for his team.

And most importantly, please try (or at least pretend to try) to like baseball.