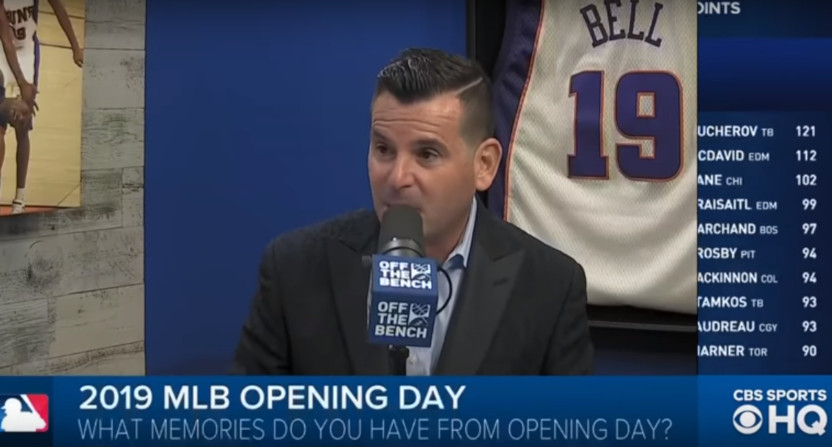 David Samson is an interesting baseball figure, and he’s one that much of the baseball world wound up talking about Friday. That’s thanks to his take on Washington Nationals’ reliever Daniel Hudson being placed on the paternity leave list and missing Game 1 (and possibly Game 2) of the team’s National League Championship Series matchup against the St. Louis Cardinals, which wound up putting up some incredible Twitter Ratio numbers. Here’s that take:

Unreal that Daniel Hudson is on paternity list and missing game 1 of #NLCS . Only excuse would be a problem with the birth or health of baby or mother. If all is well, he needs to get to St. Louis. Inexcusable. Will it matter? #waittosee

That was sent at 6:24 p.m. Eastern on Friday; around an hour later, it had 331 replies, eight retweets, and 22 likes. Converting that to the Triple Crown ratio (batting average/home runs/RBIs, as proposed by Deadspin’s David J. Roth back in 2017) produces some great comparisons of light-hitting, high-average players:

As for Samson himself, he’s now an analyst for CBS Sports HQ (the role he’s seen in above), but his history in baseball goes back much longer than that. He started as the Montreal Expos’ executive vice president in 1999 shortly after his then-stepfather Jeffrey Loria bought the team, he became president of the Florida (then Miami) Marlins in 2002 after Loria swapped the Expos for the Marlins, and he held that role until new owner Derek Jeter fired him in 2017. He was involved in lawsuits and controversies with both the Expos and Marlins.

Samson also appeared on Survivor in 2014, and was the first person voted off the island. He’s also known as a radio guest for a variety of shows, including Dan Le Batard’s, and that led to his infamous appearance at Le Batard’s birthday party at Wynwood Yard in Miami in December 2018. Samson got up on stage, got booed (for many things, presumably, but particularly for his role in getting the city to pay for the new Marlins Park, leading to Loria then selling the team for $1.2 billion), and delivered the following response:

“Thank you so much. Thank you very much. Here’s why I love when you guys boo me. Alright, I want you to keep booing me because guess what? 1.2 billion! Fuck you!”

Samson defended that by saying it was “all in good fun” and Le Batard said it was a skit and Samson was “playing the heel wrestling manager,” and Samson later explained his remarks on Le Batard’s show with “So I get on and all of a sudden the boos start. And in the moment, I said guys, ‘This was my job, I had a job to do and I did the job. So f-u and I did my job. Then the cheers started … We were all in the moment and I was just adjusting to the moment. I am not apologizing for doing my job. I will have fun and will enjoy and be radioactive but one thing I will not take is people questioning whether I have affinity, love and respect for Miami.”

But that certainly didn’t stifle the criticism he took over his speech. And his tweet criticizing paternity leave has only continued to pile up the ratio; it was at 932/16/57 as of 8:45 p.m. Eastern Friday. So congrats to Samson on becoming the greatest average-only hitter in baseball history.