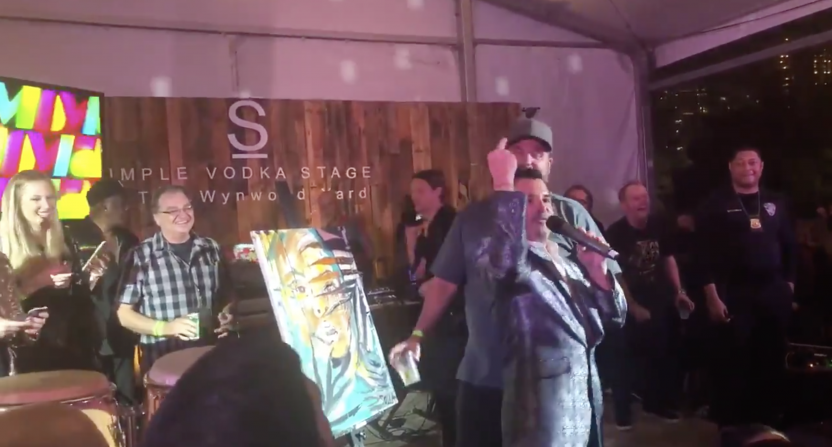 Dan Le Batard’s birthday party sure seemed like it was something. This past Sunday, fans of Le Batard’s show descended on Wynwood Yard in Miami to have some fun. At some point in the party, former Marlins’ president David Samson got up on stage and, well, it depends on who you ask whether or not this was a good idea.

According to the Miami New Times, Samson got up on stage and immediately reacted to the boos he received from fans. The reason there were boos was that Samson and former father-in-law/former Marlins’ owner Jeffrey Loria got the city to give them hundreds of millions of dollars in taxpayer money for Marlins Park. And then once the stadium was completed and the value of the team skyrocketed because of the taxpayer funded stadium, Loria sold the team for $1.2 billion. Samson was on Le Batard’s show a couple weeks ago where they talked about how Loria threatened to fire his son-in-law years ago if he went on Le Batard’s show again while working for the Marlins.

On stage, Samson encouraged the booing. And with Le Batard’s arm draped around Samson, Samson gave it right back to the crowd.

Here is @DavidPSamson’s entrance at Mas Miami. One of the funniest things I’ve seen in quite some time. pic.twitter.com/19x86I2zYA

Samson said, “Thank you so much. Thank you very much. Here’s why I love when you guys boo me. Alright, I want you to keep booing me because guess what? 1.2 billion! Fuck you!”

There was a little bit of applause but the boos were ringing throughout the place. While it would appear as though it was a case of rare honesty from a rich executive saying what he thinks about us poor peons, both Samson and Le Batard tweeted that it was merely a skit and Samson was playing the “heel wrestling manager.”

Actually,not at all how it happened. All on tape and all in good fun. And all for Lebatard’s birthday. No bragging, no fleecing…Ex-MIA Prez Taunts Taxpayers: Former Marlins president David Samson brags about fleecing fans — ‘$1.2 billion. F–k you!’ ?https://t.co/IWoMhr6c6P

These bleeping fun suckers. Samson was playing the heel wrestling manager. No one would seriously wear that jacket. I was booing Samson before taking the mic from him. You don’t get the show, @miaminewtimes. https://t.co/saPL1cMYD4

Look, I’m willing to believe Samson and Le Batard that what was going on was a skit and that they were playing out some sort of WWE storyline where Samson played the heel that fans would boo and hate. For those who watch pro wrestling, think of Samson as Attitude Era Mr. McMahon.

Now, here’s why the “skit” sucked from someone who watches pro wrestling.

1) While fans hated Mr. McMahon the character, that character was hated because we knew that wasn’t the actual Vince McMahon. The heel things that Mr. McMahon did on the show were that he tried to screw over the babyfaces and not the fans. He didn’t take hundreds of millions from the fans in real life and then bragged it to their face that he did it. At least when fans made Vince McMahon a billionaire, McMahon had to provide some sort of entertainment to them.

2) Pro wrestling storylines can be based in reality and doing that could make a storyline better, but it can’t be too “on the nose.” If you’re acting out what actually took place or, if you don’t believe that’s what happened, act out what most people believe happened, don’t be shocked if people don’t get the joke.

3) While heels sometimes get the better of the babyfaces, the babyfaces ultimately prevail at the end and pro wrestling fans are aware of that. It’s like a movie or TV show, even if you know what the outcome will be, an effective and compelling storyline allows you to enjoy the journey that’s taken before its inevitable destination. Something tells me a 20 second skit won’t qualify as an ending payoff where the babyface prevails.

Let’s just call it for what it is. It was a bad joke. Some people may have loved it and if Le Batard loved it, then it’s his birthday and I guess that’s what matters. But it was a bad joke and I’m sure if a local taxpayer was there and felt they were screwed over by Loria and Samson, they wouldn’t have seen the humor in the skit either. Look on the bright side, WWE Raw is terrible so maybe Le Batard and Samson should be writers. Then that way if fans hate what they’re seeing, they can just be told they “don’t get the show.”