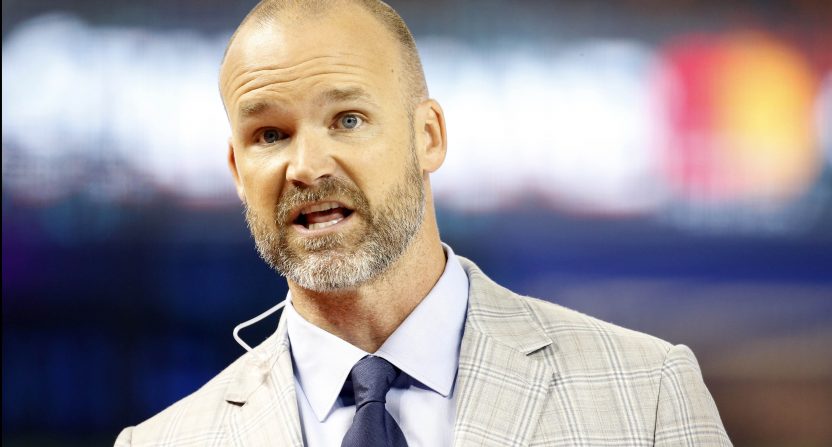 The Cubs are reportedly completing the most obvious managerial hire in recent history, as they’re set to announce David Ross will replace the departed Joe Maddon.

Highly placed source has confirmed to me David Ross is expected to be named Cubs manager this week. His agent has been discussing contractual terms with Theo Epstein. Deal is almost done. More on @ESPN1000 at 9 am. On @NBCSChicago + https://t.co/VqUFW8rK8r throughout the day.

Assuming Kaplan’s timeline is correct, the move is likely to be announced soon, and given MLB’s distaste for anything overshadowing the World Series, official confirmation will likely come on an off day. David Ross spent all or part of 15 seasons catching in the major leagues, including 2015 and 2016 with the Cubs. Ross retired after the 2016 World Series, which included a Game 7 home run off of Andrew Miller.

After retiring, Ross joined ESPN as an analyst, signing a new extension last winter. In addition to his broadcasting duties, Ross also worked as a special assistant to baseball operations for the Cubs the past three seasons. Ross has no coaching experience at any level, but the Cubs front office is clearly very familiar with him, and presumably his experience in the front office counts for something.

Ross beat out Astros bench coach Joe Espada for the job, although Ross taking the reins felt like a formality throughout the process, and indeed felt inevitable since the Cubs decided not to extend Joe Maddon last offseason.

It’s also a move that further highlights the gray area analysts like Ross and Jessica Mendoza operate in. Ross (with the Cubs) and Mendoza (with the Mets) had or have organizational assistant roles while also working as broadcasters. Mendoza occasionally shies away from discussing Mets issues on the air, for example, and it’s possible that other teams might not be happy about Ross essentially never leaving the Cubs organization while still being granted access as though he’s a media member.

Mendoza is an adviser to Mets general manager Brodie Van Wagenen. It was noticeable this year that she was hesitant to talk about the Mets, which made for some awkward moments on and off the air. She would not really address issues involving the team because of her conflict of interest.

The Dodgers, for one, decided not to allow Mendoza or another ESPN analyst, David Ross — a Cubs adviser — to roam the clubhouse during media availability before games, according to sources. A Dodgers spokesman confirmed this policy.

Regardless of that debate, the Cubs have their next manager, and ESPN will probably need another analyst, although given how obvious this move was, they’ve likely had some time to prepare.