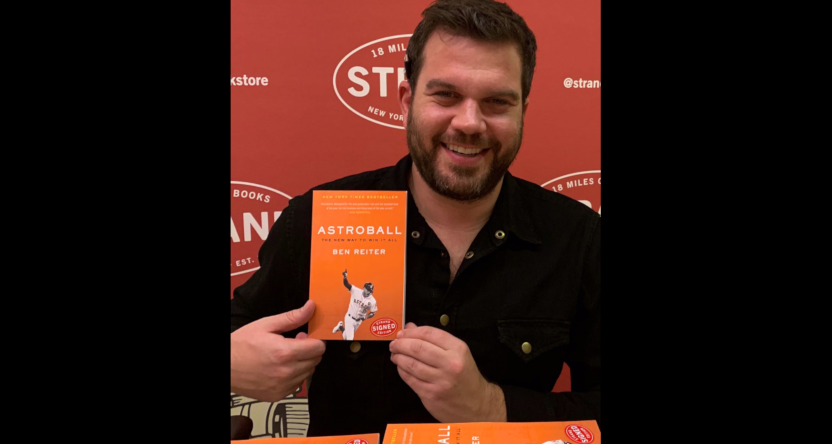 One of the national voices most closely associated with coverage of the Houston Astros is Ben Reiter, the veteran Sports Illustrated writer who predicted the Astros’ 2017 World Series victory in a 2014 cover story and later wrote the New York Times-bestselling book Astroball: The New Way to Win it All. Well, “The New Way To Win It All” has a rather different context now thanks to the many revelations in the Astros’ sign-stealing scandal (including their lackluster partial apologies Thursday), and Reiter recognizes that, referencing that subtitle in a release about a new Cadence13 podcast (and TV series in development from Left/Right) he’s working on, with the first season of this podcast focusing on the Astros and produced by Leon Neyfakh and Andrew Parsons, co-creators of Slow Burn and Fiasco. Here’s more from that release:

Cadence13, a leading premium podcast company, today announced the launch of a new sports documentary podcast franchise that will explore in-depth a wide range of compelling stories and people from the world of sports, with Season One focused on the Houston Astros 2017 World Series-winning season sign-stealing scandal.

…“This is a story that everyone is talking about and partnering with Ben and Leon to deep dive on this scandal should give listeners the best insight and context possible,” said Chris Corcoran, Chief Content Officer, Cadence13. “We are thrilled to expand Cadence13’s powerful lineup of original documentary storytelling with this new franchise.”

“The Astros of the 2010s were the most innovative organization in the history of sports,” said Ben Reiter. “As it turned out, the ‘new way to win it all’ involved factors that no one could have imagined – myself included. Cadence13, Prologue Projects, and Left/Right are the ideal partners with whom to reveal the full story of the Astros’ exhilarating rise and shocking fall.”

“We have long wanted to apply our narrative approach to a story that’s outside the world of politics,” said Leon Neyfakh. “The Astros saga is the perfect place for us to start — in addition to being populated by amazing characters, it forces you to ask yourself hard questions about the meaning of fairness, cheating, and secrecy.”

To be completely clear: I didn’t want to come out with half-baked takes about a story I devoted years of my life to. I’m doing this for one reason: I want to know what happened, and why it happened, and I’m going to do my best to tell the whole story.

That seems like a smart approach to this, and with the series set for a summer 2020 launch, there should be a fair bit of time for Reiter to really dig into what happened here. (And given how much was recently uncovered by Jared Diamond of The Wall Street Journal in a piece that delved much deeper than the information MLB officially released on this, there may still be plenty of revelations to come.) And it’s interesting to see a prominent writer and author critically reevaluate a past book on a team now that much more information has come out on what was actually going on; that certainly isn’t a common sight.

But Reiter’s experience covering the Astros (especially in book-length form) would seem to make him a very good fit for a deep dive into what happened here. And the involvement of Neyfakh and Parsons (known for Slow Burn and Fiasco, podcasts that have covered everything from Watergate to Iran-Contra to Bush vs. Gore) adds some interesting experience on the scandal/crime side. And the Astros’ saga seems to have enough layers that it’s worthy of this kind of exploration. We’ll see how this turns out, but there’s certainly a lot here that could make this worth a listen.