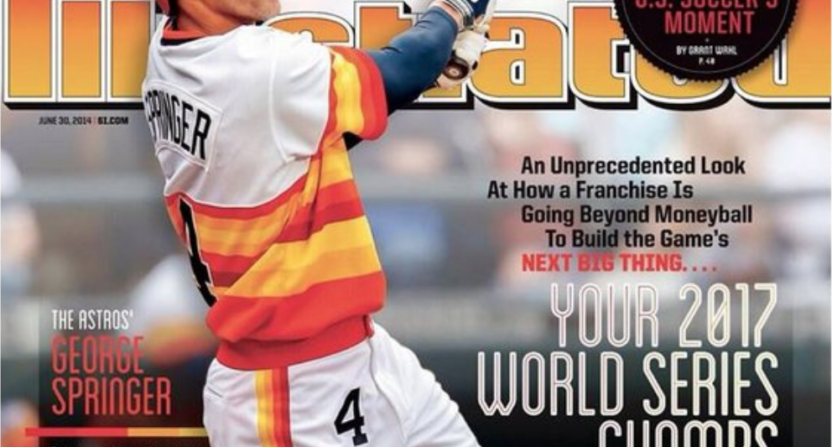 The Houston Astros won the World Series on Wednesday night for the first time in franchise history, and aside from the team and its fans, there might be no one happier than the editors at Sports Illustrated.

If you somehow haven’t heard by now, SI predicted in the summer of 2014, as the Astros were sputtering toward 92 losses, that Houston would eventually be the 2017 world champs. Throughout the Astros’ run this fall, SI reporter Ben Reiter, who wrote the famous cover story, was praised for his foresight, and when Game 7 of the World Series ended Wednesday (with cover-boy George Springer as MVP, no less!) SI drew another round of well-deserved back-pats.

Of course, SI didn’t get the prediction completely on the nose (even before they rescinded the prediction two Aprils in a row). We’re here to tell you what the magazine got right back in 2014 and what it got wrong. 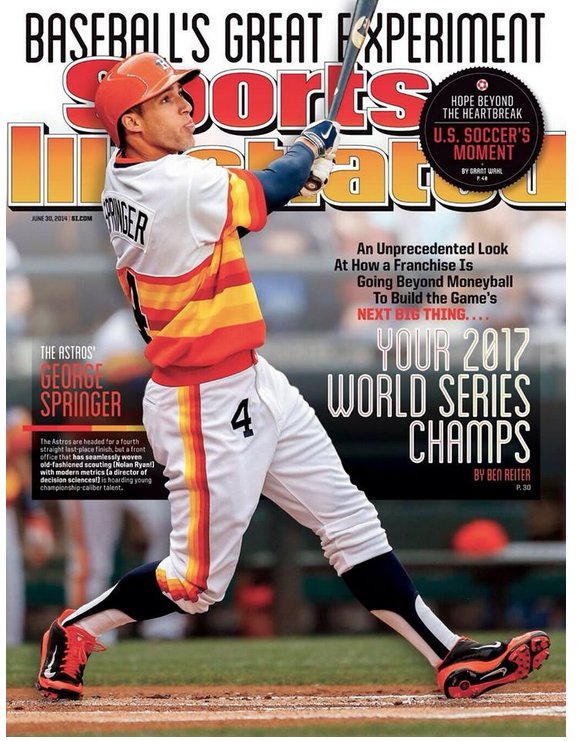 Props to SI managing editor Chris Stone for conceiving of the “Your [insert year] World Series Champs” formulation, meant to give some weight to a cover story about a rebuilding team. And even bigger props to Reiter for settling on 2017. And then extra credit to everyone involved for putting Springer on the cover, more than three years before he would hit five home runs in the World Series to earn MVP honors.

Reiter got tremendous access to the Astros as they decided whom to select with the No. 1 overall pick in the 2014 MLB Draft. They wound up with Brady Aiken, who was mentioned more in the resulting story than any other player.

Area scout Brad Budzinski was similarly unequivocal about Aiken, a 6’ 4” lefty from San Diego’s Cathedral Catholic High who had committed to play at UCLA and who threw a mid-90s fastball to go with a plus curveball and changeup. “I love everything about this kid,” Budzinski said. “To me, we’re getting possibly the next Andy Pettitte. Makeup wise, I feel like it’s Peyton Manning on a surfboard. A lot of people say they want to be a Hall of Famer, but I believe for this kid it’s a realistic goal.”

Years of scouting reports, regressed in Mejdal’s system, all suggested that Aiken was the draft’s best player. Picking someone else simply because he was not a high school pitcher would have been the equivalent of staying on 16 against a dealer’s seven. That is not something Luhnow’s Astros do.

Not only did Aiken never play for the Astros, the team failed to sign him, citing concerns about his arm. They were right — he soon underwent surgery and now has a 5.05 career ERA in the low minors — but that doesn’t change that the player at the center of the SI piece was not even slightly part of the team’s eventual success.

The crux of Reiter’s cover story was that the Astros were using data better and more thoroughly than anyone had before. He praised general manager Jeff Luhnow and analytics guru Sig Mejdal for tearing down the Astros and rebuilding them with purpose.

Only weeks later, Houston failed to sign Aiken, the industry began to frame the organization as incompetent, and Reiter’s praise appeared almost foolish. But Luhnow and Mejdal used the compensation pick from failing to sign Aiken to nab Alex Bregman and eventually built a championship team full of players they drafted, signed or traded for. In the end, they were two heroes of the Astros’ success and thus appropriate heroes of Reiter’s story.

In the paragraph that Reiter first mentioned Springer as a budding star, he paired the outfielder with first baseman Jon Singleton, another top prospect, who wound up busting out of the Majors within a year and a half. The SI piece did cite Dallas Keuchel… alongside Jarred Cosart and Brett Oberholtzer, who did not become stars for the Astros or for any other team since. You can’t nail ’em all.

Reiter’s piece may have identified some false positives as far as future stars go, but it hit on the three position players who became centerpieces of the Astros’ World Series team. Springer was credited with having “energized the club with both his constant dance moves and his 12 home runs in his first 47 games.” Altuve, who was leading the AL in batting average at the time, is mentioned only once but framed as the lone position-player holdover from the rebuild worth watching. And Correa, who had been selected first overall in 2012, got several praising sentences.

The Astros had decided on less volatile categories of players with their two previous one-one picks. In 2012 they selected a 6’ 4” high school shortstop from Puerto Rico named Carlos Correa. The pick surprised the industry, but Elias had deep convictions about Correa from scouting him extensively when he was with the Cardinals, Mejdal’s system liked him, and Correa had indicated that he would sign a contract that would be relatively cheap for a one-one. This year Correa was rated by Baseball America as the sport’s seventh-best prospect.

Alongside Reiter’s main story, Hoffer penned a light-hearted sidebar “from the future” about how the Astros won the 2017 World Series. The details were a bit off, with predictions of Uber Park, Mejdal’s Dr. Who costume, manager Bo Porter, and Cy Young contender Mark Appel missing the mark. But we can hardly quibble with the little things when we’re talking about a piece predicting, three years ago, the 2017 World Series champion Houston Astros.