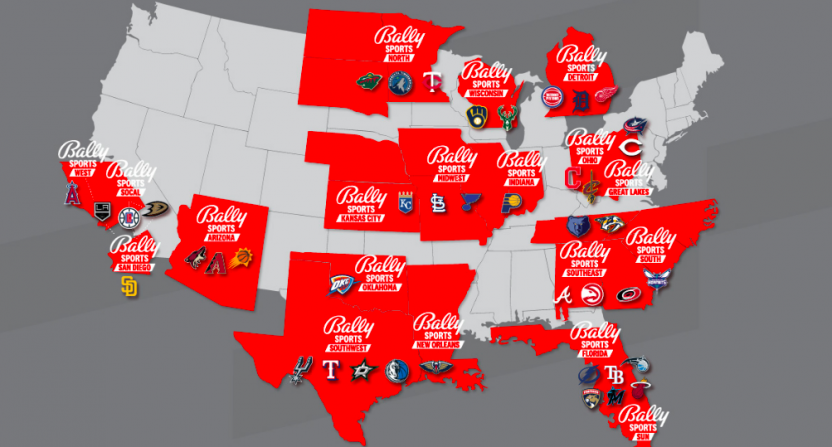 Sinclair Broadcasting knew what it was getting into when it purchased the 21 regional sports networks from Disney in 2019. But they weren’t quite prepared for the pandemic that followed, which exacerbated a lot of the issues that made these networks so unpalatable to their previous owner. In late 2020, they announced that they took a $4.23 billion charge “related mostly to the regional sports networks business” and posted a $3.21 billion loss for the third quarter.

In the months since things haven’t gotten too much better on that end. Sportico’s Anthony Crupi reports that, per a recent filing with the Securities Exchange Commission (SEC), Sinclair finds itself on the hook for $1.82 billion in rights fees in 2021.

What’s keeping the recently renamed Bally Sports RSNs so far in the red? Aside from the obvious, the Diamond Sports Group, which operates the RSNs within Sinclair, had to pony up a ton of cash to keep the broadcasting rights for the Milwaukee Brewers and Miami Marlins ($85 million altogether) on top of what they paid to keep the Kansas City Royals’ rights last summer ($50 million/year). Not to mention all the rights fees they are committed to across all their local networks. Meanwhile, the RSNs have all been noticeably absent from Dish Network, YouTube TV, Hulu, and FuboTV, robbing them of the much-needed audience and revenue opportunities.

Sinclair paid $9.6 billion for the networks, which was considered a bargain compared to the expected $20 billion price tag. Still, while COVID-19 certainly pushed back any potential positive momentum the networks might have in regaining a foothold in the market, the numbers seem to imply that the road to recovery could be a lot bumpier than expected if it’s passable at all.

“I used to say that the RSN model is good for five to 10 years, but I have to modify that,” a sports net programming chief told Crupi. “COVID will have a more lasting impact on sports than perhaps we’d anticipated. The RSNs are not in a great spot right now—along with the battle with distributors, the advertisers are not clamoring back.”

“The impact of the last 14 months has been profound, but let’s face it, the next six to 12 months may be too much to come back from.”

The saving grace for the RSNs could be, what else, gambling. With a casino owning the naming rights and the ever-expanding sports-betting market across the nation, it’s possible that there could be opportunities there that make up for some of the shortfalls. But will that be enough to make the endeavor profitable?

To be fair, this doesn’t seem to be an issue for some regional sports networks. YES Network seems to be weathering the storm, with expectations to raise their average monthly subscription fee to $7.27 per household, up 12% from 2019. But then again, that’s because they have the New York Yankees. It helps to have the rights to one of the most marketable sports franchises in America.