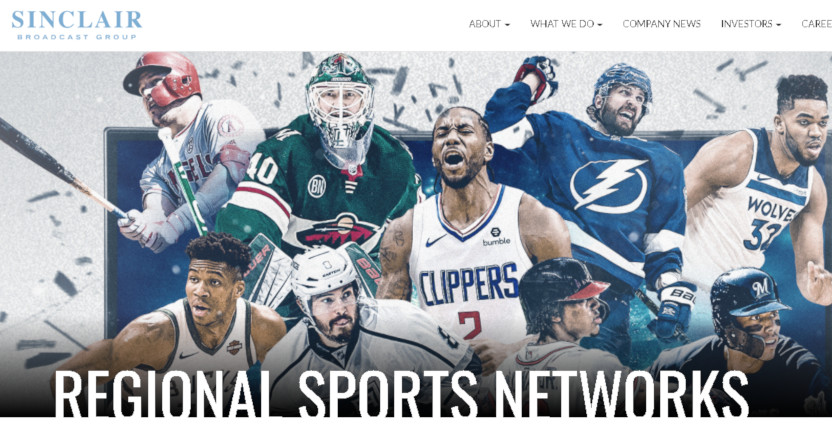 When Sinclair bought the former Fox regional sports networks from Disney (last May, with that purchase approved by the Justice Department last August) for $9.6 billion (at a total valuation of $10.6 billion, including minority shares they didn’t buy out), that deal looked pretty good for them on several fronts. After all, those networks (including YES, which wound up being sold separately for around $4 billion) were estimated as worth $20-22 billion at the start of Disney’s auction of them; even subtracting YES, that would put the other RSNs at a estimated value of at least $16 billion.

But things have gone especially poorly for Sinclair and the RSNs since that takeover, particularly (but not exclusively) with this year’s COVID-19 sports shutdowns. And a lot of pay-TV providers have recently dropped the RSNs. And now, bondholders (an important group, considering that only $1.4 billion of the purchase price was in cash, with $4.9 billion coming in bonds, $3.3 billion coming in a loan, and $1 billion coming in shares) are reportedly pushing for a debt restructuring at Diamond Sports (the Sinclair subsidiary set up to oversee the RSNs), as Jess Barnes wrote at Cord Cutters News Wednesday:

It’s been just over a year since Sinclair Broadcast Group purchased 21 Fox regional sports networks through its subsidiary Diamond Sports Group for $9.6 billion. The company is now reportedly looking into restructuring, with an analyst calling the RSNs “Sinclair’s Achilles’ heel.” The company and its creditors have each brought in advisers to assist with restructuring talks.

Here’s more on the specifics of those advisors, from a Wall Street Journal piece last week fromAlexander Gladstone and Lillian Rizzo:

Diamond Sports Group LLC’s bondholders have hired legal and financial advisers as the Sinclair subsidiary deals with the dearth of live sports during the coronavirus pandemic and the loss of some carriage deals with pay-TV distributors, people familiar with the matter said.

The unit’s debt stems from a big bet on regional sports that Sinclair made last year when it bought 21 networks from Walt Disney Co. , an acquisition valued at $10.6 billion and financed through one of the largest U.S. junk-bond sales in years.

Mike Farrell covered this at Next TV last week, and that’s where that “Achilles’ heel” line comes from:

In a research note, Wells Fargo Securities media analyst Steven Cahall said bondholders will have to consider whether to keep Sinclair as the operating partner for the RSNs — a service for which they take about $100 million in EBITDA annually — or go with another partner. The analyst prefers a Sinclair exit.

“We think the RSNs have been Sinclair’s Achilles heel as it’s a distraction for investors, an asset in decline and a potential drain on retrans to support RSN carriage fees,” Cahall wrote. “While there’s no equity value in Diamond these factors also mean less equity value in TV. Ultimately we view a separation of the RSNs as the best case scenario for Sinclair as it removes a big overhang that’s needed management’s attention since the get go.

Separation may be a rather extreme outcome, though, and there isn’t a lot to suggest that’s being seriously considered at this point. Sinclair clearly sees value in the RSNs and synergy with their local broadcast stations, and there isn’t necessarily another obvious operator to point to (especially considering that this all started with Disney’s attempts to run these RSNs nixed by the Justice Department).

And it’s worth noting that the RSNs’ poor 2020 performance has a whole lot to do with an unanticipated sports shutdown/season-shortening. As we’ve written before, while that shutdown and subsequent season shift had all sorts of negative effects on broadcasters and pay-TV providers, the RSNs had it the worst thanks to the details of their contracts. Those contracts left them owing more to providers in payments for missing guaranteed numbers of games than they received back from teams for those missed games. And the RSNs are also even more dependent on live games than the national cable sports channels, so the dramatic changes to their lineup hit them even harder than, say, ESPN or FS1.

But, at the same time, while these RSNs would certainly be doing better in “normal” times, there isn’t a clear return to normalcy immediately ahead. The details of the 2020-21 NBA and NHL seasons are still being worked out, but they’re certainly going to be shorter than they would be in a standard year. The 2021 MLB season may wind up going ahead in a more normal fashion, given that it’s not set to start until April 1, but it may wind up seeing some changes and contractions as well if there isn’t yet a widely-available COVID-19 vaccine by that point. And so while 2021 will probably be “better” for the RSNs (in terms of live game inventory, which is the most important thing for them), it also probably won’t be a full return to “normal.” (And given how so many sports have seen ratings declines this fall, there isn’t certainty that “normal” ratings will ever return even after a vaccine.)

It should be mentioned that a lot of the RSNs’ current carriage woes are about the pandemic-created offseason lull, though. Sure, it’s bad for these RSNs that they’ve been recently dropped by YouTube TV and Hulu+ Live TV (and they were previously dropped by fuboTV and Dish/Sling TV). But the YouTube and Hulu drops came this month and last month, at a time when these networks had next to no live games. Many of these networks would normally have NHL and NBA games at this point, but those aren’t coming back until at least December now, so there’s not a lot of urgency for these providers to bring back the RSNs just for their offseason studio content.

And the key driver for these networks is really baseball in most cases, so there may not be a ton of movement until we get closer to April 1. The real long-term carriage concern is if these networks remain off these providers after April 1. And it should be noted that the streaming providers aren’t the entire story; these RSNs do have deals with many traditional cable and satellite providers, and many of those are locked in until at least 2022.

At any rate, this is an interesting conjunction of circumstances for the RSNs and for Sinclair’s purchase of them. The opportunity to pick up these RSNs for an expenditure of $9.6 billion looked pretty good last year, and that led to Sinclair leveraging their assets so heavily to get that deal done. And that deal led to an initial jump for their stock. But that leveraged buy now looks a lot worse thanks to the pandemic’s effects on sports and on these RSNs, and it’s definitely notable to hear that the bondholders are getting antsy and that some restructuring may be on the table. It’s unclear exactly what that will mean for the RSNs at this point, but this is definitely a story worth keeping an eye on in the weeks and months ahead.