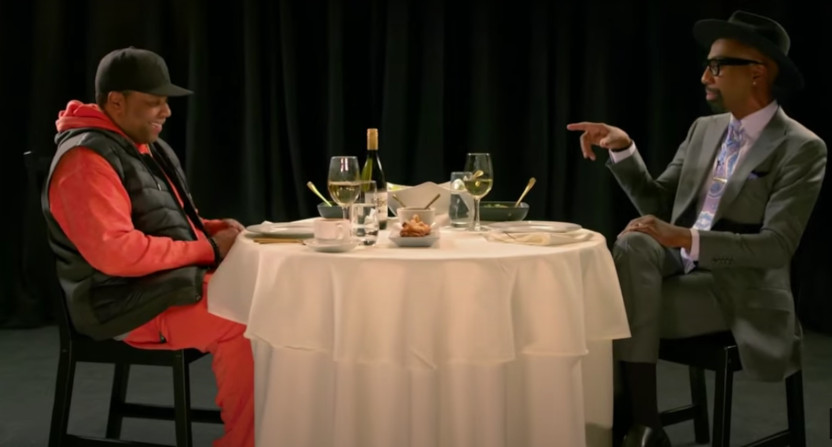 The latest interesting piece of gambling-associated content comes from MSG Networks. They announced Friday that they’re launching a new “One Course with JB Smoove” dinner interview show, hosted by actor and Caesars’ spokesman JB Smoove. The first episode Friday saw Smoove talking to famed actor Kenan Thompson (as seen in the screengrab above), and the next one Sunday will see him talk to New York Giants’ quarterback-turned-ESPN alternate broadcast star Eli Manning. Here’s more from Friday’s release from MSG:

The show will feature Smoove sitting down for a meal with a special lineup of dinner guests, which include a mix of acclaimed athletes, actors, comedians and musicians. Smoove, best known for his role as Leon Black on ‘Curb Your Enthusiasm,’ will engage in entertaining and unfiltered conversations with his guests on everything from sports, acting, comedy and more, with each guest sharing unique insight and personal stories from their careers and life in New York City.

“Watch me on ‘One Course with JB Smoove’ as I indulge in my two favorite things – eating, talking and laughing,” said JB Smoove. “Wait that’s three!”

…“One Course with JB Smoove provides us another opportunity to entertain and story-tell,” said Sharon Otterman, chief marketing officer of Caesars Digital. “When we partnered with MSG Networks, our goal was to create compelling content to entertain and delight sports bettors across New York state. We always knew that having JB Smoove (aka “Caesar”), an incredible guest list and a talented production team come together would create engaging content to captivate New Yorkers.”

This is interesting on a few levels. For one, it’s Caesars taking their marketing campaign with Smoove from ads (including a Super Bowl one) to content. And there’s some logic to that; Smoove has long been a notable comedy figure, with work in everything from Curb Your Enthusiasm to Bent (which deserves much more love) to Harley Quinn. The idea of him interviewing sports figures is certainly interesting. And this might lead to more regional sports networks doing something along these lines; there absolutely could be room for some more original interview content on RSNs, and perhaps gambling deals are a way to get there. We’ll see how this series turns out, but it’s definitely notable that it’s happening. Here’s some of the Thompson discussion from Friday:

There’s certainly some potential here. And there’s an interesting list of upcoming guests, including Tracy Morgan (March 2), CC Sabathia (March 6), and Tina Fey (March 28). We’ll see how this particular partnership is received, and if it leads to other ones in the years ahead.