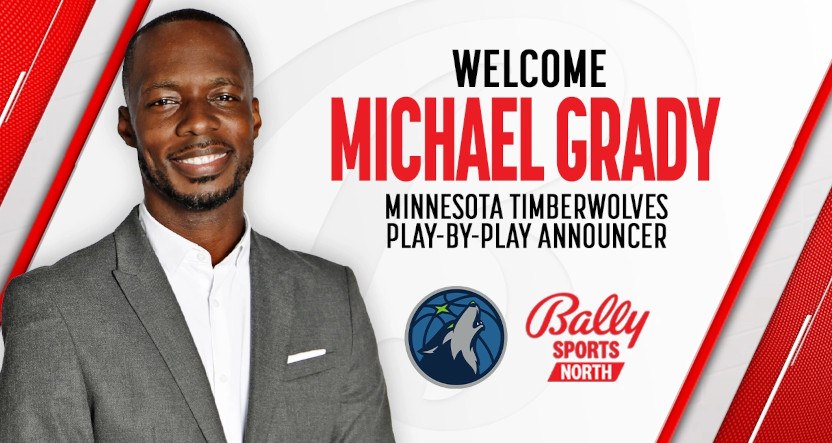 Bally Sports North has a new TV play-by-play voice for their Minnesota Timberwolves broadcasts. In May, the regional sports network announced that Dave Benz would not be returning after 10 seasons calling Timberwolves’ games, with that move coming after they elected not to pick up his contract option. They’ve now named their replacement, Michael Grady:

Michael Grady has been named our TV play-by-play announcer with @BallySportsNOR!

Grady is an Indianapolis native, and was named the 2016 Indiana Sportscaster of the Year for his work at WRTV-TV (the Indianapolis ABC affiliate); he also won a local Emmy there for coverage of the 2016 Indianapolis 500. He co-hosted a local radio show on Indianapolis’ 107.5 The Fan, and he’s long worked in the NBA as well, serving as the Indiana Pacers’ PA announcer from 2010-17. Ahead of the 2017-18 NBA season, he went to YES Network, serving as a sideline reporter on Brooklyn Nets’ broadcasts (a role that earned him another Emmy in 2019), a play-by-play voice for the WNBA’s New York Liberty, and a fill-in host on YES’ various Yankees’ coverage. He’s worked nationally as well, calling college football and basketball play-by-play for CBS Sports (and working on NFL sidelines for them) and also working as a play-by-play voice for Turner Sports, especially on NBA TV. Here’s more on him from a Bally Sports North piece by Seth Ribnick:

“Today is a thrilling day for myself and my family, this has been a lifelong dream to be an NBA play-byplay announcer,” said Grady. “I can’t wait to join [analyst] Jim [Petersen] and the rest of the Bally Sports North crew calling games for this exciting franchise.”

Born and raised on the east side of Indianapolis, Grady received his Radio Marketing Certification from Vincennes University in 2003. He has worked on behalf of the American Diabetes Association, Gleaners Food Bank of Indiana and served on the board of the Arts Council of Indianapolis.

“Michael’s unique background and basketball acumen will serve him well in his new role. Fans will enjoy his smooth delivery for this exciting new era of Timberwolves basketball and he will be a great complement to longtime Timberwolves analyst Jim Petersen,” said Tony Tortorici, Executive Producer, Bally Sports North.

The Timberwolves’ preseason schedule begins on Oct. 4 with a game against the Miami Heat. That comes after Bally’s planned Sept. 26 all-markets launch of Bally Sports +, which will make Bally Sports North available over-the-top to consumers in the network footprint.

We’ll see how Grady does in this new role. He certainly has a wide variety of past experience, including lots in the NBA. But replacing someone who’s held a particular local play-by-play job for a decade isn’t easy.