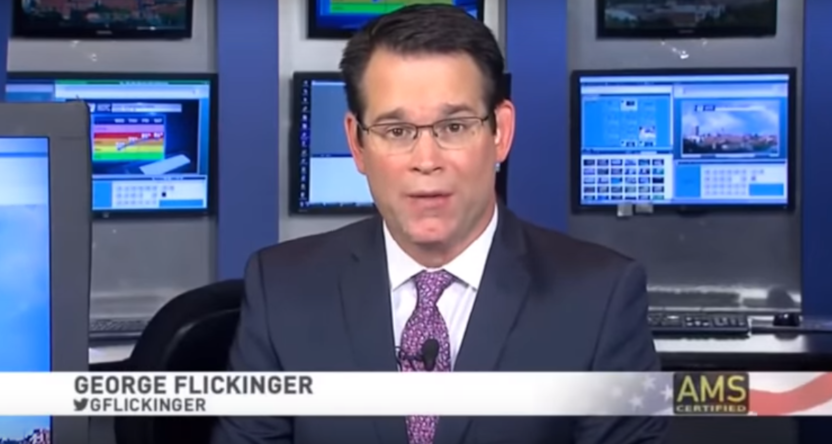 Local broadcast TV stations often break into network programming for severe weather warnings or updates, but that can annoy a significant percentage of viewers, especially if it disrupts a sports broadcast. Consider the flak Atlanta’s CBS 46 received last month for double-boxing Tiger Woods’ Masters win with meteorologist Ella Dorsey’s coverage of a tornado warning, or Michael Wilbon getting mad at DC-area WUSA’s Topper Shutt for interrupting a Masters replay with a tornado warning. The latest example comes from Lynchburg, Virginia ABC affiliate WSET, where an undated video emerged on YouTube Wednesday of station chief meteorologist George Flickinger playing angry phone calls from people upset the station double-boxed the end of Game 7 of the Blazers-Nuggets series (which took place May 12) and defending his decision to go on air with a lengthy (over 20 minute) tornado warning, reducing the NBA game to a split screen:

This starts with Flickinger explaining the station policy and how his actions followed it. “This weekend during Game 7 of the NBA semifinals here on ABC 13, we had a tornado warning in our area. It’s our commitment to you that when we do have a tornado warning, we go on the air and stay on until it is over and you are safe. This weekend, per our severe weather policy, we broke into programming with the tornado warning and allowed you to continue watching Game 7 on a split screen. But apparently, that upset some of you.”

Flickinger then plays angry voicemails, including “And I’d just like to say, I thank you for absolutely ruining Game 7 of Denver versus Portland because you have to show a [bleeped] tornado warning for over half an hour,” and “We get it, there’s a tornado, it’s been on the TV for over 20 minutes and I’m trying to watch the last three minutes, not on the B.S. split screen. This is B.S., you guys are terrible at your jobs.” And he then says “Tonight, we are not going to apologize for what we did. If you’re watching this from Bedford, for example, you’re just as important to us as someone watching from Danville or Lynchburg. Whenever there’s a tornado warning, lives are at risk.”

Flickinger then shows photos of past local tornado damage and describes them, and concludes with a wrap-up. “Thankfully, no lives were lost, and that’s why we go on TV and stay on over programming and commercials. You never know when someone new is tuning in and looking for critical information to protect themselves and their families. We take this responsibility very seriously, and if we had a chance to do it all over again, we would. Thank you for watching ABC 13, especially during severe weather.”

Sentiment in both the YouTube comments and the Reddit thread on this is running heavily in favor of Flickinger’s actions, complete with a lot of people making fun of the callers who complained and saying that sports aren’t as important as the tornado warnings. And two confirmed tornadoes did hit Virginia May 12, although damage was reportedly limited to a couple of structures. But it’s notable that different local stations treat severe weather warnings differently, with some choosing only to use a crawl at certain stages of the warning and others going to the double-box or replacing existing programming altogether.

It’s not always “go on and stay on” whenever there’s a weather warning, and the programming being replaced does sometimes matter too. For example, in the aftermath of Wilbon’s criticisms, WUSA chief meteorologist Topper Shutt said that they likely would have used just the crawl if the Masters’ programming in question was live rather than a replay:

“I will say this, had the Masters been live, we would have likely addressed it with a crawl across the screen. But it wasn’t live and happening in our viewing area, we went live and the policy is to stay live until the warning expires or is cancelled and it was canceled two minutes after it expired.”

It’s also interesting that Flickinger’s at the center of this, as he reportedly previously lost another job (at Tulsa Fox affiliate KOKI) in 2005 for breaking into NFL programming with a wildfire alert. Here’s more on what happened there from Rita Sherrow’s January 2006 Tulsa World writeup:

Flickinger interrupted a Seattle Seahawks vs. New York Giants game on Nov. 27 after receiving a request for evacuation from the Mayes County Emergency Management office.

Station officials called the weatherman’s failure to wait for a commercial a “negligent” decision, and he was fired without pay.

Flickinger confirmed the firing in an e-mail, but declined to go on the record with the Tulsa World.

That piece does mention that the World previously reported in October 2005, before the incident in question, that Flickinger was leaving the station at the end of his contract in January. So the “firing” there comes with some context, especially considering that Flickinger didn’t provide his side of it to the paper. But in that case at least, station officials appeared to conclude that a full and immediate weather interruption wasn’t justified. That doesn’t look like it’s the case this time around, with Flickinger’s comments in the video indicating he was following ABC 13’s severe weather policy, but it’s notable context to consider; not every station always wants its weather staff to “go on and stay on” immediately over every weather emergency.

And it’s also worth mentioning that many get their information on local weather emergencies from other sources, including other local TV stations, local newspaper accounts, internet storm tracking and more. The information provided in a weather interruption isn’t relevant to all viewers. (And even for those learning of the weather incident for the first time, not all of them will live in an affected area.) Of course, those in favor of heavy and protracted interruptions argue that making a difference to anyone is reason to err on the side of caution here. But not everyone agrees that long-running interruptions are always worth it, or that an on-screen interruption is always necessary compared to just a crawl.

Overall, the discussion here shows that many local broadcast stations are still committed to interrupting programming for severe weather alerts. The barrier to interruption varies from station to station, as does the decision on how to interrupt (crawl, doublebox, or total preemption), but it’s certainly going to happen in some cases, and many people and stations seem to be in support of that general idea. But that’s one potential drawback for sports fans of when key games wind up on broadcast TV; yes, there’s a lower barrier to entry (broadcast TV is available even to those without cable or satellite as long as they have an antenna setup, so that’s the Nielsen universe of an estimated 119.9 million U.S. TV homes versus the around 84.5 million for something like ESPN), but local broadcast affiliates will interrupt for weather and sometimes even news in a way that cable sports networks won’t. And when they do, it’s likely to lead to this same cycle of some fans yelling at them and then other people yelling at those fans.