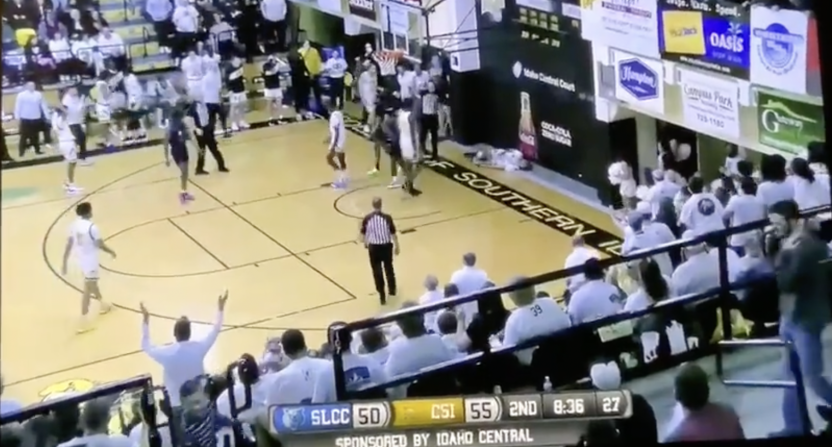 The College of Southern Idaho recently fired a play-by-play announcer who referred to Salt Lake Community College basketball players as “thugs” during a game broadcast.

The game in question took place on Wednesday. In a video4 posted to Twitter, it appears in the incident in question occurred during the 2nd half when SLCC player Jordan Brinson, who is Black,

It’s crazy how announcers can get away with saying whatever! Referring to a player as a thug because he fouled is not how the game is suppose to be called! It’s crazy that @CSIAthletics1 can get away with this.. wit no problems.. @BruinAthletics the disconnect to humanity is felt pic.twitter.com/9yvA7Y3kfG

The comments came during a Feb. 16 game between the Bruins and the Golden Eagles in Twin Falls. The announcer, identified as Jonathan Drew, yelled, “Who are these thugs!” after a play involving SLCC player Jordan Brinson, who is Black, makes contact with a CSI player who falls after attempting a shot. The announcer, whom KUTV identifies as Jonathan Drew, says that the CSI player gets “hammered again” alluding to some kind of previous contact during the game. He then rhetorically asks, “Who are these thugs?”

On Thursday, the College of Southern Idaho issued an apology and announced that the announcer’s contract had been terminated.

“The College of Southern Idaho and the CSI Athletic Department want to apologize to the Salt Lake Community College players, coaches, and fans for the comments made during the broadcast,” said Joel Bate, CSI athletic director. “CSI does not condone and will not tolerate these types of remarks. They do not reflect our values as an institution of higher education or as a member of the National Junior College Athletic Association. We have the utmost respect for the SLCC Athletic Department and for their student-athletes.”

Kevin Dustin, SLCC’s Director of Intercollegiate Athletics and Recreation, responded to the incident as well.

‘We do not believe the comment reflects the values of CSI as we’ve come to know them over the years. This is really an opportunity for all of us to become more aware and mindful of the words we use to describe others, which can potentially be inappropriate and insensitive,’ said Dustin in a statement.

“SLCC and CSI have a long history of competing together as members of the Scenic West Athletic Conference in the National Junior College Athletic Association, and the institutions have long shared a mutual respect. Both SLCC and CSI view this incident as a learning opportunity and view the matter as closed.”

According to a CSI website post from 2011, Drew has been their radio broadcaster since at least then. A 2012 news item also noted that Drew was sports director and afternoon host for the local ESPN affiliate.

The incident is reminiscent of a similar instance involving an Arkansas high school football game and an announcer referring to a Black player as “thug trash” after a big hit.

While some might push back on the notion that calling a player a “thug” is a fireable offense, it’s important to note that context matters when it comes to its usage. The term “thug” has long been associated to describe Black people negatively, especially in the context of Black athletes. John Beilein caused a firestorm a few years back when he referred to Cavaliers players as thugs. When asked his feelings about being called a thug, Richard Sherman said that it’s the “accepted way of calling somebody the N-word now.”