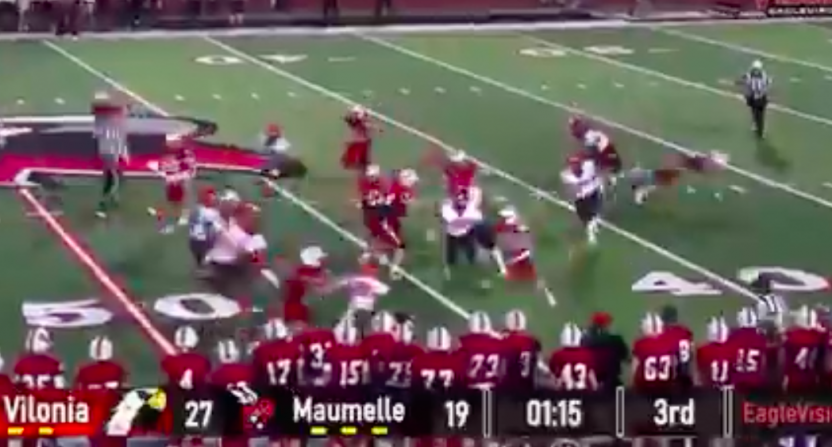 High school football games are happening all across the country but a recent game between two Arkansas high schools is drawing scrutiny and outrage following comments about a student made by a commentator.

This past weekend, Maumelle and Vilonia high schools were playing one another when Maumelle senior Nico Davillier, who is committed to playing for the Razorbacks, put a hard hit on the Vilonia quarterback. That’s when EagleVision commentator Corey Eary got animated, called for Davillier to be thrown out of the game, and referred to him as a “thug trash player.”

NEVER IS THIS ACCEPTABLE. @coreyeary and his crew should be removed from any @ArkActAssn sanctioned broadcasts and an apology issued to @DavillierNico and the Maumelle coaches and fans. Racism should never be tolerated. Your move AAA. @RRainwater1037 @VtownAthletics1 @sully7777 pic.twitter.com/WNCJFkVtKx

“They need to throw him out of the game,” said Eary. “Nico is a thug trash player. I am sorry, I’m gonna call it the way that it is. He continues to hit late and give extra stuff that is terrible.”

Davillier was indeed called off the field for a penalty. However, as word of the description and comments spread amongst both schools, it became clear that some kind of reaction was required.

The term “thug” has long been associated to describe Black people negatively, especially in the context of Black athletes. John Beilein caused a firestorm a few years back when he referred to Cavaliers players as thugs. When asked his feelings about being called a thug, Richard Sherman said that it’s the “accepted way of calling somebody the N-word now.”

Meanwhile, Maumelle head coach Kirk Horton told KARK Fox 16 that Ealy’s comments were “unfortunate” and said that Davillier was a good kid and an excellent player. He also said that has not heard from Eary or been offered an apology.

Eary sent a statement to KARK regarding the comments, saying that he had “made efforts to reach out to the family” but had not received a response.

“I am a volunteer commentator and one of the co-founders of our EagleVision broadcast team. We operate independently of the school to bring sports contests to our fans. During the live stream broadcast of our game Friday night with Maumelle, I made some unnecessary and inappropriate comments towards one of the Maumelle players. I will make no excuses about what I said nor will I try to defend my comments. It was wrong. I got caught up in the moment of a highly contested game and made statements on certain plays that I should have let the referees handle on the field. I have made efforts to reach out to the family to offer an apology; however, I have received no response to my attempts so far. I want to extend a sincere apology to Nico Davillier and his family. I’m sure that he is a great young man and my comments were never about him as an individual. I wish nothing but the best in the remainder of his season with the Maumelle hornets and his future as an Arkansas Razorback. Thank you. Corey Eary.”

On its Facebook page, EagleVision describes itself as “the broadcasting team for the Vilonia High School.” They appear to post all game broadcasts on their YouTube channel, although it appears that this specific football game was not added or was posted but removed.

The whole incident brings to mind a similar one from earlier this year when an announcer in Oklahoma used a racial slur to describe high school basketball players taking a knee during the national anthem. The announcer, who also owned the privately-owned streaming platform that called the games, tried to blame his “sugar spiking” for the comments. The relationship between private broadcasters and high schools means that lack of standards and controls can lead to these kinds of events that, short of public outrage, often don’t see the light of day.

As for whether or not anything will happen to EagleVision or Ealy, there’s no word of any official punishment or changes. In the meantime, it certainly hasn’t stopped people from expressing their frustrations and anger on social media.

Calling a kid a “thug trash player” isn’t cool. You can’t be saying crap like this on the air, and you shouldn’t be saying it at all. https://t.co/1JDkYffBCK

Wow! They really say thug trash player? Guess they don’t remember what happen when Don Imus used that word to describe Rutgers women’s basketball players. There’s no place for that anywhere or any circumstances. https://t.co/kSHE1cwPKw