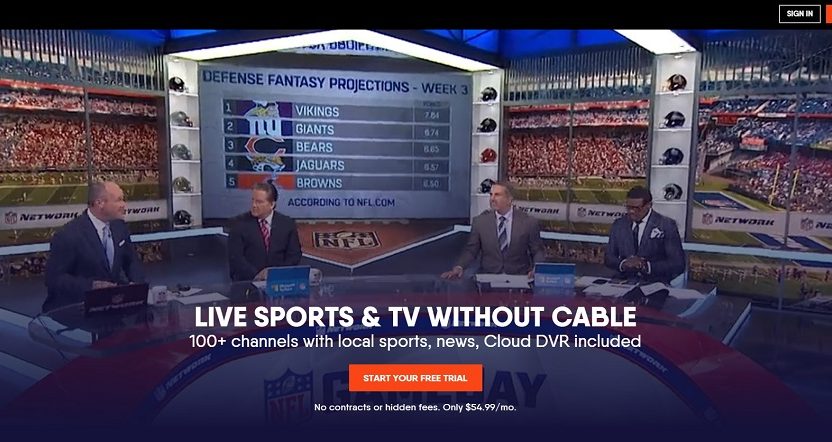 fuboTV has become a bit less appealing as a streaming option for sports fans. On Wednesday, the company announced they had dropped the Sinclair-owned Fox RSNs, claiming the rates were “not consistent with fuboTV’s mission to provide value and keep costs low to consumers”.Here’s the full statement from fubo, via Cord Cutters News.

In May 2019, Fox divested its regional sports networks (RSNs), which were ultimately purchased by Sinclair Broadcast Group. Standalone rates for these RSNs are not consistent with fuboTV’s mission to provide value and keep costs low to consumers. As of January 1, 2020, these networks have left fuboTV, like they have with other virtual MVPDs. Despite these changes, fuboTV continues to be a sports-focused cable TV replacement with home team coverage in top markets. fuboTV’s carriage of regional sports networks includes full coverage in Chicago, Philadelphia, the San Francisco Bay area and Boston, significant coverage in New York, and we are the only vMVPD with home team coverage in Houston. Additionally, our base package features more than 40 channels that carry sports and over 700 local broadcast stations. We’re also the only vMVPD streaming live sports, including Super Bowl LIV, in 4K. fuboTV remains the best live TV streaming service to follow your home team throughout the season

In addition, fubo dropped Disney-owned FX, FXX, FXM, and National Geographic, which have little value for sports fans, but are relevant to others. This makes sense for fubo, given that they don’t carry ABC, ESPN, or any other Disney-owned networks. On Reddit, a fubo employee rationalized that decision based on the cost of the full Disney bundle, which would be passed on to subscribers.fubo is not the first streaming service to drop the Fox RSNs in recent months. Back in July, Sling TV and Dish (which owns Sling) dropped the RSNs. Those networks have yet to return to either lineup, and it doesn’t appear they will be doing so in the near future. The Fox RSNs are still available on AT&T TV Now (formerly DirecTV Now), Hulu Live, and YouTube TV, and it’s worth keeping an eye on those services to see if they eventually follow the path of Sling and fubo.As for fubo, they find themselves in a tough position right now. It’s hard to bill yourself as a destination for live sports when your service doesn’t have any ESPN-owned networks (including ACC Network and SEC Network) or the Fox RSNs. Yes, they have AT&T SportsNet Southwest, the NBC Sports RSNs, and all of the non-ESPN national sports cable networks (aside from MLB Network and NHL Network), but not having the ESPN networks *and* the Fox RSNs could be too much of a bitter pill to swallow for some fans.UPDATE: the Sinclair RSNs also provided a statement to Awful Announcing.

“We’re disappointed that FuboTV has dropped our 22 regional sports networks. Fubo positions itself as a sports-first service, yet it has chosen not to carry our RSNs, ESPN or ABC. In addition, Fubo has dropped FOX-affiliated television stations in nearly 40 markets, FX and National Geographic Channel. We offered FuboTV terms consistent with those agreed to by the many other providers that carry our RSNs – including other OTT providers such as YouTube TV, Hulu + Live TV and AT&T TV Now. FuboTV customers should switch providers today to watch their favorite teams’ games and many other popular sports and entertainment programs.”