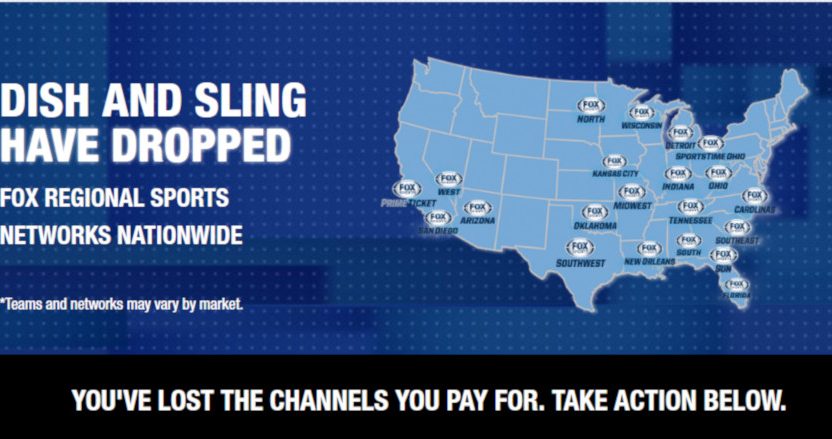 The posturing is continuing in the RSN carriage fight between Dish and the former Fox RSNs, which are soon to be transferred to Sinclair. Those regional sports networks were pulled off Dish Friday, following a temporary extension that didn’t last long, and Dish chairman Charlie Ergen now seems rather resigned to the idea of not carrying those networks at all. Here’s what Ergen said on Dish’s second-quarter earnings call, as per Anthony Crupi of Ad Age:

Speaking on the satellite company’s second-quarter earnings call, Dish Network Chairman Charlie Ergen suggested that the blackout of the 21 RSNs and YES Network, which began on Friday afternoon, could extend indefinitely. “It doesn’t look good that the regional sports will ever be on Dish again,” Ergen said, noting that the high cost of carrying the channels may justify dropping them altogether.

“The frustrating thing is, they are not very good economic deals for us,” Ergen said. “We have real data that tells us that the channels are overpriced, and Fox had a lot of leverage to get people to overpay when they owned them.”

Of course, it’s far from clear that Fox had more leverage than Sinclair (which owns a whole lot of local networks) does, and that’s not even much of a discussion at the moment given that Sinclair hasn’t yet officially acquired the RSNs (there are still plenty of layers of governmental approval ahead). But it’s interesting to hear Ergen seem so against the possibility of carrying these RSNs. It is notable that he later caveats that a bit, saying “Because I’m emotionally involved, I want to keep them. But my nose tells me, that’s not the right thing to do,” but there’s still a notable anti-RSN sentiment at Dish and Sling TV, with Sling TV Group President Warren Schlichting telling investors he doesn’t want the RSNs:

“The model is broken. The RSNs are just not a good deal. So, the recommendation is actually to leave those RSNs off the service long-term.”

It will be interesting to see if there winds up being a deal here or not. There are plenty of previous cases where aggressive posturing didn’t keep the sides from eventually coming together, but it is notable to see how critical Dish and Sling executives are being of any sort of RSN deal. And while some previous disputes made it easy to say “If you care about having sports channels, don’t get Dish” (given their long history of carriage fights), that’s not as much the case any more, especially in an era where even the likes of AT&T are fighting with local stations. Sports carriage disputes are spreading, and it’s not just Dish these days.

We’ll see if this one winds up leading to a deal, but it’s not clear it will. As Ergen tells Crupi “We clearly will lose some customers, but it’s a very small fraction of our customers that are avid viewers of the regional sports, primarily baseball.” If those customers do leave, and if they’re as small a part of the overall audience as Dish believes they are, this could definitely lead to no RSN carriage on Dish any time soon. And that could create a further stratification of cable/satellite deals, with those who care about local MLB/NBA/NHL teams subscribing to packages that include their RSN, and those who don’t signing up with or sticking with Dish. We’ll see how it all plays out, but it’s certainly interesting to see Dish executives be so publicly unenthusiastic about the RSNs.