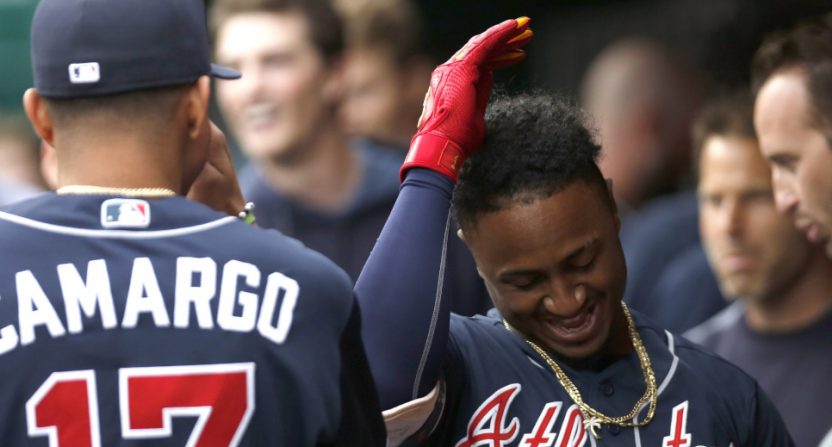 There’s been a lot of discussion out there around Atlanta Braves’ star second baseman Ozzie Albies (seen above celebrating a home run Wednesday) signing an extension for an average of $5 million per year for seven years, something dubbed everything from “insanely cheap” to “among the worst ever for a player” to ” among the most team-friendly in recent baseball history.” With the Braves facing the Cincinnati Reds Wednesday, Fox Sports Ohio Reds’ analyst Chris Welsh decided to add his two cents to the Albies conversation during the game, and he did so in a way that annoyed a lot of people.

So, here's the full comments from the Cincinnati Reds broadcast about Ozzie Albies and the deal he took. pic.twitter.com/eSYMXMk7px

“It’s funny, I’ve read a lot about it and I’ve read opinions on both sides. A lot of people are blaming the agent for letting him sign a deal like that. But Albies came from a very poor background, he’s from Curaçao, and when somebody offers you 35 million dollars—I mean, he may not know the difference between 35 million dollars and 85 million dollars. It’s going to have a tremendous positive effect on his family and himself. Maybe the people in his immediate family or extended family. It changes the lives of so many people.”

“And you don’t know what really happened behind the scenes. Did the Braves bring his family up into the office and talk to them directly? Did they only go through the agent? Did he feel pressure from one side or the other to sign this deal or not? So it’s become kind of a lightning rod of a deal in baseball right now, because a lot of people look at it on the surface and say ‘Ozzie Albies has the chance to be a superstar player and make $100 million or more in this game and this contract’s going to take him until he’s age 30. And if he’s 30 years old and the owners when he is 30 treat the free agents like they did this year, those 30-year-olds and over, he may not have a lot more money than anyone else out there looking for a job.”

“It’s a very complicated thing. I’m not very anxious to go blame the agent on that because I doubt very much that he went out and persuaded him to sign that contract that was a team-advantage contract. And then the other thing you’ve got to remember is that there are a lot of players right now who are shifting agencies, leaving one agency to get to a different agency. So the existing agent may be in a hurry to get that guy to sign a contract before he shifts and moves to a bigger agency. So there’s a lot of little things behind the scenes going on that we don’t know anything about, but that kind of money can change your life. And more power to him, he’s a pretty good ballplayer.”

A lot of that is the same sort of discussion and speculation about why Albies would sign this that’s been advanced elsewhere, but it’s the “he may not know the difference between 35 million dollars and 85 million dollars” in particular that really drew backlash. And there was a lot of that backlash:

To the Fox Sports Ohio analyst who thinks Ozzie Albies doesn’t understand the difference between $35M and $85M, these are the languages he speaks:

He probably understands it better than you do, buddy.

#Reds commentator said the following about #Braves star Ozzie Albies: "He came from a very poor background. He’s from Curaçao..and if somebody offered you $35M, I mean he might not know the difference between $35M and $85M.”

What a disgrace. Get out of the booth.

“He came from a very poor background. He’s from Curaçao..and if somebody offered you $35M, I mean he might not know the difference between $35M and $85M.” pic.twitter.com/47dkstwkya

This is some of the dumbest *@!&*@ I’ve heard…. Mr. Reds Announcer needs to go to Braves clubhouse and look Albies in the eyes and apologies https://t.co/1hANKNgp9c

“Albies isn’t smart enough to know what a good deal is” @Reds broadcasters are SCUM insulting his intelligence and love for the game and Braves organization. https://t.co/jcTos5lJ1g

This is ignorant. Bet Ozzie Albies can tell Chris Welsh where to shove it in about four different languages. https://t.co/AHgniGHmEE

A lot of what Welsh said isn’t that different from the general conversation that’s been out there about the Albies deal, and even the comment about his poor background might have not caused this much of a stir if it had been framed differently. And it’s not necessarily wrong to suggest that Albies might prefer to take a guaranteed smaller amount of money now rather than gamble that he’ll be healthy and able to cash in in free agency later, or even to point out that the money he did get here can make a difference for him and possibly his family. But “might not know the difference” seems like a pretty insulting way to say that, and it’s understandable why that drew criticism.