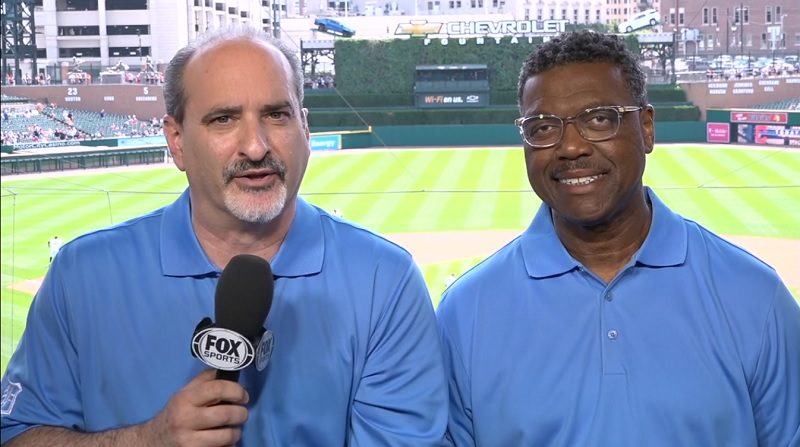 This shouldn’t be surprising to anyone that has been following this story for the last month, but Fox Sports Detroit commentators Rod Allen and Mario Impemba will not be returning to the broadcast booth for the Tigers next season. The two broadcasters haven’t been on TV since September after a physical altercation that took place following a game in Chicago.

The Detroit Free Press reports that multiple sources told them that Allen and Impemba weren’t going to be back. This stemmed from a physical altercation last month when Allen allegedly assaulted Impemba by choking him from behind, allegedly because of a chair that was in the broadcast booth. Matt Shephard and Kirk Gibson called the Tigers game the next night and continued to call games the rest of the season.

The chair situation apparently lit the fuse on the situation, and it’s definitely not a topic you would expect to cause so much chaos, via The Detroit News.

There were three chairs in the tightly packed booth, only one of which was sturdy: one Impemba had mindlessly or, perhaps carelessly, decided to occupy when it rested in his broadcast spot. Allen has had back issues and rigid seats are important. When he arrived, he expected the more supportive chair to be his.

Impemba, according to a source, said nothing but was steamed as he turned it over. Impemba’s ire was obvious and now Allen was miffed:

“Are you mad that I took this chair?” he asked, according to the source.

The duo also had a flareup earlier that day when Allen postponed an interview with outfielder Jim Adduci for no apparent reason.

There were prickly words from Impemba about an early afternoon interview between Allen and Tigers outfielder Jim Adduci that Impemba believed Allen had postponed out of convenience. Allen was furious, not only because he believed Impemba’s charge was baseless, but because he viewed the interview was none of Impemba’s concern.

Impemba also was upset over Allen’s focus on matters not directly related to the game on the field in front of them, including emails and text messages, which led to nearly a minute of dead air on the broadcast immediately before the physical interaction between them.

And, as often had been the case between two broadcasters who got on each other’s nerves, late during the game on Sept. 4 there was a 43-second blackout when Impemba, again irked by what he believed was Allen’s fixation on emails, Twitter, and texts rather than on the game, decided he would boycott the microphone as retaliation.

The extended, uncomfortable stretch of dead air signaled to viewers something was wrong. Confirmation came moments after the game, an 8-3 Tigers victory, during a spontaneous and bizarre episode outside the visitor’s TV booth.

Allen and Impemba had been calling Tigers games since 2003.

According to The Detroit News, Impemba, who was reportedly making $500,000 a year, didn’t have his contract renewed. Allen’s contract, reportedly paying him $350,000 a year, included a network option for next season, and attorneys for both Allen and Fox Sports Detroit are working on a settlement.

Everything that happened the day of September 4th contributed to the two parting ways with the network, but this feud (which rarely seemed to translate to on-air animosity) had been boiling for awhile.