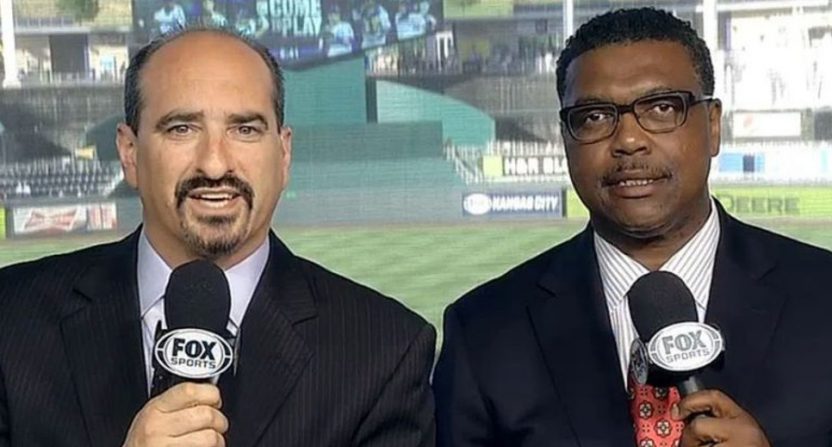 Further details have come out about the apparent “physical confrontation” involving Detroit Tigers’ Fox Sports Detroit play-by-play broadcaster Mario Impemba (seen at left above) and analyst Rod Allen (seen at right above) Tuesday after they called the Tigers game against the Chicago White Sox, and it’s not pretty. As per a piece Jason Colthorp and Derick Hutchinson penned for Detroit NBC affiliate WDIV’s ClickOnDetroit.com website Thursday evening, Allen choked Impemba from behind. (Update: This has now led to Fox Sports Detroit announcing that both announcers won’t call further games this year. Here’s more from Thursday’s Click On Detroit report.)

Sources told Local 4 that Impemba left the broadcast booth at some point and Allen followed, assaulting Impemba from behind and choking him.

The altercation was because of a disagreement over a chair in the booth, sources told Local 4.

The network, which holds the rights to air Tigers games, said it reached the decision “after speaking with all involved parties” about a reported physical altercation between the two men on Tuesday night in Chicago.

“Since this is an internal matter, we will have no further comment,” the network said in a statement.

The network left open the issue of Impemba and Allen’s status beyond this season.

The two broadcasters are employed on a contract basis by the network, not the team, but the Tigers said the organization supports FSD’s decision.

Impemba and Allen have been broadcast partners for 16 years, and it’s amazing to think that “a disagreement over a chair in the booth” could damage that, but as noted in our earlier piece on this, their ratings in our yearly announcer surveys have dropped significantly in recent years. Perhaps there’s been some growing tension that eventually led to this. But we really need more reporting on just what this “disagreement over a chair” comprised.

In any case, “assaulting Impemba from behind and choking him” is a troubling sentence, and one that makes it seem like it will be difficult to put these two back together. And an earlier report from Katie Strang of The Athletic had them sent home from Chicago separately. Now there’s this announcement that they’re both done for the year. And it seems highly unlikely they’ll be working together again next year. This might even be the end for one or both of them on Tigers’ broadcasts.