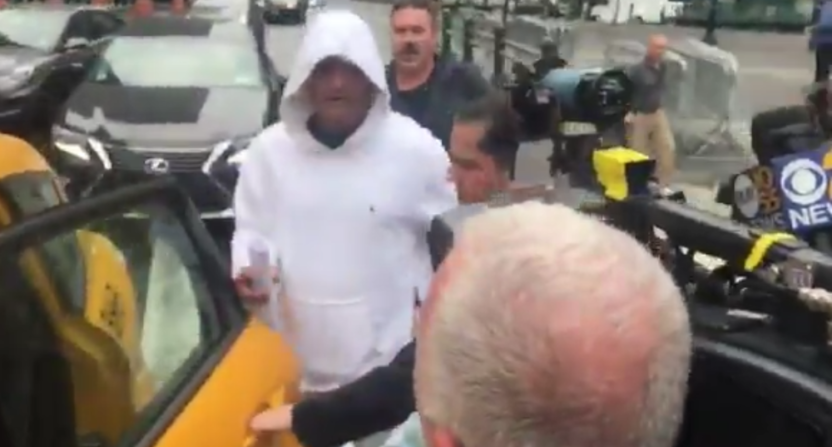 Wednesday’s arrest of WFAN host Craig Carton on fraud charges over an alleged multi-million dollar ticket-resale scam has a ton of bizarre elements. Here’s a look at some of them:

Carton is in trouble with both the FBI and the SEC. Much of the coverage of this has focused on the securities fraud, wire fraud and conspiracy charges against Carton and Michael Wright that were announced Wednesday by the FBI and federal prosecutors. Those charges are extensive, and include acting Manhattan U.S. Attorney Joon H. Kim saying Carton and Wright “deceived investors and raised millions of dollars through misrepresentation and outright lies.” That criminal case is what led to Carton’s appearance in court Wednesday. But there’s also a Securities and Exchange Commission lawsuit that was filed Wednesday against Carton and another man, Joseph Meli. Bloomberg has more on that:

On Wednesday, Carton, 48, was also sued for fraud by the Securities and Exchange Commission, which said that Carton and another man, Joseph Meli, raised more than $5 million from investors in a Ponzi scheme claiming access to tickets for resale. Meli wasn’t named in the criminal complaint filed Wednesday but is charged in a separate criminal case.

Wright listed running to Costa Rica and changing their names as an option in an e-mail to Carton. The idea of outlaws escaping to a foreign country is an old one, and even a parodied one. But Wright brought it up to Carton in a e-mail as a possible way to escape debts, as per the Department of Justice release:

In the fall of 2016, CARTON, WRIGHT, and CC-1 exchanged emails and text messages regarding their existing debts. On September 5, 2016, for example, WRIGHT emailed CARTON and CC-1, “for the sake of our conversation tomorrow,” and outlined “the debt past due and due next week.” WRIGHT listed several apparent creditors, to whom he, CC-1, and/or CARTON were personally indebted for over a million dollars. WRIGHT listed eight possible options for repaying the debt, including “Run to Costa Rica, change name, and start life all over again – may not be an option.” CARTON responded to WRIGHT and CC-1, stating “don’t forget I have $1m coming tomorrow from ticket investor[.] will need to be discussed how to handle.” On September 7, 2016, CARTON emailed WRIGHT and CC-1, referenced a potential investor (“Investor-1”) in an upcoming holiday concert tour, and suggested “borrow[ing] against projected profits” on that investment.

Wright is the COO of a strip club company: Who exactly is Carton in business with here? Well, as per Bloomberg, Wright is the chief operating officer of S Group NYC, which operates the Sapphire strip clubs in Manhattan. He was quoted in a 2011 New York Times piece on the origins of “making it rain”:

“It’s kind of a Jersey strip club thing that they would promote in order to generate more money,” said Michael Wright, the chief operating officer for Sapphire, an upscale 10,000-square-foot club near the Queensboro Bridge. A club manager “would take 50 to 100 dollars out of their own kitty to rain on the dancers, to incite other customers to loosen up their wallets.”

Of course, one can imagine what the feminist author Andrea Dworkin would have said about women being treated like tarpaulins at Yankee Stadium. Even the dancers themselves seem divided, Mr. Wright said.

“The upscale entertainer looks at it like a little bit of an insult: ‘Don’t throw money at me,’ ” he said. Everyone else? “They’ll take the money.”

Carton showed up in court wearing cargo shorts and a “Go places” t-shirt:

No word on if he wore socks with sandals. Or if “Go places” includes Costa Rica.

Craig Carton @cc660 pushed reporters and photographers out of his way as he left federal court on securities fraud charges pic.twitter.com/9ddOLt4JOj

That first photo looks like he’s walking to a boxing ring.

Mike Francesa says don’t ask questions about Carton, caller parodies Carton anyway: Francesa, the long-time WFAN afternoon host, has frequently traded insults back and forth with Boomer and Carton, prompting lots of Twitter memes about his reaction today. On the air, Francesa only said that he wouldn’t be commenting thanks to the station wanting their statement to stand alone, though, and he asked callers not to ask about Carton. Of course, one disregarded that, and even brought an on-point Carton parody:

I guess that’s one way to try and repay gambling debts. And if LaVar Ball can design and sell shoes, maybe Carton can too.

The conspirators allegedly claimed they had direct access to tickets, faked agreements to prove it, got millions as a result, and had no tickets whatsoever: From the Justice Department release:

Later in the fall of 2016, CARTON began negotiating with a hedge fund (the “Hedge Fund”) regarding a transaction in which the Hedge Fund would extend CARTON capital to finance CARTON’s purchase of event tickets, which CARTON would then re-sell at a profit. In early December 2016, CC-1 texted CARTON and WRIGHT and discussed using the Hedge Fund’s capital “to repay debts,” and not for the purchase of tickets.

The following day, the Hedge Fund and CARTON executed the revolving loan agreement (the “Revolving Loan Agreement”), under which the Hedge Fund agreed to provide CARTON with up to $10 million, for the purpose of funding investments in the purchase of tickets for events. The Revolving Loan Agreement provided, in sum and substance, that the proceeds of the loan would be used only to purchase tickets pursuant to agreements for the acquisition of tickets, including the agreements with the Concert Promotion Company and for limited business expenses. The Hedge Fund would receive a share of the profits from the resale of the tickets.

Carton’s fake company is accused of not paying rent: So, part of this may have stemmed from a lawsuit against Carton and one of the ticket-selling companies over unpaid rent, as per the New York Daily News:

A second lawsuit filed against Carton this past May accused him of skipping out on $114,116.13 in rent on a Soho business office leases under the name Advance — one of his bogus ticket-selling companies.

Carton claimed millions were wired to a “sports and entertainment company” in error, got them redirected to a different account: From the Justice Department release:

On December 20, 2016, when the Hedge Fund wired the $2 million to the Sports and Entertainment Company, CARTON contacted the Sports and Entertainment Company and told them, in sum and substance, that the wire had been sent in error and should be sent to the bank account for an entity operated by CARTON and WRIGHT, for which WRIGHT is the signatory. After the money was rewired to that account, WRIGHT wired $966,000 to WRIGHT’s personal bank account and $700,000 to the CARTON Bank Account. CARTON then wired approximately $188,000 from the CARTON Bank Account, including at least $133,000 in wires to several casinos.

Carton supposedly did this to pay off millions in gambling debts: Bloomberg’s piece has a lot of interesting notes on the gambling front:

The radio jock and the strip club operator were worried about their mounting debts in 2016. Carton said he owed about $2.5 million and a casino had frozen his account, according to the SEC.

So, around Sept. 2 of that year, the co-conspirator suggested the three get together and agree on a plan “to clean up the debt,” according to a text message cited by investigators. Wright noted in a Sept. 5 email to Carton and the co-conspirator that “Run to Costa Rica, change name, and start life all over again — may not be an option.”

Instead, the group dipped into a ticket reselling venture they had brewing, for which they already got $1 million from an investor, according to the court filings. “I would vote to bring in $$$ today to wipe out the debt that’s due and to extend it to sell tickets,” Carton emailed Wright and the co-conspirator on Sept. 7.

Doug Gottlieb defended Carton, said he has a gambling addiction: Fox Sports Radio host Doug Gottlieb had quite the take on this saga:

"I will go to my grave saying Craig Carton is a good human, but he had a seven-figure gambling debt. This is what addiction will do."

For now, Carton has been freed on a $500,000 bond backed by his New Jersey house (and not the governor’s mansion). And WFAN has confirmed he won’t be on the air Thursday; it seems highly unlikely he’ll be on their airwaves again, but that’s not official yet. We’ll see what happens next in this saga.