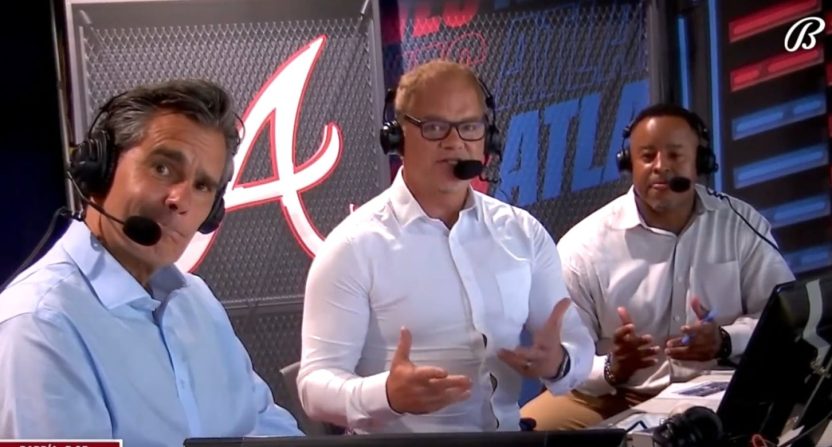 Despite strategically advertising during sports programming on TV and radio, UNTUCKit couldn’t have been too proud of the unsolicited promo they recently got from Atlanta Braves analyst Paul Byrd.

During a recent broadcast on Bally Sports Southeast, it was hard not to notice Byrd’s shirt was in danger of popping a few buttons. At the start of the broadcast, Byrd’s fit wasn’t an issue because he, along with co-analyst Brian Jordan and play-by-play voice Chip Caray, had his jacket on. But later in the game, the jackets came off. And Byrd’s shirt was on full display as the broadcast conducted an interview from the booth.

After the Bally Sports Southeast cameras gave Braves fans a good look at Byrd’s fit, the former Major League Baseball pitcher took a moment to poke some fun at himself and address why he was stuck inside of a ridiculously tight shirt.

Ain’t no way Paul Byrd can breathe in that pic.twitter.com/0EaTSt6DqB

“In broadcasting, a lot of times when you make a mistake, the rule is you don’t draw attention to it,” Byrd said with the camera focused on him. “But sometimes it’s so bad, B.J. (Brian Jordan), that you have to address it. Such is the case with my shirt that I got from UNTUCKit that B.J. told me that I only needed a large. So I got it in out of the mail, I ironed it, I put it on a hanger, I came over to the park today, and this is the result. And it’s not easy to broadcast in a straitjacket, is all I’m saying.”

The real victim here is UNTUCKit, a company that prides itself on creating shirts that have the perfect fit and undoubtedly spends a good chunk of their marketing budget on sporting events. But now they need to add a disclaimer, encouraging people to make sure the shirt fits correctly before wearing it on TV.