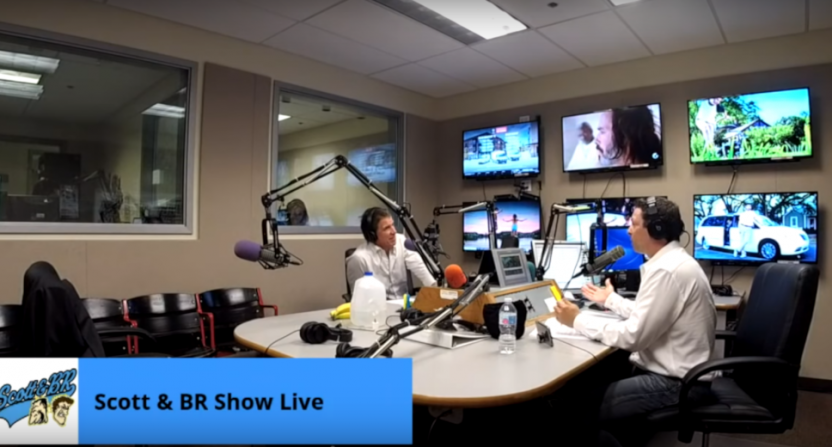 San Diego sports radio station The Mighty 1090’s sudden shutdown Monday (following weeks where it was only available as an internet stream thanks to a dispute with the owners of the tower that carried their signal) hasn’t stopped the signal for at least one show. The afternoon The Scott and BR Show with Scott Kaplan and Billy Ray Smith is set to run as usual from 3-6 p.m. Pacific (6-9 p.m. Eastern) Tuesday, but from an unusual location; Callaway Golf’s headquarters in Carlsbad. Kaplan spoke to Awful Announcing Tuesday and said Callaway reached out to provide a way for them to keep connecting with their fans.

“They have a bomb studio, and they’ve offered it to us for as long as we want. We can broadcast from there on the streams that we were using, like Twitter and YouTube, and we can keep ourselves on the air and in everybody’s face for the immediate future.”

Jeff Neubarth, the executive producer of Callaway Media Productions, told AA Tuesday they’ve worked with many of 1090’s broadcasters before, and he and Jason Finley (the company’s global director of brand management, golf ball) got the idea to reach out to Kaplan after seeing AA’s coverage of the station shutdown Monday.

“We have our own media team, Callaway Media Productions, and we do everything from commercials to internal videos to [Sirius XM PGA Tour Radio show The Fitting Room]. We have been a partner with the Mighty 1090 for a number of years, and there’s a couple guys in the office here who’ve grown up in San Diego, grown up with that station for almost 30 years. …We hosted them three separate times and they broadcast from Callaway. We have two studios here, a podcast/radio studio and more of a television studio. So when I read your article, I texted Jason last night, I said ‘Hey, we should offer them our shop to come in and kind of revive the Mighty 1090, just as a service. We’re a San Diego company since 1982. You’ve got to stick with the locals here and try to help them. …In an update to your story which kind of said they were dead, yeah, the doctor got called back in and maybe we could, you know, give them a paddle or something.”

Finley said this made sense as a way to let these 1090 hosts keep connecting with their audience until they found something new, and that it was a logical move for Callaway given what this show has meant to the market.

“It’s not necessarily that we’re bringing back the Mighty 1090, I think we’re just providing the opportunity for the hosts to continue to broadcast to their loyal audience. I grew up in San Diego as a lifelong sports fan, and I remember going all the way back to what was the Mighty 690 at the time, listening to Jim Rome get his start when I was falling asleep at night, on my clock radio by my bed. So I’m a long-time sports radio San Diego guy. And what was The Mighty 1090, which I think we all know by now is going away, has been a big part of the San Diego sports landscape.”

“And we’re a San Diego company, and we have worked really hard, Jeff and his team in particular, to build out the media capabilities that we have. When those guys came here last year, they said ‘Man, the studio is nicer than what we have.’ So we just thought it was an opportunity, just providing the the technology and the location for those guys to continue.”

Kaplan said he and Smith want to keep their show going because of the connections they’ve built with local listeners.

“On Friday night when we told people that we were going to be out at a restaurant and a bar watching a band play, not a station-sanctioned event, just ‘Hey, we’re going out, and if anybody wants to come, come hang out,’ you can’t imagine the number of people that were standing in line to get into that bar because they wanted to hang out, to dance and drink and party, and they wanted to take pictures and they wanted to tell the hosts that they loved us. Somehow, we were an important part of their lives.”

Kaplan had been with 1090 since the station’s 2003 origins, and was even the first voice on their airwaves then. He told AA he found out about the station’s troubles recently and even tried to buy it from owners Broadcast Company of the Americas, but was declined.

“I got brought into it about a month ago and I signed a nondisclosure agreement with the company, I looked through the company’s books, I got a better understanding of why the business side of the company was failing, and I then decided I was going to try and buy the radio station. The problem really with that was, it really came down to ‘Could you do a deal with the owners of the transmitter in Mexico?’, and the answer to that question is thus far ‘No.'”

“…I presented a letter of intent yesterday prior to the end of business, but it was met with rejection this morning. They had made up their minds and had been preparing for this. The CEO and his boss, who’s the attorney for the parent company, they had been preparing for this and so they came with checks prepared for people, paid people out for their vacation, and then later this week they’ll have meetings with individuals where they can discuss severance packages. I guess really the message is ‘We don’t have any money, so take it, or sue us and we have no money, so you’re never going to get anything.'”

Kaplan said fans should follow him and the show on Twitter and YouTube for now, and hopefully they’ll have more permanent plans to announce in the future.

“As for getting back on the radio, you would imagine, you know with 18 years of market equity and utilizing the airwaves for more than just our own personal gain, we’re more often than not something bigger than just a radio show, we’re part of a real community. I anticipate that there’s a lot of radio stations in this market that, when we become true free agents, will look at our show and think ‘Do we want all of that advertising dollars, do we want all of those listeners, do we want all of that social media reach, do we want all of the assets that The Scott and BR Show brings?’, my guess would be that if you’re in business to do business, fuck yeah.”

“No one will ever stop us, and I don’t mean to sound goofy. I’m just saying you make your own decisions. You have the ability to respond, so how do you respond, that’s the question. This is how we respond.”