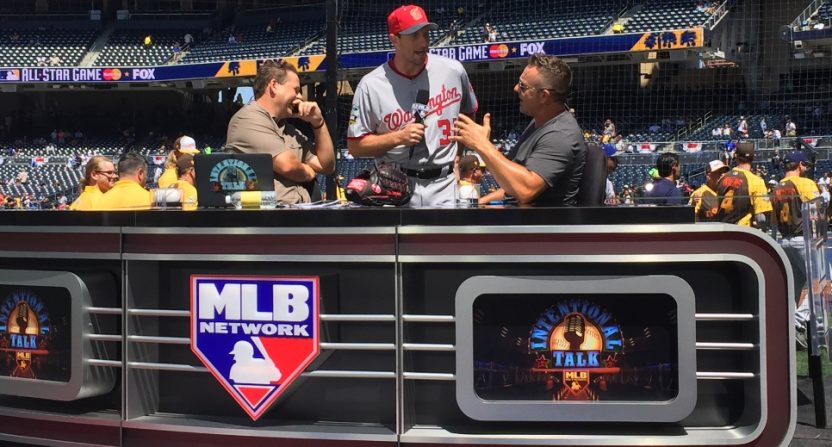 For MLB Network’s Chris Rose, this year’s All-Star Game will be particularly special. The game is going to be held at Cleveland’s Progressive Field on Tuesday, July 9, hosted by the Indians for a MLB-record sixth time. But this will be the first time that Rose, a die-hard Indians’ fan who grew up in Shaker Heights, Ohio, is going to be able to attend an All-Star Game in Cleveland. He told Awful Announcing he can’t wait for that, especially considering that he narrowly missed out on going the previous times the game was in town.

“This is the third one that Cleveland has had since I’ve been alive, and it’ll be the first one I get to go to in person. In 1981, I was away at summer camp, and I was so ticked at my parents. I was 10 years old and I was at Camp Roosevelt. I remember they saw me the day of the All-Star Game, and I begged them, I said, “Please take me to the game.’ They were like, ‘You’re at camp,’ I was like, ‘But, camp sucks! I love baseball, I want to go to the game!’ And unfortunately it didn’t happen.”

“That was the first game back from the strike. People kind of forget that, but that was our reintroduction to baseball as a country and so I wanted to go. We had missed the entire summer of baseball. And Len Barker had thrown a perfect game for the Indians in May of that year, and Bo Diaz had made the team, he was his catcher. And I was like, ‘Man, this is going to be awesome,’ and I didn’t get to go.”

“And then in ‘97 when they had the game at Jacobs Field for the first time, I was working at CNN in Atlanta and I was just one of the young anchors at the time, so I didn’t have enough seniority to get thrown a bone. So I had to work that day in Atlanta. But I loved watching Sandy Alomar Jr. become the first player to ever win the All-Star Game MVP in his home park. And then they got the game a couple years ago and I was like ‘This is awesome.’”

Rose said he’s also particularly excited to share this moment with his family.

“I’ve been able to bring my family before, but to be able to bring them [this time], I’ve got two sons that are 18 and 13, one’s going off to college this year this will be like our last big trip together. And they are huge Cleveland sports fans through and through, so this is going to be amazing. We’re actually going to do a piece where we’re going to stand out in the left-field porch during the Home Run Derby. And thankfully, my oldest son is 6’5’’, so I’m hoping that he’s going to snag something for us.”

In addition to that Home Run Derby feature, Rose will be the emcee for the celebrity softball game on Sunday, July 7, and he’ll be hosting Intentional Talk live from the ballpark on July 8 and 9. Rose said the All-Star Game (he and Millar are seen above hosting the show ahead of the 2016 All-Star Game) is the ideal venue to do this show from.

“I love doing the show every day, but it’s 10 times the energy when we take it to a stadium for just a regular game. It’s a thousand times that when you go to the All-Star Game. I think it’s the best time, actually; I would even say it’s better than the World Series only because these guys are so relaxed. They just want to have fun, they want to hop up on the set, they want to see each other, the game is secondary.”

“Do they all want to do well, do they want to put on a good show? Of course. But they want to have fun. And so guys will just pop up and have a great time with us; they’ll sing with us, they’ll do whatever, they know the gig. That’s what I love about the All-Star Game and I can’t wait to get there for it, I think it’s going to be magical.”

Intentional Talk is in its ninth year now, and Rose and Kevin Millar have been co-hosting it since the beginning. Rose said the chemistry between them is crucial to the show.

“I think it starts with our relationship. I’ve known Kevin for 16 years or so, he used to come on frequently on The Best Damn Sports Show. We realized that we were basically the same age. He used to come out here in the offseason because he grew up in L.A., his mom lives ten minutes from me. And then when he started having kids, we started hanging out.”

“Long story short, there are some people who get thrown together on a show and develop a nice chemistry and rapport and all that, and this is one of the rare instances …we’re friends, and kind of what you see when you turn on the TV is what you get, with the two of us rolling our eyes at each other. We’re like brothers, we love each other, but we’re calling each other knuckleheads and there’s kind of a baseball show floating around it. …We’re just kind of living our lives and hopefully people are still entertained.”

Intentional Talk is often known for its lighter moments (such as Joey Votto dressing up as a Mountie) and its discussions of players’ off-field interests (such as Charlie Blackmon’s fishing tips and Freddie Freeman’s dance moves). Here’s that interview with Blackmon:

Which @Rockies teammate surprised @Chuck_Nazty with his fishing skills? ? ⚾ ?

Rose said that focus on off-the-field discussions helps them show who these athletes are, and it’s something the players appreciate.

“There are no athletes that are covered more by the media than baseball players. They’ve got to talk before games, talk after games, there’s 162 of those. There’s 30-some games in spring training, there’s a month of the postseason, I mean, nobody gets pulled and tugged the way that baseball players do. And so why do you want to talk about a 3-2 slider every day? There’s a time and place for that, but let’s do a better job of peeling back the layers on these guys.”

“You always hear ‘Oh, they don’t have personality.’ That’s BS. It’s our job to create a better avenue for these guys, which I think has happened, and I certainly hope that our show has played a part. It’s called, kind of tongue-in-cheek, but it’s called ‘The Best Interview In Baseball,’ the segment that we do,and we hope that it is. Now, is it always a 10 out of 10? Of course not. Kevin’s going to butcher the English language in half of his questions. But that’s his charm, you know.”

Rose said that was particularly funny in a recent interview with Tyler Glasnow of the Tampa Bay Rays.

“Kevin asked a question, and he stopped, and he goes ‘All right, hold on…what did you ask me again?’ And I said, ‘Hey Tyler, congratulations, you made it a full seven minutes before you didn’t understand a Millar question. I think that might be a record for a first-time guest on the show.’”

Rose said humorous moments like that also speak to what Intentional Talk is trying to do in terms of showing these athletes as complete people.

“It’s our job to kind of bring out the fun side of who they are, what they like to do, to build them up as human beings. People see for three hours a day that they’re baseball players, stud athletes and all that sort of stuff. What else makes them tick, what else makes them enjoyable so that we can kind of gravitate toward them?”

“I think that we have taken on the challenge of hopefully delivering a different side of players to fans out there. And nothing makes you feel better when you’ve just completed a really good interview with maybe somebody that people didn’t know very well in the baseball world and people start responding on social media, on Twitter or something, and saying ‘I’m gonna root for that guy. I had no idea he had that type of personality. He seemed awesome.’”

“Or better yet, a guy plays for one of your rival teams and you’ve been booing the crap out of him for years and couldn’t stand him, and you’re like “Listen, I’m still going to hate his team, but that guy’s okay in my book.’ To me, we’ve succeeded in something like that.”

Rose has filled a lot of different media roles over the years, from hosting The Best Damn Sports Show Period to work on Fox’s NFL broadcasts and NFL Network. But he said Intentional Talk is particularly special for him, and a lot of that has to do with getting to do it with Millar.

“I’m very fortunate. I’ve had a lot of great jobs over the years that have had different challenges, used different muscles in the sports TV realm, but this is one where I can honestly say when I wake up every day, I’m not like ‘I gotta go to work.’ It’s pretty damn cool that I get to have fun, laugh at what we get to cover, laugh at ourselves, and deal with a guy who if I had to handpick a guy to do the show with, I don’t have to look around because he’s already there.”