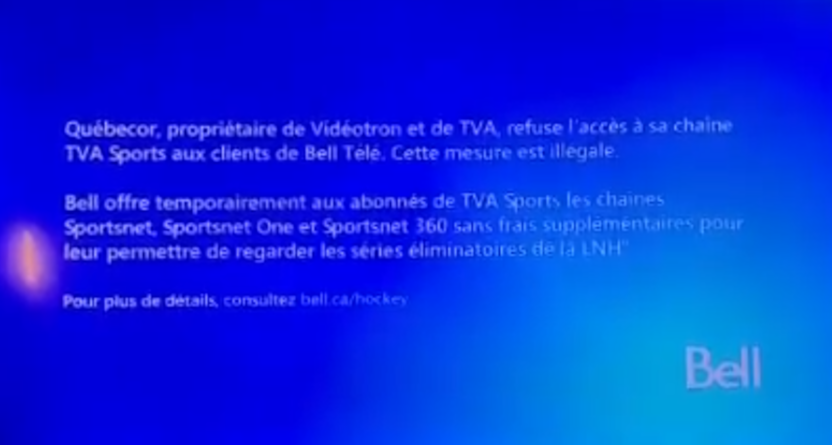 The start of the NHL playoffs has seen a particularly strange carriage dispute in the Canadian province of Quebec. On Wednesday at 7 p.m. Eastern, just ahead of the start of the first playoff game (between the Columbus Blue Jackets and the Tampa Bay Lightning), French-language TVA Sports went dark on Bell’s satellite service.

This is part of a longer dispute where TVA claims Bell doesn’t pay enough for their channel and favors its own RDS channel, while Bell claims that they pay TVA appropriately for the rights that channel has and that TVA parent Quebecor mistreats RDS on its own Videotron cable packages; Steve Faguy of The Montreal Gazette breaks that dispute down in detail on his blog. But first, here’s a look at the channel going dark:

In response to this move from Quebecor, Bell has offered its subscribers Sportsnet, Sportsnet One and Sportsnet 360 free of charge for the duration of the stoppage, so they’ll at least be able to watch the NHL playoff games in English, if not in French. But that’s really interesting about the pulling of this channel is that it happened not just at a high-leverage time (we’ve seen that before in plenty of U.S. carriage disputes), but that it happened despite a specific prohibition from the regulator involved, the Canadian Radio-television and Telecommunications Commission. Faguy has more on that in a separate post:

So can Bell or TVA unilaterally decide to remove TVA Sports from Bell TV right before the NHL playoffs as a pressure tactic against the other?

Not according to the CRTC. While Bell in theory does have the right to drop TVA Sports if it wishes, and TVA Sports in theory can similarly end its relationship, during a dispute both parties are bound by a “standstill rule” in the regulations that is specifically designed to prevent services from being cut in situations like this:

…The CRTC says it’s aware of the issue and “monitoring the situation very closely.”

In response to Bell’s emergency plea, CRTC executive director of broadcasting Scott Hutton issued a letter to both parties reiterating regulations and stating that “Commission staff is of the view that the parties are engaged in such a dispute and therefore the standstill rule applies.”

And that’s led to Bell calling these actions illegal in a variety of statements, including one issued Monday night:

Bell requested and the Canadian Radio-television and Telecommunications Commission (CRTC) today issued a directive requiring Quebecor to continue to provide TVA Sports to Bell TV and its customers.

“Quebecor’s reckless campaign and illegal actions are all about our negotiations over pricing for its TVA Sports channel and Bell’s Media’s RDS sports network,” said Martine Turcotte, Bell’s Vice Chair, Québec. “Quebecor actually wants to charge Bell more to access its TVA Sports channel than Quebecor/Videotron is willing to pay for RDS. However, the reality is that RDS is the leading French-language sports network by far, consistently outpacing TVA Sports in both content and viewership, and Bell Media will not devalue the clear fan favourite.”

In 2018, the latest period for which audience figures are available, RDS viewership was on average 67% higher than for TVA Sports.

“Bell will continue to negotiate with Quebecor in good faith as we always have and we look forward to a fair resolution. Our focus is always on delivering for the fans, and that’s why RDS is #1,” said Ms. Turcotte.

We’ll see how this one turns out, but deliberately doing what a regulator appears to have told you not to is a bold strategy, Cotton.