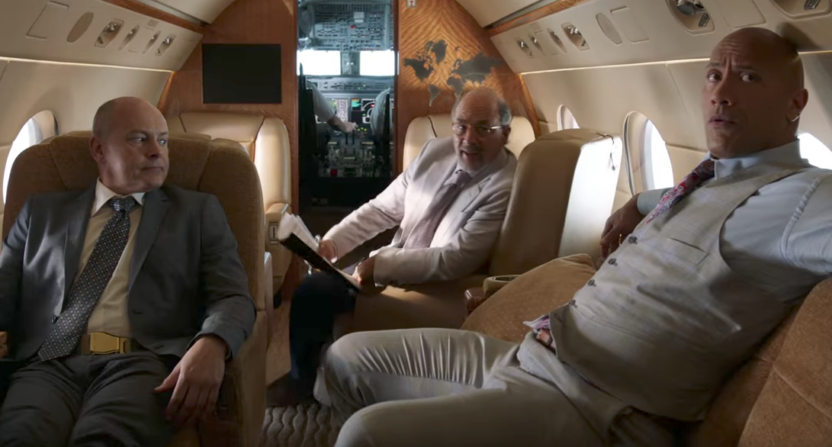 I have no idea why HBO sent me the first four episodes of Season 3 of Ballers. They’ve sent me the first two seasons early and more or less my reviews were “Well, the acting and writing is kind of ridiculous, but I mean we have The Rock, fancy cars, cocaine, yachts, topless ladies, and oh yeah football, so this is going to do quite well and will play well to the Entourage audience.”

Those ingredients, a key part of Ballers‘ DNA, are still there in its third season, as are the more glaring shortcomings of the show such as spurts of awkward dialogue, subpar acting, and ridiculous plotholes and twists (there are some real head-scratchers to start season 3). There are no real surprises here, but what is unexpected is that the writers have actually crafted some compelling storylines across the spectrum of characters.

Seasons 1 and 2, I really didn’t care about the outcome of any plot or character. It was so low-stakes for Spencer (I really just want to call him The Rock, do you all struggle with this as well?) in the first two seasons. I just didn’t care if he kept or lost his job or retained or gained a client. Same goes for the others in this loosely tied together constellation of characters. Sure, I was more invested in Ricky’s quest to find a new team and continue to mature, compared to whatever meh storylines were filling time for Charles, Joe, and Vernon.

But as we reset for Season 3, despite my snarky opinion of the show (which can be summarized as the subject matter and star power drive the show’s ratings and interest, and quality doesn’t seem to be a huge concern — similar to the food at Hooters), I surprisingly found myself enjoying the gratuitous nature of Ballers now that each character seemed to be on a story arc of much more significance and intrigue.

I’ll share some spoilers later on, but at the heart of this is Spencer’s new mission to bring a team to Las Vegas, something I’ll “spoil” because it’s in all of the promotional materials.  The transition into that storyline is pretty choppy in the first episode and like many Ballers scenes, mirrors a similar scene in Entourage in tone, dialogue, and setting.

And there are some other face-palming moments early on in Spencer’s new mission as he oddly goes into his back-pocket of tricks at a Monster Truck event to advance his new quest. I have no idea how this part of the season got into the script, other than someone said “Wouldn’t it be really badass if The Rock was driving a monster truck?” I’m guessing the writer room in unison said “Fuck yeah it would!”

But after these first few hurdles of “this is absolutely ridiculous”, it was pretty smooth sailing the next two episodes. In fact, dare I say it — it was kind of good. Like I was bummed when the fourth episode ended and I was out of episodes. It’s going to be late August before anything new happens on the show for me and I’m jonesing for a fix of Ballers and this is equally surprising, exciting, and depressing. l’m like Jerry finally admitting he watches Melrose Place.

And it’s not just Spencer who has an elevated storyline for the season. Charles and Ricky both have elevated storylines, as does Jason via a new client who seems to be a Chad OchoCinco-esque high maintenance skill player. Other perks of Season 3 include a brief medicinal marijuana plot, ESPN and NFL being painted as manipulative overbearing entities, and a much bigger dose of Christopher McDonald of Shooter McGavin fame playing an insanely thinly veiled Jerry Jones to the point where I thought they’d just call him Jerry at several points, entirely forgetting he can’t actually explicitly be Jerry Jones.

(This is probably the only time I can fit this into an article, but two years ago I flew back from a bachelor party and Jack Del Rio was on our flight and my friend said “Holy shit! Look over there. That’s Shooter McGavin!”)

Without giving away too much, I’d say the NFL and specifically Jerry Jones are not going to be thrilled with this season as Ballers begins to drift into more substantive topics that historically has got networks in trouble with the league.  Ultimately, I’m resigned to the fact I’m watching Ballers no matter what and many of you are the same way given the subject matter. While some like to “hate-watch” certain programs, I’m appreciative the show has elevated the significance of its characters and their various narratives.  And don’t worry: the cars, drugs, women, celebrity cameos and so on are still there, so this season is pretty much an upgrade regardless of why you tune in.

Other notes from the first four episodes of Ballers, Season 3 [SPOILERS]:

** There is an odd scene where Mark Schlereth meets Spencer as a go-between with him and ESPN — except Schlereth recently left ESPN.

** Through four episodes, no sighting of Andre Allen or recently drafted Travis.

** If gawking at The Rock, he’s got a) a bit of a sex scene and… b) a FaceTiming wack-off session.

** Steve Guttenberg has a pretty sizable role as a billionaire casino owner, but didn’t really do much for me.

** Peter Berg’s role has increased a good deal, as his power struggle with the Dolphins front office seems to be a core plot for Season 3.