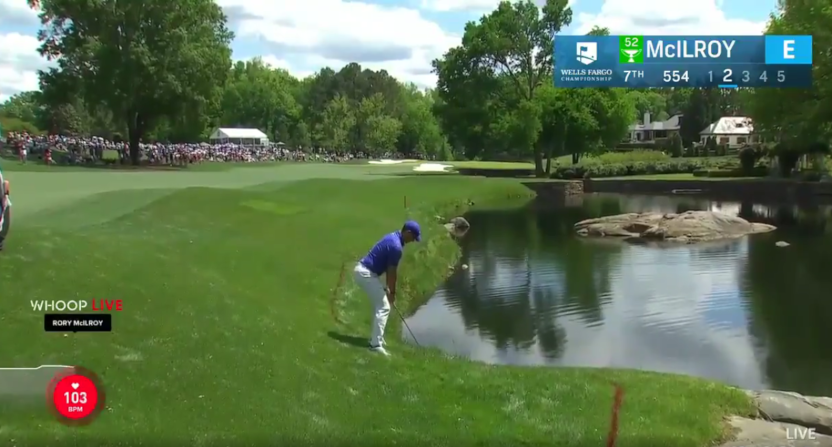 Wearable fitness-tracking technology in various forms has been making its way into pro sports in the past few years, from MLB-approved heart monitors and elbow sleeves to English Premier League electronic performance and tracking systems to NBA smart rings to monitor potential COVID-19 symptoms. But much of the information from this wearable tech has been meant only for players and team staffers; while broadcasts have also improved their usage of stats for individual players, as with “distance covered” for soccer or “baserunning speed” in MLB, those stats tend to come from tracking technology utilizing cameras rather than from anything players are wearing. So fitness wearable company WHOOP’s partnerships with the PGA Tour and the LPGA Tour are particularly interesting, especially as it’s led to usage of PGA Tour player heart rate data on broadcasts. Here’s an example of that from the Wells Fargo Championship coverage on Golf Channel last month, featuring Rory McIlroy:

Very cool to see the debut of #WhoopLive on the broadcast this week with my heart rate data in real time while I play.

My friend @willahmed and the entire team continue to do amazing things at @whoop. pic.twitter.com/HNvBS8aOF9

Will Ahmed, tagged there, is the founder and CEO of WHOOP. He recently answered some AA questions by email about their technology, which will again be featured on Golf Channel this week for the Thursday and Friday broadcasts of the Memorial Tournament at Muirfield. Ahmed said golf was a natural sport for his company to focus on, and the PGA Tour and individual golfers there have been great partners for them.

“Very early on, golf was one of the first sports that saw the value of WHOOP and really adopted 24/7 fitness tracking and health monitoring,” Ahmed said. “Everyone from weekend golfers to the best golfers in the world wanted to wear WHOOP and understood the importance of properly balancing training, sleep and recovery. From there, we started to organically develop relationships with the PGA TOUR and several top players, like Rory McIlroy and Justin Thomas, who could even wear WHOOP during tournament play.”

In some sports, a barrier to having this kind of player data displayed on broadcasts is the idea that sharing it may provide a potential competitive advantage for opponents. Ahmed said golf’s history of players collaborating and offering each other tips meant that this wasn’t as much of a concern there.

“We’ve seen that in golf, players are open with one another about sharing tips on how they can improve, both on and off the course. From what I’ve seen, golfers are more transparent with their fellow competitors than in other sports. That, in a way, is how WHOOP initially grew within professional golf. Players were talking about how WHOOP helps them understand their bodies. It’s become an essential piece of equipment, where if they can optimize these areas away from the game, it can help them improve performance on the course.”

And as per getting this to a place where live data could be shown on broadcasts, Ahmed said that came from a long process of working with players, the Tour, and broadcasters.

“It was a very integrated partnership involving players, technology partners and the PGA Tour First, we had to get the players excited about the potential of bringing their data to a television screen or to the fans directly. We also had to work closely with technology partners to be able to deliver this data in real time, which had massive technological challenges to overcome. We had to work with the PGA Tour and their broadcast partners, like NBC, to make sure that everyone felt they were excited about what we’re doing with the data and how it’s representing the game. It was pretty surreal to see that data on television for the first time and I think we’re going to be seeing it a lot more.”

That data is only used on broadcasts when players agree that it can be, though. And Ahmed said the reception there from top players, including McIlroy and Justin Thomas, has been promising.

“The players have been very open and impressed by the WHOOP Live feature. They actually have to opt in to have their data shown in real-time during the broadcast, so for many top players, they want to be involved with this innovation and help enhance the TV experience for fans.”

So, what exactly does showing a golfer’s heart rate add for viewers? Ahmed said he thinks it helps fans understand the pressure on competitors even more.

“Being able to see what’s happening inside an athlete as they go through a crucial moment in a tournament brings fans closer to the action like never before. It adds this wrinkle that you can see and almost understand what the player is going through and feel what they are feeling. Early on, it’s been fascinating to see how a golfer’s heart rate reacts before and after these high-pressure situations. How calm are they going into a shot, how nervous do they get after hitting an errant shot, or how do their bodies react sinking a clutch putt?”

The on-broadcast data is only a part of this wider WHOOP-PGA Tour partnership, though. Ahmed said the partnership’s also about helping athletes gain personal data on and off the court, which they can use to balance their own schedules and practice approaches.

“Everyone associated with the PGA TOUR has found WHOOP to be incredibly impactful in helping them optimize their performance. This performance not only includes the time spent training or in tournament play, but extends to when people are taking care of their bodies all around those moments, especially as it relates to sleep and recovery. Golf has become a true 24/7, year-round sport, and WHOOP provides these athletes with the data needed to balance their daily lives, tournament schedule, travel, practice, and even off days, that are critical to recovery.”

But the broadcast component is important, and Ahmed said he expects to see it used throughout this season and beyond.

“WHOOP Live will continue to have a presence on Golf Channel and NBC’s live coverage of the PGA Tour, as well as integration with other digital platforms. We’re hoping WHOOP Live will be involved with some really significant and memorable shots during the 2021 season, including the sport’s biggest tournaments.”

And he’s optimistic that this can make a jump to other sports. WHOOP already has athletes using their technology in other sports, and Ahmed said the PGA Tour partnership shows a way forward for live utilization of this data, one that may be embraced by other leagues and broadcasters down the road.

“Athletes from all sports wear WHOOP, so we feel there are endless possibilities to bring WHOOP Live to other leagues, organizations, and media channels. For the future of sports on television, it’s so important to keep innovating for the fans, and the PGA Tour  has been at the forefront of these new ways to engage their audience.”

More on WHOOP can be found at their site here.