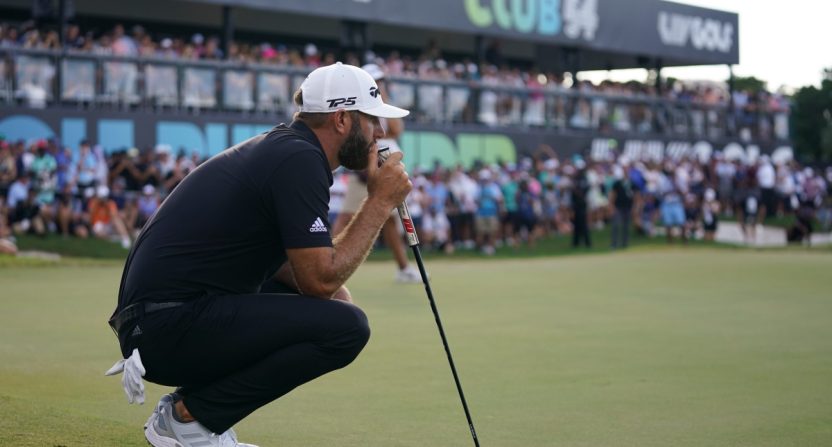 LIV Golf’s inaugural season wrapped up this weekend, with the final event held at Trump Doral in the greater Miami area.

LIV’s impact on the world of golf has been undeniable; some of the top names in the sport jumped ship, and while many are past their prime, landing players like Dustin Johnson and Cam Smith for an upstart league is truly an achievement. Not to mention the amount of press coverage, this site included, which justifiably focused on the biggest story in the sport this calendar year. The schism will have lasting repercussions for professional golf, no matter how long LIV lasts.

After all of that, though, and after billions of dollars spent on player contracts and prize money and marketing and beverage-delivery press room robots, a season of events has come and gone. And on YouTube, the only way for American audiences to watch, no one tuned in.

Below Final round recaps in 15 min increments. pic.twitter.com/70FLpvcKQF

Numbers fluctuated throughout the year, with some events in the summer certainly seen an uptick in streaming viewership, while events in Thailand and Saudi Arabia faced time zone issues.

That said, the global YouTube audience remains in the tens of thousands. That’s an absurdly low figure, and even with LIV having some rights deals with traditional overseas providers, it’s hard to imagine the overall global audience being anything close to justifying the enormous cash outlay.

Still, year one was never going to be an immediate success, although the way the product was rolled out did plenty to turn people off, perhaps with lasting repercussions. The real question is how LIV manages to grow an audience going forward. Without the splash factor of a brand new league (and a sort-of new format, although one that was difficult to parse), it’s hard not to look at that viewership trend and note the downward trajectory within the already-paltry numbers.

Demand isn’t just low from a viewership standpoint; you could get in for nothing this weekend on-site.

You can get in the door for pocket change on the secondary market. pic.twitter.com/pYfuH9vlXS

You’d think with continued additions of “name” players and more people understanding where to find the product, viewership may have trended up or at least held more steady. Obviously finding a traditional broadcasting partner is also key, but LIV has a lot of hurdles to get to that point; buying airtime on FS1 (assuming that’s the eventual route) may help a little, but the fact that they had to go that route to begin with says a lot about how hard it’s going to be to gain any sort of real market penetration.

In the end, though, it feels like LIV has a big army of bots and paid mouthpieces on Twitter and other social media networks, some really good players, some really unknown players, and a lot of funding from Saudi Arabia’s PIF that needs to go somewhere. LIV doesn’t have to make a profit to be “successful” by the standards of people backing it.

But it does have to make some sort of impact on someone. Based on how many people tuned in (or didn’t, really), it’s hard to see where that will come from; expecting LIV to return next spring to a massive boost in interest feels very unlikely barring major shifts in the golf landscape. Though as we’ve seen throughout 2022, those can certainly happen at any time.