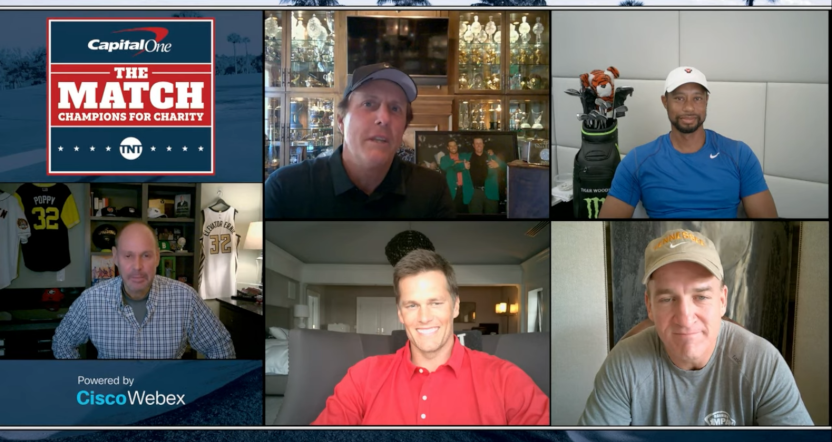 Back on April 22, Turner Sports confirmed that they would air a May follow-up to their Tiger Woods/Phil Mickelson The Match celebrity golf clash from 2018, this time involving Peyton Manning and Tom Brady as well. And they even put out an unbylined piece on Bleacher Report (also part of Turner parent corporation Warner Media) with a fair bit of detail. At that time, though, no specific date or location was known. Turner has now officially announced The Match, which will take place Sunday, May 24 at 3 p.m. Eastern. It will be held at the Medalist Golf Club in Hobe Sound, Florida, and will air across TNT/TBS/truTV/HLN. Here’s more from their release:

Turner Sports will present Capital One’s The Match: Champions for Charity, a blockbuster live golf competition headlined by golf icons Tiger Woods and Phil Mickelson returning for a rematch, this time joined by Tom Brady and Peyton Manning, two of the NFL’s greatest players of all time. The premier sports event – simulcast exclusively on TNT, TBS, truTV and HLN – will be held Sunday, May 24, at 3 p.m. ET, with pre-match coverage available in the Bleacher Report app. Associated with the live telecast, WarnerMedia and the golfers will collectively make a charitable donation of $10 million to benefit COVID-19 relief. As part of the fundraising efforts, the competition will also include a partnership with the ALL IN Challenge, along with additional on-course competitive challenges for charity.

…In partnership with the ALL IN Challenge, all four participants will have donated custom experiences that will raise millions towards the cause, with viewers having the ability to enter into a live raffle for ones featuring Woods and Mickelson during the telecast as well.

“The COVID-19 pandemic has caused unimaginable tragedy and heartbreak,” said Jeff Zucker, Chairman, WarnerMedia News and Sports. “We’re hopeful this event and platform will help raise meaningful funding for COVID-19 relief, while also providing a source of brief distraction and entertainment for all sports fans.”

…The competition will feature Woods and Manning vs. Mickelson and Brady, facing off in Team Match Play with a Four-Ball (Best Ball) format on the front nine and a Modified Alternate Shot format on the back nine, where each participant will tee off and then the team will play alternate shot from the selected drive. The unique combination of formats is aimed to provide an entertaining mix of strategy, team collaboration and consequence to nearly every shot. As part of the competitive play, there will also be a set of on-course challenges to raise additional charitable funds.

Here’s Turner’s Ernie Johnson interviewing the participants about what to expect:

As Variety‘s Brian Steinberg notes, advertiser demand for this has been so strong that Turner has already sold out their TNT slots:

Deciding to mount such a match amid the economic pullback that has accompanied the virus was “quite a risk,” acknowledges Jon Diament, executive vice president and chief revenue officer for Turner Sports, in an interview, but “we had demand for double the amount of inventory that we had.” Executives continue to get calls from advertisers, he says, and are trying to work on ties to the event via digital media and addressable advertising. “We are looking to get creative to extend the power of the match in the marketplace, but our TNT coverage is 100% sold out.”

…At a time when advertisers are pulling back millions of dollars in TV commercials, they continue to gravitate to anything associated with sports – even when there isn’t a true game on the field. “Capital One knows our customers are passionate about sports, which is why we are excited to support this event and to help bring awareness to these amazing charities,” says Marc Mentry, chief brand officer of Capital One, which will serve as title sponsor of the event.

There will still be Bleacher Report and House of Highlights digital coverage and features ahead of The Match proper, so that may be an area where more advertisers can come in. And the broadcast will feature all four participants wearing open mics through the whole competition, and they’ll have “the capability to communicate directly with other golfers and the broadcast commentators.” The actual broadcast team is set to be announced at a later date.

With the current demand for sports, and with The Match broadcast on Turner’s cable channels rather than an (attempted) pay-per-view, it seems likely we’ll see a lot of viewers at least checking part of it out. And that’s perhaps especially true with it airing on the Sunday ahead of Memorial Day. We’ll see how this goes, but it’s definitely an attention-grabbing move, and one that could work out well for Turner.