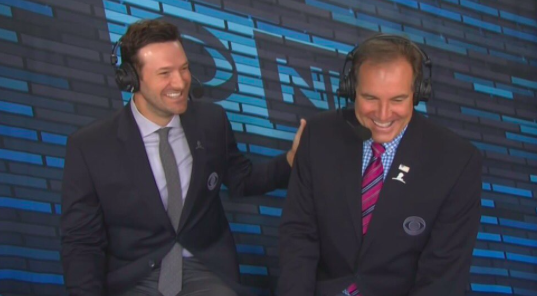 Tony Romo was by most measures an upgrade over Phil Simms as CBS’s #1 NFL analyst this season. His enthusiasm and his obvious chemistry with Jim Nantz, along with his golfing background, led many to wonder whether we’d see Romo slide into the booth (or tower, as it were) for a few PGA Tour events on the CBS schedule.

Nantz, speaking to Golf.com at the PGA Merchandise Show in Orlando (he’s there for Vineyard Vines, which is too perfect), hinted that Romo was likely to make an appearance during CBS’s golf coverage, but not in the role we might be expecting:

“He’s going to play in a Tour event,” Nantz told GOLF.com’s Jessica Marksbury at the PGA Merchandise Show. “He’s going to get an exemption in the next — let’s just say two months. So he’s going to put it out there on the line.”

That’d be an interesting choice for whichever tournament extends that exemption, considering Romo isn’t anything close to resembling a professional golfer. We saw a Web.com Tour event invite Steph Curry last fall, and though Curry acquitted himself rather well considering his day job is being one of the best basketball players in the world, he still shot 74-74 to miss the cut by 11 shots.

There’s one obvious possibility, though, and it’s actually an event in which Romo has competed already, though as an amateur: the AT&T Pebble Beach Pro-Am. It’s already a bit of a circus, with CBS annually trotting out a series of low-grade celebrities while ignoring the actual golf being played.

Racking my brain to figure out which event this could possibly be.

Nothing springing to mind that would have say a Dallas-based sponsor, thirsty Saturday coverage before a 54-hole cut, and deep Nantz connections. ??‍♂️ https://t.co/G6BMiP4B7y

CBS already faces plenty of criticism for their golf coverage, which consistently lags behind NBC and FOX in terms of quality and innovation; leveraging some corporate synergy to slide their NFL analyst into an actual event would be more ammunition.

Maybe let him try his hand in a web event or two? He didn’t exactly light the world on fire at the Western Am last year. pic.twitter.com/wjxF2zheAN

Having said all of that, Romo as an addition to the CBS broadcast team? Nantz didn’t rule it out.

“There’s been a lot of talk swirling that he would come join the CBS golf group, but there’s nothing on that that’s final right now,” he said.

That’s something that could be worth exploring, if only because Sir Nick Faldo is so consistently disappointing. Maybe golf would even tone down some of Romo’s more annoying football broadcasting tics.

It seems like just a matter of time before Romo makes a cameo appearance in that capacity, but we’ll apparently have to wait for him to finish DFL in a PGA Tour event first.