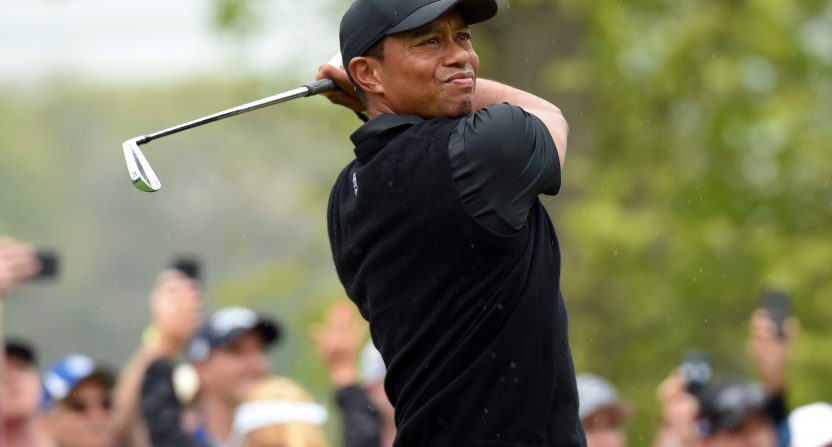 The PGA Championship this weekend, its first in its new mid-May time slot, is normally a big deal, but everything is amplified and magnified because of Tiger Woods’ win at The Masters last month and his pursuit of yet another major championship.

This article is comprised of Awful Announcing’s interviews with key CBS, Turner and ESPN talent, and it wouldn’t have been written if not for Woods’ Masters win and the all-encompassing buzz that’s created for this weekend’s tournament.

“It makes what we’re doing feel bigger,” said TNT and CBS reporter Amanda Balionis, who will work the tournament for both networks this weekend. “There’s more eyes on it, there’s more people talking about golf.”

To say that Tiger is the most popular player in the game’s history would be an obvious understatement, but Woods’ absence from contention over the last several years before his April ascent reminded us of his resonance and reach.

“Of course if Tiger plays, then the attention is seriously magnified, isn’t it?” CBS’ Nick Faldo said in his uniquely rhetorical way. “Inside the ropes, outside the ropes, through television. It is a different ballgame. It always has been.”

Lance Barrow has been the coordinating producer of CBS’ golf coverage since 1997, so he knows better than most the power of The Tiger Factor.

Andy North has reported on golf for ESPN since 1992 and knows that Tiger drives ratings above all else.

“If you look at the weeks he plays golf, the ratings are twice what they are when he’s not there,” North said. “So it’s hard to argue that he’s not awfully important to our business.”

This is the last year Turner has rights to the PGA before ESPN takes over in 2020, and Turner used its digital partnership with the PGA to make big strides in its Thursday coverage.

“We’ll be patterning a lot of our coverage around him,” said Brian Anderson, Turner’s lead golf voice for the weekend.

Woods teed off early Thursday morning, which meant that the PGA’s and Turner’s digital assets had exclusive coverage of Tiger’s feature group. They were able to cover his every move, which is something you can’t do on a linear broadcast.

“The product we do on the digital side really lends itself to talking about special things that Tiger’s doing,” said Gary Treater, the general manager of PGA.com for Turner Sports, which manages the digital product. “In-depth, wall-to-wall coverage, from the first tee shot to the last putt.”

TNT’s opening round coverage was up 13 percent from last year and PGA.com had a record number of live hours of video consumption for a single day and video views reached an all-time high for a Thursday of a tournament. Thanks, Tiger!

On Friday, TNT will be able to broadcast the entirety of Woods’ round, with the second screen full coverage available digitally. But Anderson did want to remind people that Woods is not the only talented golfer out there, as evidenced by Brooks Koepka’s round of 63 on Thursday.

“This is one of the great fields golf could assemble,” Anderson said. “There were a lot of years where he was the only story and that’s really all that mattered.”

Like CBS, Turner has some highlight packages of The Masters and his past performances at the Bethpage Black course on the ready if needed.

North is the only ESPN talent on site, and like so many other outlets from around the world assembled on Long Island to cover the tournament, Tiger is driving everything, especially when he’s primarily just doing reports for SportsCenter.

“They want to hear about Tiger,” North said. “So as we go heavy Tiger, he drives the numbers. A majority of what we’re trying to do is Tiger and the leader. And if it happens to be the same person then we’ve got something.”

CBS will carry the prime afternoon windows on Saturday and Sunday, and it’s up to Barrow how to balance the Tiger coverage during those pivotal periods.

If Woods isn’t in contention on Sunday, CBS will still periodically update its viewers on how he did if he finishes before the network goes on the air, or on how he’s doing if he’s still playing during the broadcast window.

The same goes the same for CBS’ analysts.

Faldo’s CBS colleague Gary McCord has a similar feeling. Whoever is on his monitor is who he’ll talk about, but with Woods, McCord said that by his eyes and the way he swings, you could tell if he’s in his zone or not.

“When he’s playing really well, there’s a set of circumstances you’re aware of,” he said.

And then when Woods is done playing for the day, it’s up to Balionis to talk to Tiger and give the people what they want: his voice.

“He’s the only one in our game, whether he shoots an 80 or a 62, people want to hear from him,” Balionis said. “And something you don’t see a lot, is he does it 90 percent of the time. He is the most gracious with his media time of probably any player in our generation.”

And Tiger moves the needle unlike any player in golf’s history and that really elevates the game, Balionis said.

“People might tune in for Tiger, but then they might find another golfer that they fall in love with and become fans,” Barrow said. “And that’s always good for golf.”