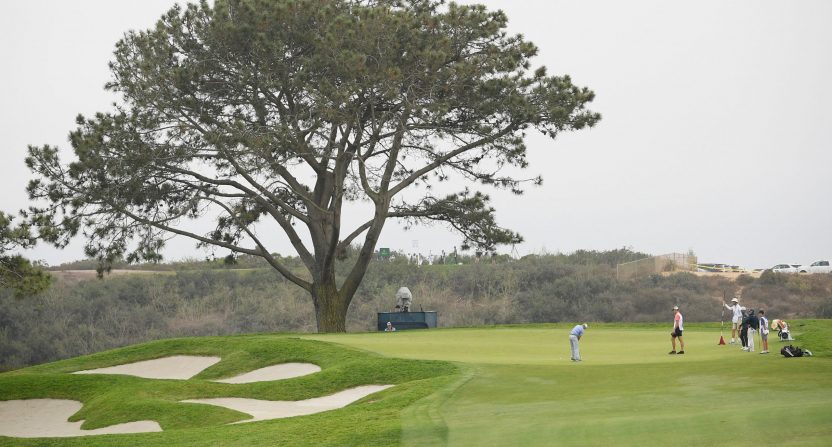 The NFL is such a television juggernaut that other professional sports calendars end up being moved to avoid conflict.

That’s not new. It’s not even new for the PGA Tour, which revamped its entire calendar and “playoff” schedule in order to avoid going against the NFL (and to a lesser extent college football) after Labor Day. But with the NFL adding an extra week to the regular season this year, resulting in the postseason shifting another week further into the spring, the PGA Tour had to shuffle things again. The Waste Management Phoenix Open wanted to remain on Super Bowl Sunday, as has been tradition. (The Tour is even opening a sportsbook at TPC Scottsdale.)

This weekend, though, the Farmers Insurance Open at Torrey Pines faces different competition. It was traditionally played during the dead weekend between Championship Sunday and the Super Bowl, with the only conflict being the Grammy Awards, the start of which slow players sometimes held up. To avoid a final round being wiped out from a ratings perspective (and network conflicts), the tournament will finish on Saturday instead, which means it starts today.

The tournament CEO went on the record this week describing why the change had to be made, and how they’re hoping to make the best of the situation. Via Kirk Kenney at the San Diego Union-Tribune:

“If we can start to create some history and tradition around this,” [CEO Marty] Gorsich said, “we could really embrace this and turn it into our own.

“It would be our differentiator, our thing that makes San Diego different from other events. … Every challenge brings opportunities.”

Had it stayed with a Sunday finish, Gorsich said, the broadcast itself would have been problematic.

“CBS, our broadcast partner, has one of those football games,” Gorsich said. “It wasn’t even like we would be on TV against the NFL. We wouldn’t be on TV at all, unless we switched to another network, and that brings a whole bevy of challenges.”

Indeed, with coverage shifted back a day, the move allows for primetime network viewing on Friday night, with CBS airing coverage from 5-8 PM Eastern. Saturday’s final round will also get that treatment, finishing from 4-8 PM Eastern on CBS.

The problem, though, is that while the tournament picks up a weeknight of primetime, that’s not going to outweigh the loss of a weekend primetime slot, largely unopposed by other sports. (A related note: today’s live opening round coverage on Golf Channel airs from 12-4:30 Eastern, while the collegiate Southwestern Invitational gets the primetime window.)

This is not an ideal situation for anyone involved, and while there might be ways to spin the changes into positives, it’s hard to imagine the tournament coming out ahead in the end. Here’s Gorsich again on the revenue they’ve lost just by being unable to have the usual Wednesday pro-am round:

With nearly 200 amateurs on the course — most of them (or their companies) paying $8,000 for the privilege — that’s at least a $1 million financial hit.

It is being offset this year with assistance from the tour and title sponsor.

Gorsich envisions turning even that negative into a positive. Perhaps next year when organizers have a full year to plan something special.

“Instead of the pro-am, what if we had a tee-off dinner and you got to play cornhole with Dustin Johnson for an hour?” Gorsich said. “You might make as much or more money. The pro-am was people who golfed. The chance to rub elbows with a pro in a fun, safe, casual environment where they can just be real people, anybody can do that, not just golfers. My potential buyer audience actually grows.”

Again, this is one of the higher-profile PGA Tour events, held annually in a huge market, in primetime, on a course that has detractors but makes for great television vistas and serves as a U.S. Open venue.

It’s impossible to overstate how much of a media behemoth the NFL is, but if the massive ratings for the playoffs aren’t enough of an illustration, just think about the random PGA Tour tournament CEO who has to ask Dustin Johnson and Jordan Spieth to play cornhole with strangers next year because an entirely different professional sport added a week to the regular season.