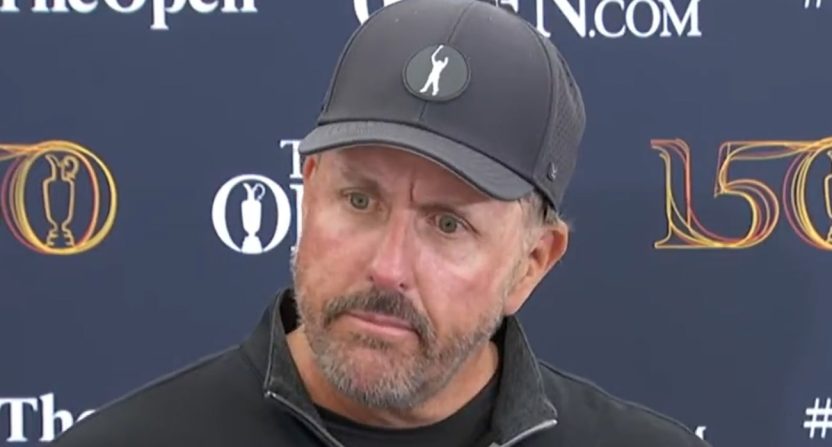 Phil Mickelson must know questions about his controversial relationship with LIV Golf aren’t going to let up anytime soon. But that didn’t stop him from lashing out at a reporter following his first round at the Open Championship on Thursday.

After a respectable round of even-par 72, Mickelson was asked six questions about his performance on the course and 11 questions about the Saudi-funded LIV Golf Invitational Series. One reporter asked Mickelson why he didn’t attend the Champions Dinner at the 150th Open, a celebration of all past winners, such as himself (he won the event in 2013).

“The [organizers] R&A contacted me a couple weeks before and said, ‘Look, we don’t think it’s a great idea you go, but if you want to, you can,'” Mickelson said. “I just didn’t want to make a big deal about it, so I said fine. We both kind of agreed that it would be best if I didn’t.”

Mickelson’s decision to skip the dinner came after LIV Golf figurehead and two-time Open champion Greg Norman was not invited to St. Andrews for their celebration of the 150th Open. After Mickelson answered the first question about the Champions Dinner, he was met with three follow-ups. The first follow-up asked if Mickelson felt not attending the event took away from the week at all.

“No. I love being here. I mean, everyone here loves golf,” Mickelson said. “And we found this place to be very spiritual. So, as great as this game has been to me and to be able to come to the home and compete again … I think this is my sixth one here. I’ve had some great moments here.”

Follow-up number two asked whether Mickelson thought it was “very sad” to be in this position.

“No. Not at all. I couldn’t be more excited and ecstatic with where I’m at,” Mickelson said. “I love the events. I get to have golf in my life, and competitive golf in my life, on a scale that is fun, exciting, different, and lets me play and compete but still do the things outside that I want to do. I have a nice trip lined up after this and things that I haven’t been able to do in the past. So, no, I couldn’t be happier.”

And finally, the third follow-up which caused Mickelson to snap back.

“Even missing out on an occasion like the past champions dinner with the 150th,” the reporter began before Mickelson interrupted the question.

“Let it go dude, let it go… I couldn’t be happier” — Phil to a reporter following his opening round 72. pic.twitter.com/AmEVXDi0T0

“Let it go, dude. Let it go,” Mickelson fired back. “That’s three times you’ve asked the same question. I don’t know what to tell you. I couldn’t be happier.”

For now, Mickelson probably views the questions as a small price to pay for the nearly $200 million he’s reportedly receiving from the Saudi-backed tour. And in this case, where he snapped at a reporter’s questioning, Mickelson’s irritation seemed to be less about the topic and more about the continued harping over something he willingly addressed twice.