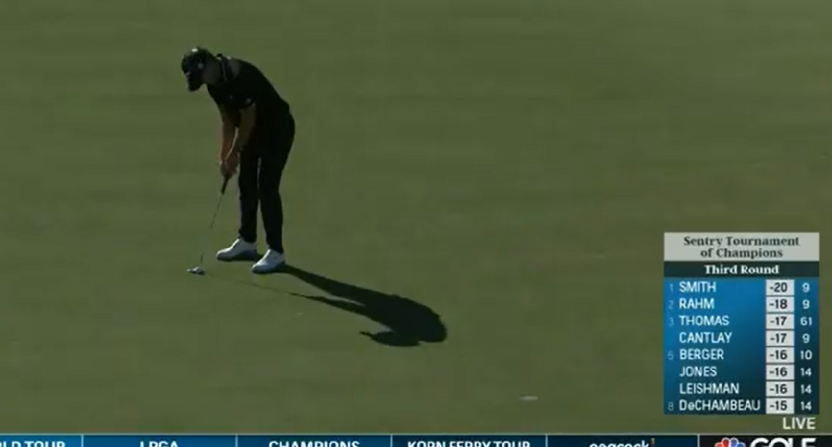 The Tournament of Champions, annually the first PGA Tour event of the calendar year is currently ongoing in at Kapalua in Hawaii.

Always one of the more pleasant watches in golf thanks to the primetime coverage and scenic vistas (especially if you’re, say, dealing with freezing rain and cold temperatures right now), the limited-field event usually unfolds with a very relaxed overall vibe.

Tonight’s Golf Channel coverage was no exception, to the point that with Patrick Cantlay about to sink a birdie putt on the par 4 10th hole, someone in the booth (or one of the towers, it’s hard to tell with golf) decided to pop open a cold can of something.

Golf Channel After Dark: someone in the booth audibly cracking open a cold beverage.

(We FULLY approve, to be clear!) pic.twitter.com/6zIGfN9rnT

It’s fantastic that it was Patrick Cantlay getting ready to play, as it serves as a wonderful thematic link back to our previous Golf Channel After Dark moment, from pre-pandemic times in January of 2020.

Back then, hot mics caught Cantlay on the 17th tee doing a fantastic impression of an overzealous tournament official forcing players to keep going in bad weather, before segueing into telling his caddie there were just two holes remaining before they could hit the bar for some cocktails.

“I’ve been waiting for this weather for 40 years! These pampered fucks need to play! All right, Revvy. Two more holes then we can get a mai tai.”

Cantlay was obviously a more passive participant this time around, but it’s a nice bookend moment all the same. And hey, whether it was a Kona Golden Wave or a coconut LaCroix, there’s no better tournament to pop open a can of something. Obviously the network would probably prefer the sound effects not make it to air, but here we are.

After that, the broadcast didn’t exactly normalize, either:

Tremendous content all around. There’s also some golf being played; Justin Thomas set a course record with a 61 today, while rising Aussie star Cam Smith has a two-shot lead over Cantlay and world #1 Jon Rahm.

It should make for a fun final round tomorrow evening, even without the possibility of extra hijinks. (And there’s definitely a possibility of hijinks.)