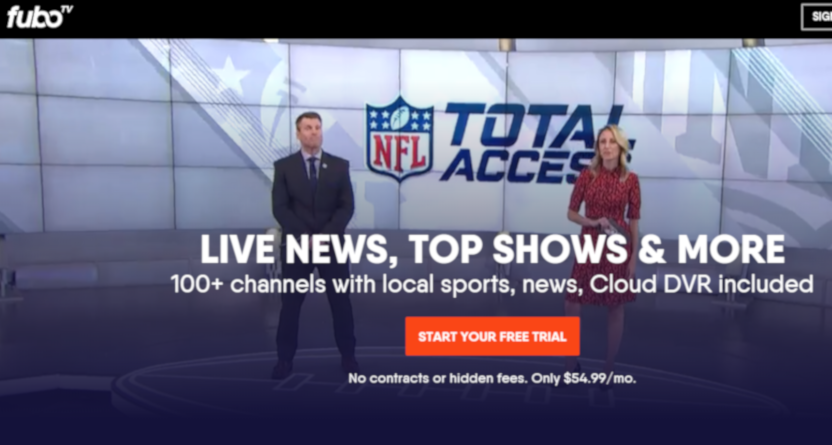 After announcing last week that they would add Disney Media Networks channels, including ESPN, ABC, ESPN2, Disney Channel, FXX and more, streaming bundle company fuboTV has now revealed that they’ll be both increasing the price of their base package from $55 to $60 a month and also dropping 11 WarnerMedia channels (which they added back in August 2018). The dropped networks? TNT, TBS, CNN, Adult Swim, Cartoon Network, Boomerang, truTV, HLN, TCM, CNN Español and CNN International. So that means those looking to watch NBA and MLB games on fuboTV this fall will be missing some of the action (although they will be getting some games from both leagues on ESPN’s networks). And it seems like this is more of a permanent divorce than a short-term carriage dispute, at least as per statements from both sides (via Dade Hayes at Deadline):

In a statement referring to the “termination” of Fubo carriage, WarnerMedia did not appear to be leaving the door open for a deal. “We are disappointed that our deal with fuboTV is not being renewed, as we have been working with them and were open to a potential renewal,” the statement said.

“In order to continue to provide the most value to our customers at a reasonable price point, we will not be renewing our contract with WarnerMedia,” a Fubo spokesperson said. “Despite these changes, and with the upcoming launch of ESPN and Walt Disney Television, fuboTV’s sports-focused cable TV replacement will offer a market-best 43 of the top 50 Nielsen-ranked sports, news and entertainment channels in our base package.”

It’s somewhat understandable why fuboTV is making this changes, especially after adding the Disney networks. The price hike alone will not cover the cost of adding the Disney channels, especially with ESPN’s industry-leading per-subscriber fee. As AA’s Joe Lucia wrote last week, “Bundling all of them together will cause fubo to pay a significant amount in carriage fees – $16, per an estimate last fall.” And that estimate has the WarnerMedia channels coming in at around $6.50 per month in per-subscriber fees, so even cutting them and raising the fuboTV price won’t make this revenue-neutral for the streaming service. But cutting them makes it perhaps possible to offer a less-dramatic price increase than the 30 percent hike ($49.99 to $64.99 monthly) YouTube TV unveiled this week.

This further emphasizes a couple of trends we’re seeing with streaming providers, though. For one, streaming package prices are continuing to rise to something that’s closer to a traditional cable or satellite bundle (and considering that they require a good internet plan, which is often cheaper if bundled with traditional cable or satellite, the savings aren’t always that significant). For another, most of the streaming providers have significant sports content gaps. For example, fuboTV has removed the problems they face by not having ESPN, but they’ve added issues with not having TNT and TBS (and truTV for a few days each March).

Yes, fuboTV has have some advantages over some other streaming bundles, especially with their carriage of NFL Network (which currently isn’t on AT&T TV Now, YouTube TV, or Hulu+Live TV). But those bundles have their own benefits in addition to their shortfalls, and some of them may be more appealing depending on the specific sports channels you want. fuboTV has solved one glaring issue by adding ESPN’s networks, but losing WarnerMedia’s networks in the process sets them back a bit. (Of course, that’s not all necessarily on them; it’s worth keeping in mind here that WarnerMedia parent AT&T owns their own streaming service with AT&T TV Now, which gives them less of an incentive to make favorable deals with competitors to that service, including fuboTV.)

Will the move to add ESPN and other Disney networks while dropping TNT and TBS and other WarnerMedia networks work out for fuboTV in the long run? It’s hard to say. In terms of strict value, $5 in extra costs for an estimated $16 worth of per-subscriber fees in content is nice, and that’s enough of a boost to overcome even an estimated $6.50 of per-subscriber fees being taken away. But whether that makes fuboTV a more appealing package depends on what channels you watch; if you care about ESPN’s networks and the former Fox portfolio of things like NatGeo and FXX, this is great news for you, but if you value the likes of TNT, TBS and CNN more, this is a loss for you.

Of course, adding ESPN’s networks does fit with fuboTV’s focus on marketing to sports fans. The service has always been a tough sell for many sports fans without ESPN, and that hurdle is now gone. And this move does increase the amount of sports content they’ll have overall; ESPN’s networks are focused on sports content around the clock, apart from the occasional Eagles concert film, while TNT and TBS are wide-ranging basic cable channels that show sports as only part of a wider lineup of movies and TV.

But losing WarnerMedia channels shortly after adding ESPN channels is interesting, because it limits who you can market to to sign up for or keep your streaming bundle. In particular, this means that fuboTV has picked up some NBA and MLB content they didn’t have before, but they’ve lost some of the content in those sports they used to have. So dropping these WarnerMedia channels means that fuboTV hasn’t necessarily gained much of a marketing advantage when it comes to attracting or retaining NBA or MLB fans. There are some other big gains for them with having ESPN networks rather than WarnerMedia ones, especially on the college football and NFL sides, but the loss of the WarnerMedia channels means that the ESPN networks addition isn’t as significant of a sports content boost for fuboTV as it appeared to be last week.