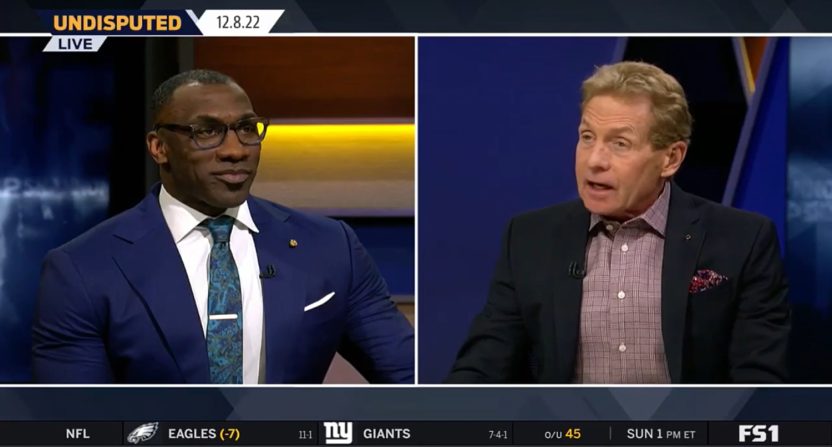 For two and a half hours Thursday morning, Skip Bayless and Shannon Sharpe discussed Tom Brady, the Dallas Cowboys, Odell Beckham Jr., the Boston Celtics and of course the Los Angeles Lakers, but there was no mention of Griner.

Griner had been in Russian prison for 10 months, when she was detained at a Moscow airport on drug smuggling charges for carrying vape cartridges containing CBD oil. Thursday morning, the White House announced Griner was released in a prisoner exchange for international arms dealer Viktor Bout, also known as the “merchant of death.”

Since Griner was detained in February, her wrongful imprisonment has been a major topic of conversation in the world of sports, politics, and even entertainment, with celebrities actively advocating for her release. The release of a WNBA star from Russian prison seemed like an obvious topic to at least be mentioned on every national sports and political show in the United States.

Bayless and Sharpe didn’t have to debate Griner for a full segment on Undisputed. They didn’t have to take a stance on celebrating the correction of injustice or criticizing the cost of the deal. But they could have at least acknowledged that this significant national sports and news story was taking place.

In comparison to Undisputed, Stephen A. Smith began First Take with 35 minutes of commercial free Brittney Griner coverage on ESPN.

It wasn’t a Fox decision to avoid the topic on Thursday, because The Carton Show precedes Undisputed on FS1 and discussed Griner’s release. It wasn’t a “stick to sports” decision either, because aside from the fact that Griner’s release is a sports-related topic, Undisputed discussed the Senate runoff election in Georgia just 24 hours earlier. Bayless and Sharpe did speak about Griner on their show over the summer.

The absence of Griner from Thursday morning’s Undisputed was so glaring that it bears wondering whether the show was prerecorded. But considering Bayless and Sharpe film the show in Los Angeles, where it’s 6:30am locally when they start breaking down games from the night before, I can’t fathom how an overnight prerecord would make sense. (And Bayless has spoken repeatedly about waking up at 2 a.m. to start his pre-show routine.)