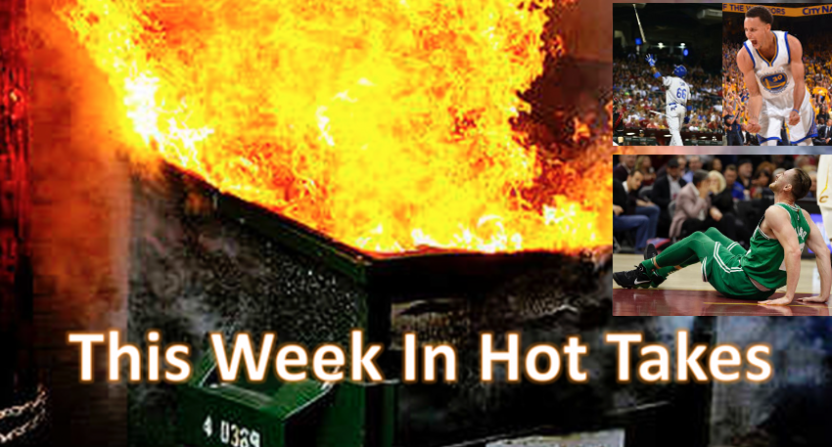 Welcome to another edition of This Week In Hot Takes! This time around, we’re looking at the hottest sports media takes from Oct. 13-19.

I've covered broken necks, a sliced jugular and boxers dying in the ring. Tough injury to watch tonight, but no need for a candlelight vigil

Way to trivialize a serious injury while simultaneously making it all about yourself.

4. Rob Parker has already given the Warriors the title: There have been plenty predicting that Golden State will win the NBA championship this year, but FS1’s Parker took it further than most, arguing that there’s no point to the season because the Warriors are assured victory:

Difference between MLB and NBA. When MLB playoffs started w/10 teams, no one knew who would win WS. In NBA, b4 season, we know Finals winner

Turn away from Twitter if u don't wanna know who wins the NBA Finals at the end. Golden State Warriors. #shocker

Wake me up in June. https://t.co/eRwFVUlKpg

Arguing that Golden State should win again is one thing, but saying that there’s no point to the season because that victory’s so certain? That’s a pretty hot take.

3. Keith Olbermann is “so effing tired” of Yasiel Puig: Olbermann, the former ESPN and current GQ personality, last appeared in this column for his hot takes on rap music, and now he’s going after Dodgers’ star Yasiel Puig. Puig flipped his bat Saturday after hitting a double, and that got Olbermann mad:

Olbermann got appropriately criticized for that one:

Come on! Those unwritten rules. pic.twitter.com/1l0vsi7Amv

NO Keith. I like you and this statement is wrong. Puig brings fire and fun to this team.

Maybe you should rap about it.

But Puig himself had the best response:

Hey @KeithOlbermann I flip on singles and doubles & not on homers. Come watch the show. Need a ticket? I got you #PuigYourFriendToo ? https://t.co/7Ror8AyGRg

2. Phil Mushnick says baseball needs less Yasiel Puigs: Continuing on with the Puig theme, New York Post columnist Mushnick has long gone after baseball players who dare to celebrate or show emotion on the field, and that’s made Puig one of his favorite targets. That continued in Mushnick’s columns this week (and continued the string of Mushnick and Olbermann saying problematic things along the same lines in the same week). Mushnick particularly went in Thursday’s “Why baseball doesn’t need more Yasiel Puigs“:

If you were raised to love baseball and to recognize the smart, winning kind from everything less, the Dodgers’ Yasiel Puig is insufferable. As the sport is diminished by professionals who disregard the basic act of running to first base as a matter of style, Puig, an incurable home-plate poser, often makes turning doubles and triples into singles appear effortless.

Despite his conspicuous talent, Puig last season was remanded to the minors to get the point across that baseball, despite modern, no-upside compromises, remains a team game. It didn’t take.

In the postseason, Puig continues to behave as if he’s in the Home Run Derby. He even seems to relish his high-risk flamboyant foolishness despite frequent backfires. Yet, some are good with that, or at least pretend to be in the shallow hope of being heard or read as avant-garde.

And in another column Monday, Mushnick again went off on Puig for celebrating after only hitting a double (and on TBS analyst Ron Darling for not criticizing him enough):

L.A.’s Yasiel Puig is a notorious me-first showboater who has even been sent to the minors to try to instill the importance of things such as running to first when he thinks — often erroneously — he has hit a home run. Friday, manager Dave Roberts said Puig “loves the red light,” which translated to: He plays as much for TV cameras as he does the Dodgers.

…Yet, with the Dodgers down 2-0, runners on first and second, Puig stood at home raising his arms in incurably premature home run self-glory — until the ball banged off the lower half of the wall in left-center. After getting a late start, Puig made second; his three-run homer became a one-run double.

But Darling chose to explain his common, obvious new-age stupidity with the preposterous: Puig was in self-aggrandizement mode because he knew “He hit it hard enough to get the gap.” Instead of stating that Puig, yet again, went into his premature HR pose, Darling praised him for performing his “gap” pose. And it was insulting.

Brett Gardner kept a Game 4 ALDS inning alive and scored Starlin Castro from third when he helped force a bad throw by running hard to first with two out. Where, asks reader Frank Connelly, would Robinson Cano have been? He’d have been on first, too — first step of the dugout.

1. Skip Bayless makes Gordon Hayward’s injury a chance to take a shot at LeBron: We covered one bad take on the Hayward incident already, but this one was even worse:

If Gordon Hayward is gone, maybe for the season, LeBron's path to losing a sixth finals gets even easier.

Bayless got plenty of deserved blowback for that one, including from NBA stars:

Really? You are a heartless Clown. Go paint your face! https://t.co/1HYNPwdw7T

You’re a clown for that tweet after a man gets hurt with a potential career ending injury! Shit bigger then basketball!

Skip, give it a day. Guy just broke his leg on national tv during his first game in Celtic Green. https://t.co/CEqzyeU3Ji

I honestly thought it was the onion. https://t.co/y22xWrSyG8

You're really a sensationalist jerk Skip. Hope the attention you get from this is enough.. it wont be. It wont ever be. Shannon > you

Bayless’ obsession with LeBron has been well-documented, but making a horrific injury to a player on a different team on the first day of the season all about LeBron is maybe a new level for him.