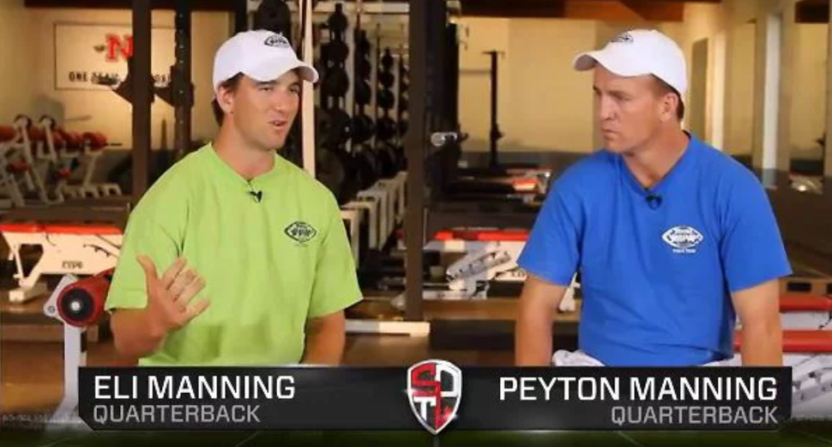 While Peyton Manning decided in the end not to call games for ESPN or Fox this year, details are still coming out on just how far those networks were willing to go in pursuit of him, and one particularly interesting one comes from Andrew Marchand of The New York Post. Marchand writes that part of Manning’s reluctance was about the possibility of having to criticize his brother Eli on-air, and that Fox in particular was willing to try and drop Giants’ games from TNF for him:

In rejecting Fox and ESPN’s primetime broadcast booths, Peyton Manning said he did not want to be a “critic at this point,” but there was one player’s games in particular, according to sources, whom Manning did not want to be in the booth for: his brother, Eli Manning.

Manning’s desire was so strong, there was even talk, according to sources, that if Manning had agreed to do Thursday night games, Fox would try to make it so the Giants did not show up on its primetime schedule.

Fox potentially would have had the logistical power to ask the NFL to make it happen because it could, in theory, keep its Giant games on its NFC-heavy Sunday package.

For Peyton, not doing Eli’s games was not necessarily a deciding factor in turning down Fox and ESPN, according to sources, but it was part of the process.

That’s a pretty dramatic step, as the Giants play in the biggest media market out there and were the sixth-biggest primetime draw in 2016. And yes, they’ve taken an on-field downturn since then (from 11-5 in 2016 to 3-13 last year), but they’re still an important team for primetime appearances, receiving four last year and four this coming year. Two of those games are set for Thursday Night Football.

Now, as Marchand notes, Fox could have perhaps got those games shifted to its Sunday afternoon package, which tends to draw even higher ratings. But that would have left them with likely a weaker Thursday slate, and it would have also forced them to expend some capital with the NFL, and to do so on shifting the schedule to make a particular broadcaster happy versus shifting it to produce the best possible broadcast ratings. That would have been a very bold step, and one that showed the network was willing to move heaven and earth indeed for Manning. There was already that impression, especially when it came to things like perhaps borrowing Mike Tirico from NBC, but this confirms it.

However, Marchand’s piece also has some interesting salary details about the offers made to Manning by ESPN and Fox, and they’re much lower than the $10 million a year Michael McCarthy of The Sporting News reported back in March. As per Marchand, ESPN’s offer was around $6.5 million annually for the 20-week MNF schedule (similar to what Jon Gruden received) with a chance of being bumped to $7 million, while Fox’s was around $4 million annually (four years, $16 million) for the 11 weeks they have TNF, with both working out to around $350,000 per game (Fox’s being slightly more at $363,000 per). Those are still major chunks of change, but they’re not as high as the $10 million annually McCarthy’s sources said both networks were willing to go up to, and they’re at the upper (Gruden) end of previous pay for an analyst, not well beyond it.

It’s of course still possible that there was a willingness to maybe go that high if Manning had been more interested in the job and/or had demanded it, and it’s also possible that the ESPN offer in particular would have gone higher if it also included some non-game work (such as Gruden’s QB Camp, now replaced by Russell Wilson’s QB2QB). But the money probably wasn’t the biggest deal for Manning, anyways, as he made a ton during his career and continues to make a ton as a pitchman and paid speaker. The willingness to accommodate his desires when it comes to scheduling perhaps speaks even more about what these networks were willing to do to try and get Manning.

And this report makes it maybe even more surprising that Manning  turned the networks down. It also suggests that it’s not all that likely he’s heading to the broadcasting world any time soon. If he’s convinced he didn’t want a broadcasting job even under these kinds of circumstances, with two networks in hot bidding for him and at least one even willing to remake its schedule according to his preferences, it’s hard to see much that would lure him into the booth.