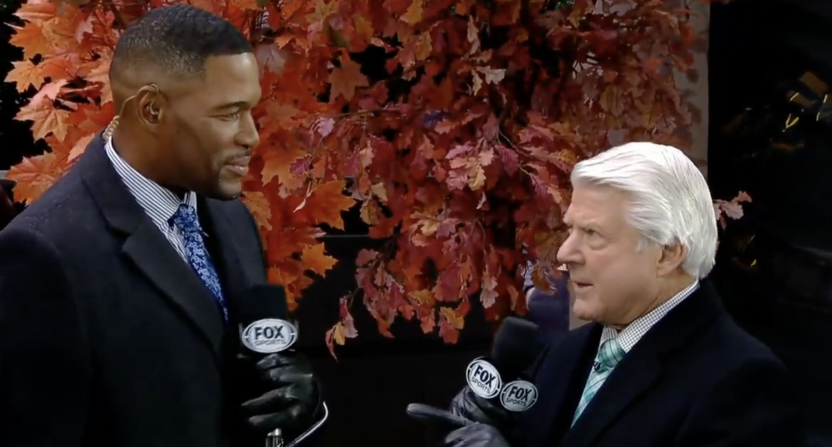 An entire generation of NFL fans only knows Jimmy Johnson as a TV studio analyst for Fox Sports and specifically, as an analyst on Fox NFL Sunday. But before he had that gig, Johnson had a storied college football and NFL coaching career that notched him two Super Bowl victories with the Dallas Cowboys and a national championship with the Miami Hurricanes. Along with a national championship won as a player for the Arkansas Razorbacks, he’s one of the most decorated and accomplished people American football has seen.

Even with everything he’s accomplished in his playing, coaching, and broadcasting career, Johnson still has some regrets. And his biggest one involves something he works with every Sunday…Michael Strahan. Johnson told the former New York Giants player and current Fox host directly on Sunday.

Former #Cowboys HC @JimmyJohnson tells the story of the biggest regret in his career: Not drafting @michaelstrahan before the @Giants ? pic.twitter.com/IzCZxH3idm

“The biggest regret I have in my entire career involved you,” Johnson told Strahan. “Here we’re getting ready for the [1993 NFL Draft]. I flew Michael up to Dallas. I sat down with him. I told him I was gonna draft him. And because he came from a little school, you know I was always looking for a bargain, Texas Southern, and so I was thinking I could get him late in the second round. I sent our scout who was sitting in your home cause I’m gonna call you and say ‘Michael, you’re a Dallas Cowboy.’

“Well, New York jumped in front of me, so I wasn’t able to draft you. But it turned out pretty good for you. You won a Super Bowl with the Giants, and I did okay myself.”

Still, it makes you wonder how things would have turned out had the Cowboys drafted Strahan. It’s not as though the franchise suffered in the years to come. They would also win the Super Bowl in 1995 before the franchise finally started to fall apart at the end of the decade. Perhaps having a defensive anchor like Strahan could have helped keep the Cowboys dynasty from their demise (though given that Jerry Jones still would have been Jerry Jones, it’s hard to think that was avoidable).