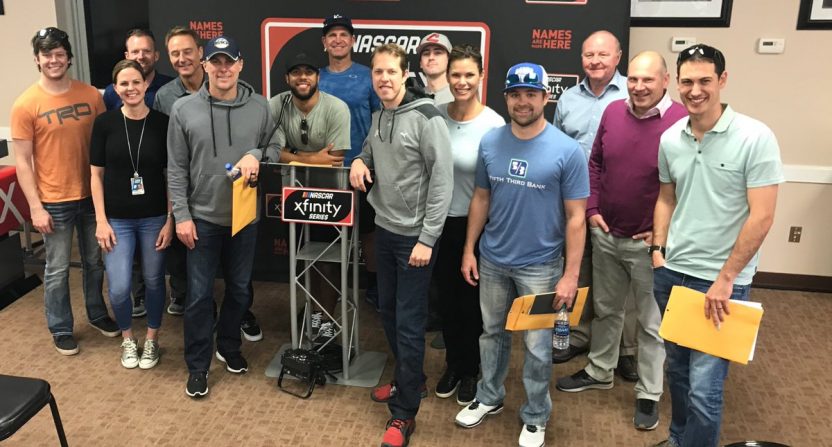 Fox kept the majority of the crew together as last year. Of the eight driver crew, only Darrell “Bubba” Wallace Jr. and Brad Keselowski were newcomers while Ricky Stenhouse Jr. moved from the pits to the Hollywood Hotel.

REMINDER: The 2018 #DriversOnly broadcast is NEXT on your local FOX channel. The fun begins after Monster Energy Series qualifying from Talladega. pic.twitter.com/tc4Wtyso5P

Kevin Harvick lead the broadcast with play-by-play duties just like last year. But Harvick wasn’t anywhere to be seen at the start. Because Cup qualifying was right before the Xfinity Series race, Harvick had to celebrate winning the pole for Sunday’s race and needed to do media and PR commitments as the pole winner. That meant Joey Logano temporarily took over the start of the broadcast, though it wasn’t long before Harvick got changed from his fire suit to his business suit and joined the broadcast.

Unlike Pocono, where the cars can be spread out and strategy prevails, Talladega is hectic with cars changing positions everywhere. Sometimes, the broadcast can get also hectic along with the racing, but everyone kept cool and were on top of everything. The three in the booth were certainly excited about the race, but it may not have always translated to the broadcast.

For instance, in this multi-car crash, the guys in the booth aren’t really reacting to the crash. Maybe it’s because they’re all racers who know something like this was bound to happen and weren’t surprised but that’s a race changing moment that could use a bit of a pick-me-up. Don’t get me wrong, I would much rather have broadcasters who are understated in their commentary than completely over-the-top, but there’s certainly a middle ground there.

All in all, the broadcast seemed like what you would see if these eight guys were hanging out, drinking some beer, eating some food and watching the race. While there was no beer, the drivers were certainly fed well and were cracking one-liners off each other.

.@KevinHarvick was a little late … but he had a good excuse (he won the POLE).

Here are some of our favorite moments from Saturday's #DriversOnly broadcast. pic.twitter.com/aEG4igcyuA

There’s a bit of a method to the madness when it comes to picking who gets to be a part of this broadcast. It isn’t just getting eight drivers and plopping them into whatever role, Fox is trying to make a great broadcast and want people who are going to be not only great at what they’re doing but have great chemistry with each other.

You can tell these eight are friendly off the track, and that shows in the broadcast. There was the occasional complaint from fans that Fox had too many Ford drivers but that was the last thing Fox was thinking of when they were planning this broadcast. Yes, there were six Ford drivers, one Chevy driver and one Toyota driver but the drivers did a great job separating their sponsorship and manufacturer ties and were impartial throughout the race.

Honestly, if Saturday’s race was the first time I ever watched a NASCAR race, I never would have known what kinds of cars these people drove on Sunday’s. The only times any of the drivers mentioned anything about being affiliated with any of the teams was Bubba Wallace saying his #43 pit crew was pitting Ryan Truex’s car and Joey Logano mentioning that he had previously won in the #22. If you’re a Chevy or Toyota fan and were upset that there weren’t enough of your drivers on the broadcast, fine. But it’s not like anybody was endlessly plugging their make of car or sponsors throughout the broadcast. What each driver drove on Sunday was inconsequential to the broadcast.

When pro athletes, whether active or retired, are part of a race broadcast, it can be tough to separate the athlete and the broadcaster. It can be very easy to say “we” when talking about a team you have been a part of and that habit can be hard to break. For these drivers to not have that problem, especially when they were talking about teams they currently race for, showed me that they were very impartial.

RETWEET TO CONGRATULATE SPENCER GALLAGHER ON HIS FIRST @NASCAR_Xfinity WIN!

After the race suprisingly became a race about fuel strategy, it came back to an overtime finish suitable for Talladega. Spencer Gallagher won his first Xfinity Series race while only leading the final lap. Just like last year, Ryan Blaney won the right to interview the winner so he went to Victory Lane to interview Gallagher.

In terms of the pit reporters, some people felt Blaney and Erik Jones were a bit tough to hear while on pit road and I would have to agree. It normally isn’t a problem for them when speaking since they aren’t usually trying to speak over a bunch of cars going 200 mph, but they needed to project their voices to better compensate for the noise.

It’s much easier for someone to lower a reporter’s sound level when they need to than having to raise their sound level. If they raise their sound level, they raise the sound of the ambient noise and that just makes the cars louder. If the reporter has projected their voice and made their voice a bit louder, the sound person can lower their level when there are no cars around them and then keep it as is when there’s ambient noise.

Apart from a couple things, this was a great broadcast and something everyone should be proud of. I really thought of the eight, Harvick, Bowyer ,and Wallace seemed the most natural in their element. There were times where everyone was a bit nervous and I can’t blame them, but those three seemed the least nervous.

Considering Fox had a second Drivers Only broadcast, it’s safe to assume that if they are going to make this a yearly event. This is a fun and popular concept that fans now look forward to every year but it’s great as an annual event. If Fox were to make it a weekly or monthly event, this wouldn’t be as special. Also, NASCAR Cup drivers have busy schedules and that gets compounded doing the kind of research needed to broadcast a race.

So while Kevin Harvick would love to be in the booth whenever he can and want to do this after his driving career is over, his main priority is still driving a race car on Sunday, not to mention doing fan and sponsor events in addition to media commitments throughout the race weekend. Too much of a good thing is a bad thing, so let’s keep this special and do it once a year.