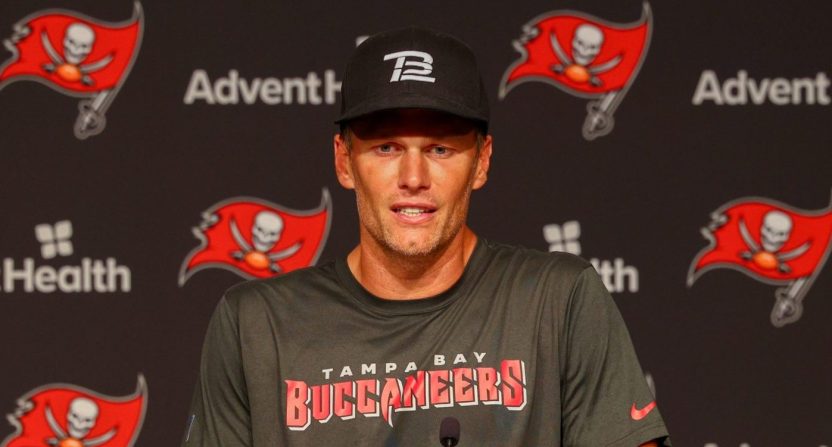 While the 3-5 Tampa Bay Buccaneers don’t appear to be a championship contender this season, Fox seems inclined to make sure Tom Brady remains a big part of Super Bowl LVII.

According to a report from Michael McCarthy of Front Office Sports, Fox is already trying to figure out ways of using the 45-year-old quarterback during its Super Bowl coverage from Glendale, AZ, Feb. 12, 2023.

“If he’s not playing in the game, I would expect Brady to be part of Fox’s Super Bowl coverage,” an unnamed source reportedly told FOS. “Definitely. I would be very surprised if he isn’t.”

Shortly after Brady ended his 40-day retirement and returned to the Buccaneers, Fox announced they signed the future Hall of Famer to a reported 10-year, $375 million contract to serve as their lead analyst whenever he decides to stop playing for good. Still, Fox probably expected there was a better chance Brady would be playing in Super Bowl LVII than there was of him providing analysis for it.

The most likely use of Brady for Fox’s Super Bowl coverage is to feature the quarterback as a studio analyst alongside Terry Bradshaw, Michael Strahan, Howie Long, Jimmy Johnson, Curt Menefee, and Jay Glazer.

There is, however, an outside chance that Fox could create a three-person broadcast booth for the Super Bowl, adding Brady to its No. 1 team of Kevin Burkhardt and Greg Olsen. That option sounds like an awful idea. Fox, Olsen and Burkhardt will already be under added scrutiny in Super Bowl LVII considering they let Joe Buck and Troy Aikman leave for ESPN. Similarly, Brady will be under a lot of scrutiny when he makes his booth debut considering Fox gave him $375 million to be an analyst without ever hearing him call a game live.

Super Bowl LVII will be the first time Fox has an announcing crew other than Buck and Aikman working the Big Game since Pat Summerall and John Madden were on the call for the network in 2002. Burkhardt and Olsen are currently in their second season together and are generally well-received as a team. Why mess that up by forcing Brady into the booth?

There also remains the possibility that Brady doesn’t retire following the season. Considering the on and off the field hurdles Brady has endured this year, announcing his second retirement at the end of the season seems likely. But if Brady decides to take his talents to South Beach or anywhere else to continue playing, then his Fox contract wont kick in yet and all of the Super Bowl LVII talk might remain hearsay.