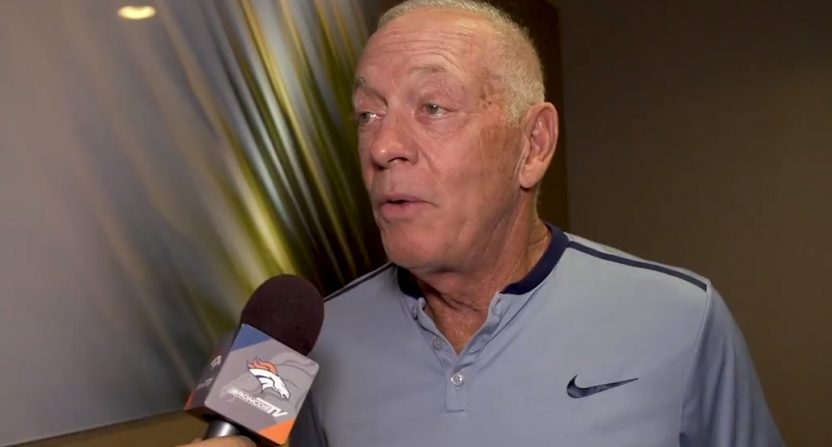 Dick Stockton has done just about everything there is to do in sports broadcasting, from the NBA Finals and Winter Olympics on CBS to Carlton Fisk’s Game 6 homer on NBC in 1975.

“I originally wanted to be a sports writer,” Stockton told The Post.

After graduating from Syracuse in 1964 with that goal in mind, Stockton took a slight turn into sportscasting, where his career has included narrating one of the most famous home runs in baseball history, becoming the voice of the legendary 1980s Lakers-Celtics NBA Finals and enjoying a run that spanned CBS, TNT and, for nearly the last three decades, Fox Sports.

Now, after 55 years and on his own accord, he is retiring.

“I just think it is time,” the 78-year-old Stockton said.

For the last few decades, Stockton has been with Fox Sports, calling NFL and MLB games, including working NFL games amidst the pandemic this past fall. His most famous moment still may be the Fisk homer, which came very early in his broadcasting career and at a time when a local broadcaster with limited experience could get the call to do an NBC World Series game.

From a great Tom Verducci piece on how that game impacted baseball’s viability as a televised sport:

A telegram arrived at the Lenox Hotel on Boylston Street in Boston during the last week of the 1975 regular season. It was addressed to a guest, Dick Stockton, a 32-year-old broadcaster who was wrapping up his first season calling play-by-play for the Red Sox. Stockton’s timing was superb. The Red Sox won 95 games, their most since 1949.

The telegram was a bonus for the rookie announcer. Stockton, who only 12 months earlier had been a freelancer for a Boston NBC station with no baseball experience, ripped open the envelope. He hardly could believe the typewritten words:

“We are pleased to advise you of your nomination and approval to work with us during the 1975 World Series for the telecast of the first and sixth game. $500 a game. Please do not include the color blue in your wardrobe. Good luck. Chet Simmons, NBC Sports.”

Today the telegram is framed and hanging on the wall of Stockton’s Florida home.

Stockton talked to Marchand about how pivotal that call was for his career:

“It is strictly instinctive, at that time,” Stockton said. “If I had said that ball was foul and it was a home run, I wouldn’t be talking to you right now.

Marchand also has this quote from Fox Sports CEO Eric Shanks, who has known and worked with Stockton for decades:

“I always said that, ‘Dick Stockton could do games here as long as he possibly wanted to do games here,’” Shanks said. “I will take Dick Stockton, on his worst day rolling out of bed, over almost any other play-by-play guy’s best day. When he called me [to tell me he was retiring,] I was upset. I was emotional. I really didn’t think he would call it right now. I’m sad.”

In recent years, Stockton has worked a lighter schedule, but Shanks said Stockton’s attitude toward how to create the right atmosphere for broadcasts is threaded through Fox Sports.

Stockton is clearly one of the last remaining voices of his broadcasting generation, and he’s in multiple Halls of Fame for a reason. But 55 years and working a dream job until you’re 78 is a hell of a run for anyone. Hopefully he enjoys his retirement.