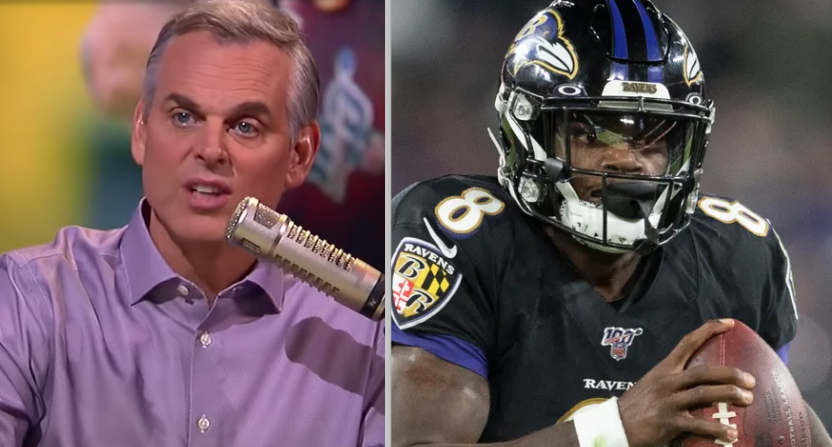 On-air pundits don’t often walk back or apologize for one of their takes when they’re wrong. Be bold, be outlandish, and stick to it, even in the face of ridicule. Admitting a mistake or owning up to being wrong is as difficult for them as it was for The Fonz.

So when Fox Sports’ Colin Cowherd admitted that he was wrong about the Baltimore Ravens on Monday’s edition of “The Herd” and apologized for what he called a “horrible” take, it was especially notable. (The Ravens even took the opportunity to highlight Cowherd’s mea culpa on their website.)

Plenty of NFL fans and observers had their eyes opened by the Ravens’ 37-20 bulldozing of the previously undefeated New England Patriots on Sunday Night Football. Those who had no idea of how good the Ravens or the dazzling emergence of quarterback Lamar Jackson halfway through his second NFL season received an education. Count Cowherd among those who did some learning, apparently.

More specifically, Cowherd was apologizing for his assertion on Friday’s show that the Cleveland Browns would eventually overtake Baltimore in the AFC North standings. Actually, he said the Browns would take over first place in a month. Cleveland, as he saw it, had an easier schedule in the second half of the season than the Ravens. Additionally, the Browns stomped Baltimore in their head-to-head Week 4 matchup, 40-25.

For his "worst football take ever:" pic.twitter.com/rjJ0xJ7aOq

“I’m embarrassing,” Cowherd said. “I apologize. I have told my staff to take it off the archive. It is my worst football take ever. Everything that matters to me, I bailed on because I couldn’t get over the schedules.”

He elaborated on his mistake by praising how much better head coach John Harbaugh, Jackson, team ownership, and general manager Eric DeCosta (and his predecessor, Ozzie Newsome) are at their jobs than their counterparts in Cleveland. All four check his boxes for success in the NFL.

Was Cowherd’s initial take attempting to hold onto those outsized preseason expectations for the Browns? Perhaps. Yet what had that team done over the past month to warrant that kind of belief?

Since defeating Baltimore in Week 4, Cleveland has lost four consecutive games (three when Cowherd made his declaration). The Browns’ 24-19 loss to Denver in Week 9 may have been one of its most embarrassing, with Odell Beckham Jr. and Jarvis Landry being forced to change their shoes at halftime, and Jermaine Whitehead threatening fans on Twitter after the game, resulting in his release.

But let’s give Cowherd some credit for admitting he was wrong. And apologizing! People in his position don’t often do so, opting instead to double down on bad takes and terrible opinions. With this, Cowherd did something even The Fonz couldn’t do. And Fonzie’s cool!