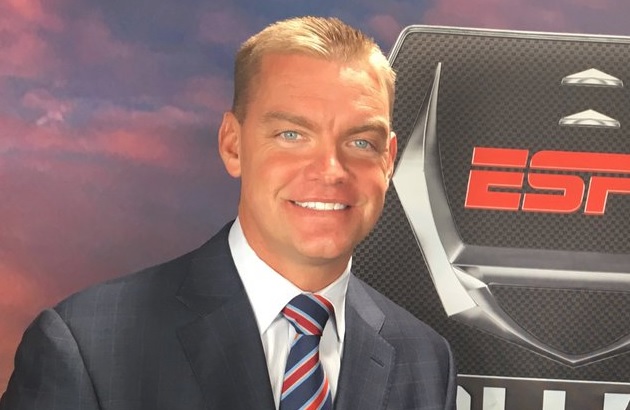 Brady Quinn has been a prominent game analyst on Fox’s college football coverage, but he’s heading to their new studio show (alongside Urban Meyer , Reggie Bush, Matt Leinart and Rob Stone) this fall. And Fox is going outside the company to replace him, with Andrew Marchand of The New York Post reporting early Wednesday that they’re “in agreement” with ESPN’s Brock Huard for Quinn’s spot.

Fox is in agreement with ESPN’s Brock Huard to become its No. 2 college football game analyst, sources told The Post.

Huard then announced the move himself on his daily ESPN 710 Seattle morning show Brock and Salk:

Here’s a transcript of the key part of that:

“Brock, before we answer any questions, can you answer what’s happening here in the newspapers? Are you on Page Six? Why are you in The New York Post? What have you been busted doing?” “Why am I on Page Six of the New York Post? That’s a great question.” “The gossip column.” “Yeah.” “What’s the deal?” “I am leaving ESPN after 12 years. Yep, yep, yep, leaving ESPN after 12 years, and that’s a bummer for [[producer] Jimmy Zirolli and [director] Jimmy Platt, Bob Wischusen, Allison Williams, all the incredible people on our crew, many of whom I’ve been with for the last six or seven years.” “You should clarify that you have separate contracts with this station and with ESPN television.” “Correct. …It’s different, totally different entity, totally different path.”

“So I’m leaving there and getting an opportunity, a huge opportunity, and as big of a bummer as it is leaving ESPN, it’s as huge of a gift and an opportunity to join Fox on their college football broadcasts and join Joe Davis, who I worked with way back when on one of his first games when he filled in for Mark Jones. And I knew then this dude is talented, really good, they’ve got an incredible crew. Brady Quinn, who had been on that crew, they moved him to their studio with Urban Meyer, so they’re making a real commitment to college football and that’s fantastic. And they came knocking and the timing was just really good.”

(Huard goes on to talk about Fox’s coverage and the other people he’s excited to work with after that.)

It’s interesting to see this move, but it makes a fair bit of sense; Fox needed another experienced voice for the #2 crew with Quinn’s departure for the studio, and Huard certainly fits there. This also seems like a step up in the pecking order for him; while the Wischusen/Huard/Williams crew is well-respected and has worked plenty of big games, they were fifth in ESPN’s listing of commentator pairings last fall. That’s not bad overall considering that there were 19 pairings listed there, but the number-two slot at Fox does seem more prominent.

This could lead to some further changes at ESPN, where we don’t yet know the commentator pairings for this fall (they’re usually released in July or early August). The analysts ahead of Huard in last year’s listing were Kirk Herbstreit, Todd Blackledge, Brian Griese and Greg McElroy, with Rod Gilmore, Dusty Dvoracek and Anthony Becht the next three down. Any of those latter three could slide up.

But another name to maybe keep an eye on is Dan Orlovsky. Orlovsky only joined ESPN last year, but received a prominent studio role for both college football and NFL shows pretty early on, and also wound up calling some college games with Clay Matvick and Paul Carcaterra (the 11th-listed pairing). He’s received a fair bit of praise so far, so it wouldn’t be that surprising to see him slide up the depth chart this season if they’re going to keep him as a game analyst in addition to his studio work.